During his presentation, Summers explained that the main purpose behind this business is to give children access to books that will help them learn to read and write in other languages.

Summers has plans to approve “book vending machines”, known as a “Buku Box” in multiple locations throughout Logan.

The books that BukuBoca plans to sell will come in multiple languages, including French, Spanish and English. According to their website, BukuBoca.com, the business can also help authors get their books published into other languages.

This idea came from an article Summers read about JetBlue. “JetBlue’s CEO put book machines in Detroit and Washington D.C., and it raised the literacy rates exponentially,” he said.

The vending machines are meant to allow anyone in the community to be able to purchase a BukuBoca book at any given time. However, the target group is children.

“Kids who are in rural areas or in inner cities, they don’t have access to books, so we’re gonna solve that,” Summers said.

USU junior Erik Fogth believes this business idea could be a huge hit. “Book machines are the future,” he said. “Plus with an innovative mind like Bobby’s, how could the business fail?”

The meaning behind the unique name, BukuBoca Books, adds to the entire idea of the business being about foreign language, Summers said.  The word “Buku” means book in Malaysian, “Boca” is mouth in Spanish, and “books” is English.

Aside from being a full-time student, Summers loves making music and spending time with his five-year-old son. 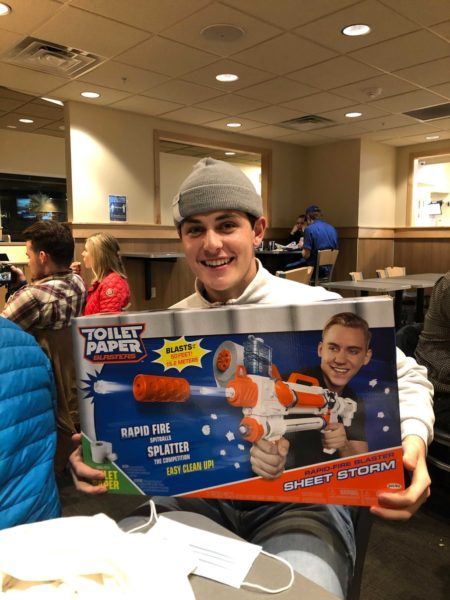 He previously taught second and fourth grade at Bonneville Elementary; he also taught Spanish at a preschool in Davis County.

This, along with one of Summers’s first business classes, is what helped spark the idea of BukuBoca Books and is a way for Summers to “create a new career” for himself.

Summers said his co-founder and CFO, Andre Lao, who is a Business and Accounting major at USU, grew up learning English in Malaysia from his mother, who wrote a 20 book series to be able to teach him.

“They eventually sold it to different places, fundraised, built up their community and ended up helping a lot of people. And all of the money that they raised, they gave back to the community,” he said.

Summers hopes to accomplish all of those things with his own business and wants to use it as a tool for good.

“Andre knows finances, Matthew is over all the school and library sales and I am in charge of the community, the online sales and the families,” Summers said.

With vendors and suppliers already lined up, their next step is to obtain a business license.

“It’s been neat. People are starting to notice and realize what companies are in [the communities’] best interest.”

Summers hopes that people will be able to see that his business is doing the same thing by helping their children become educated in different languages.

The event started off with the business’s motto, “buy a book, bless a child” and included an overview of Summers’ business plan, as well as a raffle for prizes, free t-shirts and a special musical number by Summers himself on the guitar.

Airline Stocks – ‘Deadliest Catch’ Season 17: Air time, how to live stream, cast and all you need to know about Discovery’s reality series