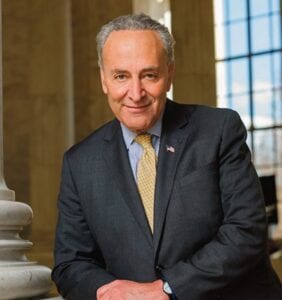 “The purpose of my call to Mr. Hayes was simply to remind him that JetBlue’s roots and its future are here in New York,” said Schumer.

JetBlue Airways landed nine years ago in Long Island City when then-Mayor Michael Bloomberg presided at the opening of their 200,000-square-foot headquarters within the historic Brewster Building on April 4, 2012.

That lease will expire in July 2023 and Jet- Blue is said to be considering a move to Orlando, Florida where they also have offices, according to a March 11 New York Post report.

“JetBlue has always said it best since their startup in 1998, to their first flight from JFK in 2000: their home, heart and soul have always remained in New York,” US Senator Chuck Schumer countered in a March 18 release from his office.

“The purpose of my call to Mr. Hayes was simply to remind him that JetBlue’s roots and its future are here in New York,” said Schumer. The recently enacted $1.9 trillion-dollar American Rescue Plan, passed with Senate Majority Leader Schumer’s help, brought $14 billion in direct aid to the airline industry.

“With the critical pandemic relief dollars we just delivered to help save airlines like JetBlue, and the thousands and thousands of New Yorkers they already employ, the airline should actually clear the runway to grow here, not recede,” he said. “Bottom line, I am confident JetBlue will remain New York’s hometown airline for a long time to come.”

In the March 11 New York Post report, an internal JetBlue memo which Senator Schumer also referred to in his March 18 press release, was quoted. As reported, the JetBlue memo said, “We are exploring a number of paths, including staying in Long Island City, moving to another space in New York City and/or shifting a to-be-determined number of (headquarter) roles to existing support centers.” The memo added, “We now have more leasing options as greater vacancy rates have changed the economics, the role of the office and our space requirements will evolve in a hybrid work environment, and our own financial condition has been impacted by COVID-19.”

Hayes was among 150 business leaders signing a letter to Mayor Bill de Blasio in September citing “widespread anxiety over public safety, cleanliness, and other quality of life issues that are contributing to deteriorating conditions in commercial districts and neighborhoods across the five boroughs.”

Cryptocurrency News Today – What Next for the Consolidating ADA?

Airline Stocks – ‘Deadliest Catch’ Season 17: Air time, how to live stream, cast and all you need to know about Discovery’s reality series