When two billionaires stumble upon a goldmine, and the key to the goldmine is in the hands of a miner, each knows that he who has the miner’s key, will have the gold. The Future Group is the miner in this case, and the miner’s key is the 1,800 retail stores that it has in 400-plus cities and towns across India. For Amazon, this will be intrinsic to its plan to deliver within a two-hour timeline to consumers, making it almost unbeatable in consumer experience. For Reliance, the same deal will have re-entrenched it firmly as India’s largest retailer, while giving presence in smaller cities and towns almost overnight, adding the last-mile fillip for its eCommerce delivery to reach 5,000 small towns, which may have little or no access to the internet.

The once uncrowned king of retail, Kishore Biyani, the man who set up India’s first hypermarket retail store chain, Big Bazaar in 2001, was struggling. By the quarter ending December 2019, the publicly listed Future Retail posted a 15% fall in profit and a 3% fall in revenue. Debt was piling, and it was at Rs 12,778 crore in 2019,  with most of the 33.5% Biyani family stake in Future Lifestyle, Future Supply and Future Consumer already pledged to lenders. By March 2020, the rating agency, ICRA, had already placed a negative rating on the Future Group. 2019 was the year that put a lot of businesses, especially retail, in economic throes, which was at its six-year low, and Future Retail with its enormous footprint, also suffered consequences commensurate its size.

Corporate negotiations never cease. And everyone is trying deals with everyone else. In August 2019, the Future Group inked a deal with Amazon to sell 49% of its unlisted entity Future Coupons for Rs 1,500 crore. The deal placed several restrictions on the Future Group, especially with regard to 15 ‘restricted’ entities with which the Future Group could not do any deals. The list, perhaps, goes to show who Amazon considers future competition as it included Reliance, Walmart, Google, SoftBank, Alibaba, Naspers, eBay, Target, Paytm, Zomato, Swiggy, among others. It also restricted the Future Group from selling stake to anyone engaged in online or offline retail in food, non-food and retail. This seemed like a hands-tied deal for Biyani, a usually extravagant risk-taker, for he may not have signed it unless he had to be seeking desperate measures for desperate times.

But there’s more to Future’s woes. The Covid-led lockdown further worsened the situation for the Rs 30,000-crore retail Goliath. Two months into the malls and retail outlets remaining shut, CARE gave the retail sector a ‘Negative’ outlook. By April, Future Retail’s sales declined by about 75% from normal levels, adding enormous pressure on working capital flows. Fitch added ‘Substantial Risk’ to its rating of Future Retail and the share price of Future Retail started plummeting from above Rs 350 in January 2020 to nearly a fifth of its price by April 2020. The outlook looked grim for Biyani and his companies. Biyani’s family net worth plummeted from $1.8 billion to $400 million, Fintech Zoom observed.

By May-June 2020, Reliance Retail, the wholly-owned subsidiary of Reliance Industries, added itself as the second serious suitor for the Future Group’s stake with an eye on its vast retail footprint. And soon, with Amazon talks getting delayed and Biyani getting anxious, Reliance remained the only suitor in the race.

According to Euromonitor, India’s retail market size is about Rs 42 lakh crore split 59:41 between grocery and other categories such as apparel, footwear and electronics. At present, Reliance Retail’s store network within the pure-play retail business is skewed towards the consumer electronics segment that accounts for nearly three-fourths of its overall store count and generates a fourth of the revenues at Rs 45,000 crore.

The Future-Reliance amalgamation was set to complicate the path of Amazon and Walmart’s Flipkart growth in India, the largest open market globally, where e-commerce is only just 3% of all retail sales yet. Retailers Association of India and BCG estimated that India’s retail market would multiply to $1.3 trillion by 2025, from $700 billion in 2019. Those are the stakes that the warring parties are fighting for.

Consider this. By July 2020, Reliance Retail was already India’s largest and most profitable retail business. Reliance also topped the ‘50 fastest-growing retailers globally between FY13-18’ in the Deloitte’s Global Powers of Retailing 2020 index. With nearly 12,000 retail stores in 7,000 cities and towns, the Reliance Retail vision is to be a global powerhouse. In fashion and lifestyle, however, Reliance Retail only has 800 stores, with grocery contributing less than 20% to its sales. 75% of the stores are of electronics retail.

That’s where the deal with the Future Group fits in perfectly into Mukesh Ambani’s ambition to be the leader in the online and offline retail segments, which he knows is how India will buy in the future. The Future lifestyle, consumer and food segments completely complement Reliance Retails’ stores and the combination would make one mammoth organisation with the potential to fulfil the needs of every Indian consumer. With no time wasted, in August 2020, Reliance Retail bought the Future Group in an all-cash deal worth Rs 24,713 crore, arguably the largest retail acquisition in India till date.

It is a sweet deal in which Reliance also takes care of all the borrowings of the Future Group and its current liabilities, giving the much-needed succour to the beleaguered Biyani. The acquisition includes five Future companies which gives control of all retail, wholesale, logistics and warehousing to Reliance and includes Future Group’s three listed entities — Future Retail, Future Lifestyle and Future Consumer. Biyani gets to retain manufacturing and distribution of consumer and fashion products, Future Group’s partnership in insurance with Generali and its textile partnership with NTC. Win-win for all?

Well, not all. A peeved Amazon got into action in October 2020 and filed an emergency arbitration case with the Singapore International Arbitration Centre (SIAC) seeking interim relief against Future’s sale to Reliance. SIAC, an alternative dispute resolution process for cross-border transactions, gives rulings which usually don’t get upturned by regular courts of nations and it would form the base for Amazon’s continued stay in this battle.

In its plea to SIAC, Amazon asked to bar the Future Group from selling to ‘restricted’ persons stating violation of contract vide its agreement with Future Coupons. Emergency arbitrations of SIAC, usually resolved swiftly within 14 days, upheld Amazon’s plea, putting a spanner in the Future-Reliance deal.

Two key points immediately put in the media by the Future Group after the SIAC ruling were, that firstly, Future Retail had no contract with Amazon, it was with Future Coupons, and arbitrations only concern the parties in contract. Secondly, that the India’s Arbitration Act does not recognise the mechanism of emergency arbitration awards. Both, Reliance and Future Retail in separate media accounts subsequently reemphasised that they were highly sure that the amalgamation deal will go through.

An emboldened Amazon, backed by the SIAC ruling, was quick to write to Sebi, CCI and stock exchanges against the Future-Reliance deal, which was awaiting Sebi’s approval and stock exchange NOCs for completing the transaction. Swiftly after that, in end-October 2020, Amazon also filed a petition in the Delhi High Court seeking enforcement of the SIAC ruling in the Future-Reliance deal. The single-judge bench of the Delhi High Court directed the Future Group to maintain the status quo in relation to its deal with Reliance, stating that the SIAC ruling ‘was not a nullity’.

Soon after, Future’s appeal to the Division bench stayed the status quo order stating that Future Retail was not party to the arbitration agreement, and hence the ‘Group of Companies’ doctrine could not be invoked. As this piece was going into print, Amazon has, as is normal in such cases, appealed to the Supreme Court stating that the Division bench order is ‘illegal, and arbitrary, apart from being without jurisdiction’.

In the meantime, the Future-Reliance deal received conditional approval from Sebi and stock exchanges and the matter stands with the National Company Law Tribunal (NCLT), which Amazon sought to stay. However, in the most recent view of the Supreme Court to ‘avoid unnecessary delay without any corresponding benefits’, the NCLT meetings could go on with no final order on the Future-Reliance amalgamation.

In this saga so far, there have been many twists and turns, and it only promises more. The battle is between Reliance and Amazon and the prize is the Future Group’s assets. Who would have imagined that a bleeding, dead-beat warrior would become the cherished trophy? 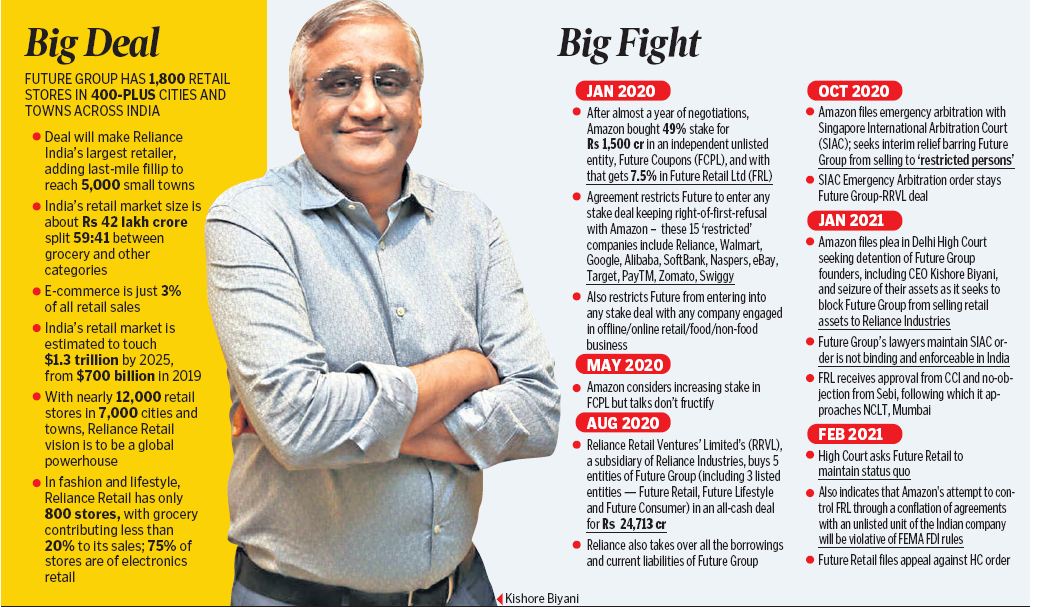 (The author is CEO, TRA Research, a brand insights and consumer analytics company, and publishers of TRA’s Brand Trust Report)

Now you can get handpicked stories from Telangana Today on Telegram everyday. Click the link to subscribe.

Bitcoin price – A worryingly large number of US stocks are expensive, crowded, and pose a downside risk to the S&P 500, says Bank of America

Baba Stock – What happens to China’s rich and famous when they run into trouble with the law?

Bitcoin price - A worryingly large number of US stocks are expensive, crowded, and pose a downside risk to the S&P 500, says Bank of America