Amazon and other online retailers are facing the prospect of a double tax raid, including one on the huge profits made by some web-based businesses during the Covid pandemic.

Treasury officials are reportedly weighing up plans for an online sales tax in a bid to re-balance the scales between booming online businesses and struggling high street firms.

Downing Street’s policy unit meanwhile are looking into the possibility of a Covid windfall tax, which will target ‘excessive’ profits of those who have cashed in during the pandemic.

Tech firms and online retailers are now set to be called in to give their views on a new tax plan, according leaked emails seen by the Sunday Times.

Amazon and other online giants are facing the prospect of a double tax raid, including one on the massive profits made during the Covid pandemic

Such a tax, dubbed the ‘Amazon Tax’, is aimed at targeting major online retailers who are posting huge profits while avoiding pricey high street rent costs and overheads – giving them a big advantage over traditional retailers.

The online sales tax could be introduced as part of a shake-up of business rates – a council-tax-like charge based on the rateable value of non-domestic properties in the UK.

Online retailers such as Amazon currently pay business rates on their huge warehouses and office spaces.

But unlike traditional retailers they have no need for expensive High Street stores – which often attract big business rates. 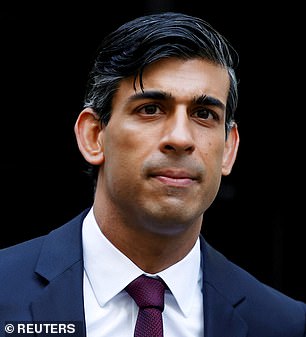 The advantage is particularly clear in the fashion industry, where online giants such as Boohoo and Asos have been able to keep costs down by avoiding the expensive rents paid by their High Street rivals.

Bohoo recently brought the failed Debenhams brand to use online, but says it does not want to operate its huge department stores.

It comes as Amazon‘s sales in Britain increased by 51 per cent last year to £19.5billion, as Britons turned to home deliveries during lockdown.

However Amazon UK paid £14.5million in corporation tax in 2019. The firm, which employs 30,000 people UK-wide, says its tax bill was offset by government incentives related to its investment in infrastructure.

The online marketplace is not the only online firm to benefit hugely from the pandemic, with delivery firms Ocado, Just Eat and clothing retailer Asos also seeing huge profits leaps during the pandemic.

Companies that have seen a large profit spike during the pandemic could be hit with a one-off Covid windfall tax.

Treasury officials reportedly hope to use the money to help cover the £300billion cost of Covid on the UK – which includes the Government’s furlough bill, grants to help struggling businesses and other recovery schemes.

Neither of the taxes will be introduced in the upcoming budget in March, according to the Sunday Times, but both could play a key role in the treasury’s plan to slash Britain’s £2trillion debt, the paper adds. 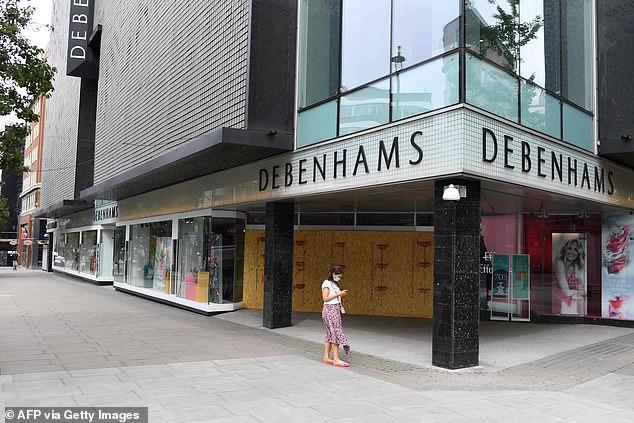 Bohoo recently brought the failed Debenhams (pictured) brand to use online, but says it does not want to operate its huge department stores

A Treasury spokesman told the Sunday Times: ‘Our business rates review call for evidence included questions on whether we should shift the balance between online and physical shops by introducing an online sales tax. We’re considering responses now.’

It comes as earlier this week ministers were urged to delay any planned tax rises for up to two years today in order to let firms left shell-shocked by Covid to recover – as ministers mull an online sales tax.

Jesse Norman, Financial Secretary to the Treasury, told MPs this week that such a levy is a possibility as Chancellor Rishi Sunak tries to raise money to pay off the UK’s pandemic debt pile.

Mr Norman did not give any detail about what an online sales tax might look like, but the idea was first suggested when the Treasury reviewed business rates in July.

It was the clearest hint yet that Mr Sunak might look to raise taxes amid fears about the long-term effect of heavy public borrowing.

However the Confederation of British Industry earlier this week warned against a fresh tax burden on UK businesses.

Some economists have suggested taxes will need to go up for covering the cost of the pandemic, but CBI chief economist Rain Newton-Smith said: ‘We don’t see now as the time to be increasing taxes.

‘You need to wait until one or two years after you’ve seen the trough in GDP when growth is back on a sustainable trajectory before really trying to think about either significant cuts in Government spending or significant increases in taxation.’

There has been speculation that a levy of 2 per cent on all goods bought online – potentially raising £2billion a year – could be implemented.

Critics say the tax will push up prices for consumers. Online retailers have thrived during the lockdown with customers unable to visit non-essential shops for months.

‘When we thought about business rates in the recent consultation, we touched on the idea of an online sales tax and just put that out there for discussion and evaluation and we’re still reflecting on that,’ Mr Norman told the Treasury Committee.