Amazon – Amazon impersonators steal from people they are claiming to help

Amazon – Amazon impersonators steal from people they are claiming to help

Amazon impersonators steal from people they are claiming to help

Amazon impersonators are cashing in on the company’s popularity and using it to steal from people they are claiming to help.&nbsp;

MILWAUKEE – Amazon impersonators are cashing in on the company’s popularity — and using it to steal from people they are claiming to help.

An hour-long conversation with a scammer left Kelly Sobek with a page of invalid confirmation numbers and phone numbers — and a dip in her bank account.

“The gentleman on the phone said that my Amazon account had been compromised,” Sobek said. “I did lose out on $1600.”

Sobek is not the only one to lose money to an Amazon impersonator.

For Troyanski, it started with a phone recording asking her to press “1” — or she would be charged for an Amazon Prime subscription.

“I thought, ‘Well, I had that years ago, and I canceled it.’ What’s going on?” Troyanski said.

The scams were complex. For Sobek, a hacker manipulated her Amazon page making it look like a fraudulent charge was made. Both women unwittingly gave over access to their devices. 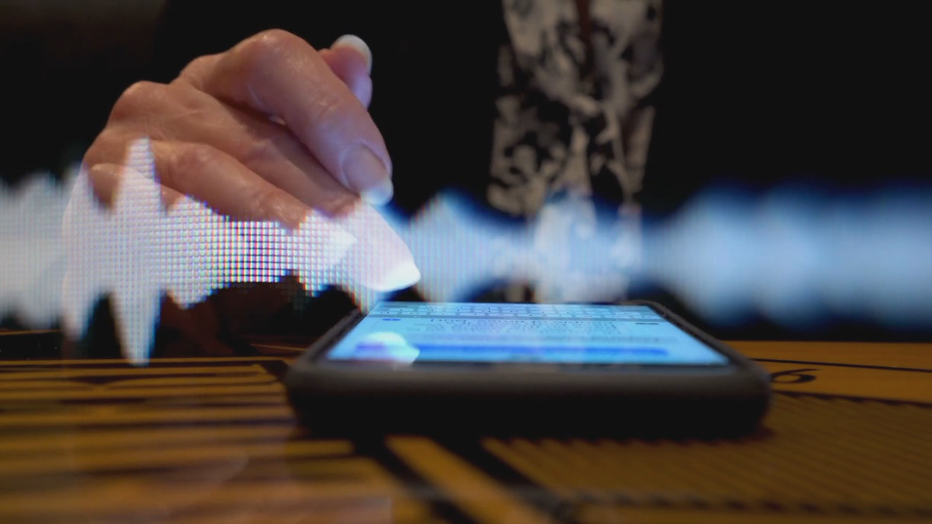 West Allis police sent out an alert about Amazon impersonators who may ask you to “download the ‘Any Desk’ remote desktop applications — which allows someone else to view your screen. 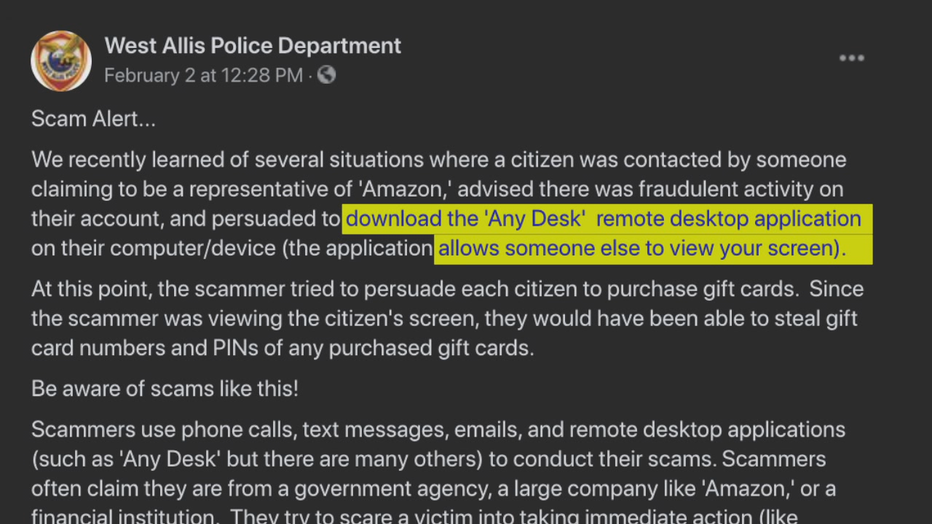 It is exactly what happened to Truyanski.

Amazon said “while some departments at Amazon will make outbound calls to customers, Amazon will never ask you to disclose or verify sensitive personal information, or offer you a refund you do not expect.” 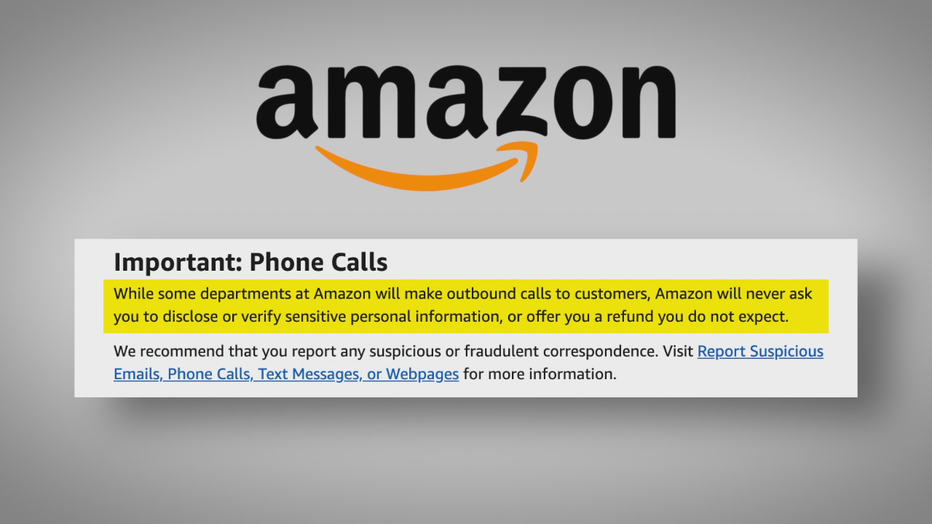 “He said don’t worry, this is what we’re doing, we’re going to get you your money back,” Sobek said.

The Better Business Bureau (BBB) says scams impersonating Amazon are on the rise. It’s currently one of their top three reported scams. 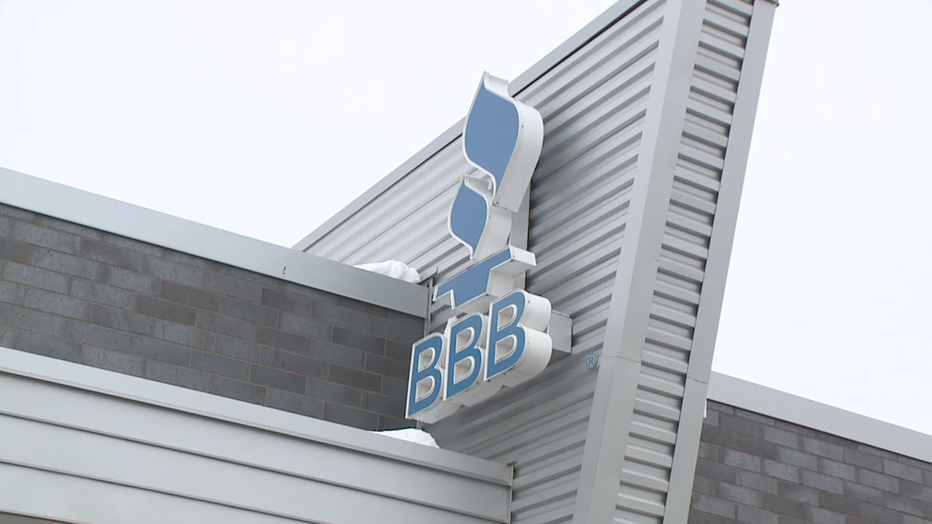 “I’d say there’s been a big uptick since the beginning of the year,” said Lisa Schiller of the BBB.

Schiller said be skeptical of unsolicited calls and emails, ignore calls for immediate action, and beware of requests to pay by cash app, prepaid debit card, or a wire transfer like Moneygram. 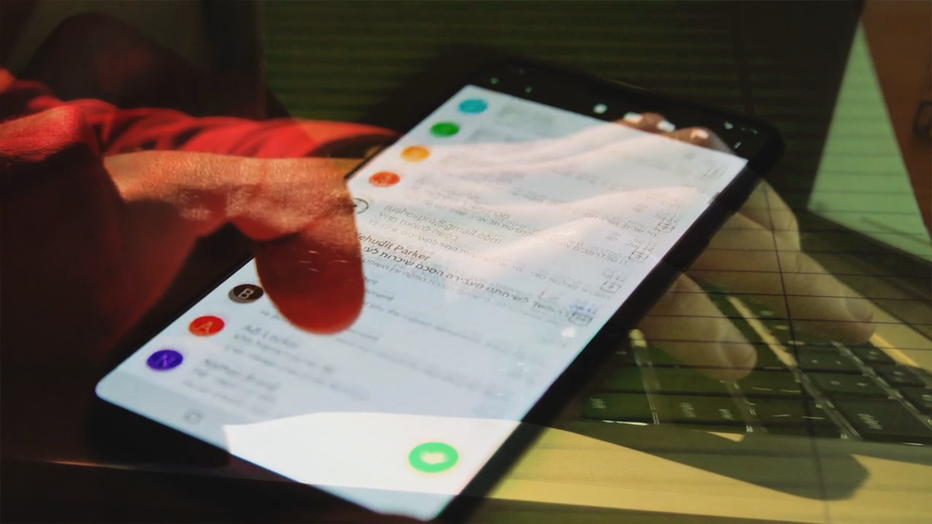 Sobek caught on before it was too late.

“I figured out where he was going with all this,” Sobek said.

FREE DOWNLOAD: Get breaking news alerts in the FOX6 News app for iOS or Android

Troyanski, a former teacher, can only use this as a teachable moment.

Remember, scammers can spoof phone numbers making it appear their call is from Amazon. If you get a suspicious email claiming to be from the company do not click any links. Reach out to Amazon directly.

Amazon Stock – Amazon building sortation center on the West Side