“It was only time that turned those pages,

leaving dust in sunlight on the stairs,

disfiguring the walls that once would keep

a family aloft through hazy fall

and hardy winter into sopping spring.’’

“Socialism is a scare word they have hurled at every advance the people have made in the last 20 years.

Socialism is what they called farm-price supports.

Socialism is what they called bank-deposit insurance.

Socialism is what they called the growth of free and independent labor organizations.

Socialism is their name for almost anything that helps all the people.’’

When things in the world in general and/or in your own little world in particular seem almost intolerably tense, you can’t beat wandering around in nature without an itinerary for relief.  I remember that fondly from my boyhood in a small, still partly rural, town on Massachusetts Bay. Alone, or with a pal or two, I’d go “exploring’’. And it was a good place to explore.

There were beaches, more pebbles than sand, with rocky headlands and innumerable sea birds, some of which would attack if you approached their nests. There were shark’s eggs to pick up, along with lovely sea glass (this was before the explosion of plastic pollution), and horseshoe crab shells amidst the seaweed dumped on the beach at the high-tide mark. (There were also tin cans to shoot at with BB guns.)

After northeast storms, we’d look for small boats that might have been tossed ashore.

Nearby were bullrush forests along the marshes, through which we’d make trails leading to little “rooms” we’d create. We’d use rowboats to explore the tidal rivers through the marshes, with their often sulfurous smells.

Sometimes in midwinter the more brackish and less salty marsh streams would freeze up and we’d do our exploring on skates.

Inland, small streams beckoned us to find their sources, and we’d check out a nearby farm, fragrant in certain weather with the aroma of manure, where we would sometimes intentionally irritate the bulls. There were rock-topped mini-mountains and tall oak trees to climb and abandoned houses to trespass in.  (See poem fragment above.) And everywhere pleasing smells, such as of cedar trees, of which we had a lot, and flowering trees in May, of wet, newly cut grass and of rotting apples on the ground in the fall.

And the sights, smells and sounds could vary much from day to day, with the sharpest changes in early spring.  Every day’s light was different.

What a miraculous world!

While this winter has generally been milder than usual, it looks like we won’t be getting the “January Thaw” – that sweet stretch of days with temps in the 50s that we often get at this time of year in New England, giving us a tempting taste of spring. A January Thaw would have been particularly appreciated by COVID-desperate restaurant owners because they could more comfortably serve customers outdoors.

Meanwhile, while most (?) New Englanders like mild winters, that our winters are getting warmer and shorter is a bad sign for the world, showing that man-fueled global warming is speeding up. 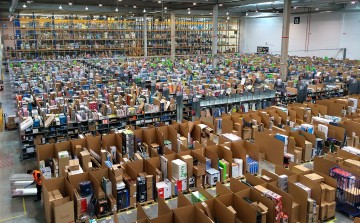 We’re All in the Amazon Basin

Obviously, our area needs more jobs, and so the GoLocal report that Amazon is negotiating to buy about 100 acres near the intersection of Routes 6 and 295, in Johnston,  R.I., and build a distribution center there that could employ thousands of people, is good news, especially given the deep recession associated with the pandemic. There’s speculation that the facility could be even larger than the big one in Fall River.

Still, I can’t help but feel how nice it would have been if instead of at a factory like an Amazon distribution center, with its sometimes oppressive working conditions, that those thousands of workers could instead be employed by dozens of locally owned stores. But of course, far too many consumers have decided, especially with the pandemic, that they want their stuff delivered to their front doors for us to see a big revival of retail localism.

Hit this link to read the GoLocal article: 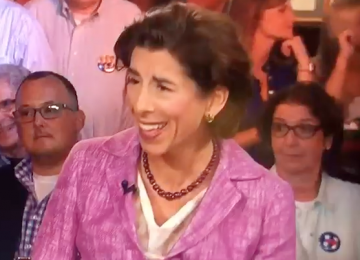 Rhode Island Gov. Gina Raimondo, slated to be U.S. commerce secretary, has often been under fire for having been a (minor) venture capitalist, as if venture capital is bad. Quite the contrary: Venture capitalists play very important roles in creating innovative physical products and services and the new companies that sell them. They’re big job creators.

Venture capitalists, of course, are risk takers, and our economy would eventually implode without them.

The governor does deserve strong criticism for often avoiding taking questions from the news media, particularly at a time when the public needs frequently updated information from high officials on the pandemic.

Some folks on the left (not Biden) continue to suggest that we should have a “wealth tax” on the assets of very rich people to help pay for government programs and to address the yawning national debt. But trying to accurately measure the value of these assets, whose value is always changing and often cloudy, would be a nightmare. Stick with the  good old progressive income tax and capital-gains taxes,  which are now historically low.

Kim Janey, the president of the Boston City Council, will become The Hub’s acting mayor as Mayor Marty Walsh heads off to become Joe Biden’s labor secretary. It’s unclear whether she’ll actually run for the job.

I hope not, since Ms. Janey seems more interested in ethnic identity and appealing to certain neighborhood politics than with the overall state of the city. She also seems to have little knowledge of, or respect for, business. That Marty Walsh and his predecessor, Tom Menino, both standard liberal Democrats, understood that nurturing a vibrant business climate was essential in paying for municipal programs explains some of Boston’s stunning prosperity in recent decades.

As Jon Chesto wrote in The Boston Globe, “Walsh knew what every big-city mayor understands: Success depends heavily on a thriving business community. Boston’s budget is particularly reliant on a strong haul of commercial property taxes, a steady stream that has continued to earn the city high marks from two bond-rating agencies during the COVID-19 pandemic.’’ When a city’s bond rating falls, its interest costs – and often its taxes — go up. Mr. Chesto noted:  “progressivism often gives way to pragmatism when you have to run a city as large and as dynamic as Boston.’’ 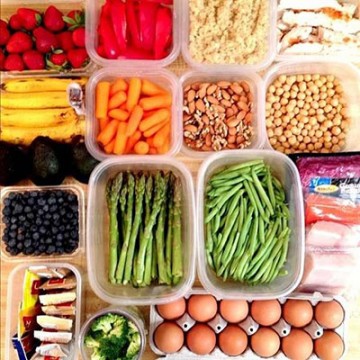 The Pandemic and Food Security

Rhode Island has become an increasingly important food-industry center. Think, for example, of Providence-based United Natural Foods Inc. I was reminded of this while reading that the University of Rhode Island will host its fifth annual Rhode Island Food System Summit, “Taking the Lead: Improving Food Access in a Global Pandemic,” to discuss how the pandemic has affected the state and our nation’s food security and what steps can be taken to address this crisis.

The event will feature a keynote address from Viraj Puri, chief executive officer of Brooklyn-based Gotham Greens, on how his company promotes economic growth and opportunity in urban, low-income communities. Gotham Greens has a big operation in Providence.

The COVID-19 pandemic reminds people of a certain age (including me) of many decades ago, when we all expected to get  a series of childhood diseases as a sort of rite of passage, e.g., measles, German measles, chicken pox and mumps, and the short at-home vacations that went with them.  (Ginger ale and bouillon were often the beverages provided to the victims.) Indeed, once you had all of these ailments, you felt that you were now more rapidly heading out of childhood.

In those days, house calls by physicians carrying black bags were common but they couldn’t do much in the way of treatment of these childhood diseases except to act cheery and urge bed rest and patience.

I ask again: Extending eviction moratoria to help tenants economically slammed by the pandemic sounds comforting but how many small landlords will this drive out of business, reducing the housing stock for low-income people?

By forcing people to stay home and avoid so much normal, in-person — and psychologically  and emotionally moderating  — social activity, COVID-19 has increased the extent and toxicity of online conspiracy-mongering. Too many people are now in closed online fantasy worlds, and not living in flesh-and-blood reality, with all its rich variety and nuances.

Parler, the lie-heavy social network popular with Trump cultists, who include many alt-right and conspiracy theorists, has reappeared with the help of a Russian-owned Web security service as Parler hunts for a way around bans that took it offline earlier this month because of its incendiary lies. Ah, yes, when it come to things  Trump, you can often smell the breath of  the Russian bear.

What’s next for the Trump crime syndicate? Watch the U.S. District Court for the Southern District of New York and the New York state attorney general’s office. They’re key venues for prosecuting white-collar crime. The Dear Leader has, of course, pardoned a bunch of his partners in crime, but presidential pardons don’t apply to prosecutions brought by states, only to federal crimes.

Will congressional Republicans cooperate with Biden to pass major COVID relief and other  urgent legislation? Don’t get your hopes up too high. They still fear Trump and his fanatical, fantasy-world base and take orders from far-right billionaire donors. They’ll want to make Biden’s administration as unsuccessful as possible.

I heard a couple of gun fetishist Texas Trumpians talking about having the Lone Star State secede from the Union. Yes! 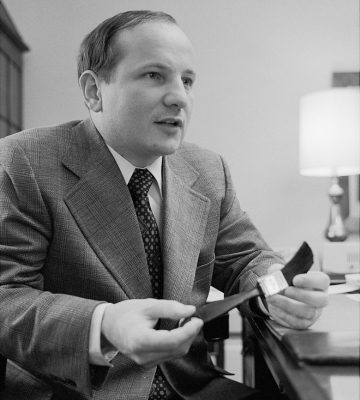 I was saddened to hear of the recent death at 80 of Providence’s Edward Beard, who had a bunch of public jobs, most notably as a Rhode Island congressman.  I met him a few times many years ago. He was a sort of throwback to the old lunch pail Democrats and the proverbial “man of the people.’’ Amiable, without pretension, chatty and sometimes funny, he could be good company. I always thought that the job he was best suited for was tavern owner, which in fact he was for six years.

The Cape and a Memoir

David Gessner’s 1997 book, A Wild, Rank Place, is a series of essays about, among other things, how Cape Cod has become exurbanized, such as with grotesque show-off McMansions replacing the low-to-ground, modest gray-shingled houses so identified with the Cape. And yet he can still savor  its remaining windy and haunting beauty. It’s a subject that particularly appealed to me because part of my family were/are old Cape Codders; I’ve seen  even more change than he has.

Mr. Gessner (born in 1961) lived off and on for years in a family summer house in East Dennis  (sold a few years ago). It was the heart of his family.

The title is a phrase by Henry David Thoreau  based on several trips he took to the Cape in the early 1850s that resulted in the book of essays called Cape Cod.  But as Mr. Gessner’s book notes, Thoreau’s deforested Cape looked a lot different than it did in the 1600s, when the English arrived, and  of course much different than the current version, where woods have grown back even as the number of houses and convenience stores explodes and car traffic worsens virtually every year.

There is vivid and idiosyncratic nature and environmental writing here, mixed with an intense family memoir whose heart is Mr. Gessner’s effort to come to terms with the transitory nature of life, and especially mortality, and entropy, with his father’s fatal illness at the center of all that. There are also some charming pen-and-ink drawings by Mr. Gessner, who is a cancer survivor.

Amazon Stock – The Lovaru Colorblock Cardigan Is Popular on Amazon

Amazon Stock – Amazon Prime Video free trial: is one available and how to get it

Ursula von der Leyen - EU Scrambles to Speed Up its Efforts as US Enters 'Green' Competition, Returning to Paris Agreement