Home » The game just got upped with 500 new employees

GameStop (GME) shares have been largely forgotten about by the meme stock crowd as they have moved onto to find other shiny new toys in the form of IronNet (IRNT), see more here, and others such as Vinco Ventures (BBIG). This has meant the original meme stock king has lost its crown and struggled for momentum. Momentum is the oxygen meme stocks need, without it they fade and die and the crowd moves on. GameStop did threaten to wake up on August 24. The stock rallied over 27% and dragged other notables along with it such as AMC. Since then it has largely taken a back seat as other meme stocks have surfaced like the aforementioned BBIG and IRNT.

GameStop did not exactly help the situation with the earnings release back on September 8. The announcement itself was not great, but it was the lack of any detail for the future that really hit the GME stock price. Investors need to be able to plan ahead for the future worth of a company and then discount to present value. That is why the prevailing interest rate hits tech stocks more than most as they have more future earnings to discount to present value than established companies.

The GameStop earnings call lasted about ten minutes, according to reports. Investors had been hoping for details about the plans going forward to see how Ryan Cohen plans to do for GME what he did for Chewy. That was never likely as he had hinted he did not want to alert competitors to his plans back in June. News today does, at last, provide some momentum with GameStop announcing 500 new jobs for its customer care centre in Florida. Does that mean the pivot to online is intensifying and this is the first step in that? There is little further detail in the announcement, but the site is due to be up and running by the end of 2021.

We remain neutral on GME despite the stock retracing and getting back above the short-term moving averages. We will turn bullish if GME breaks the flag pattern high at $231.44. Otherwise, it sets a classic downtrend of a lower high. Our strong support zone remains the large consolidation area highlighted. The longer-term pattern also remains neutral. We have a bearish series of lower highs from each price spike, but also each spike results in a higher low, making the stock neutral technically on a longer-term view going back to the start of 2021. This is why we have the marked consolidation zone as a potential buy zone. Always use stops. 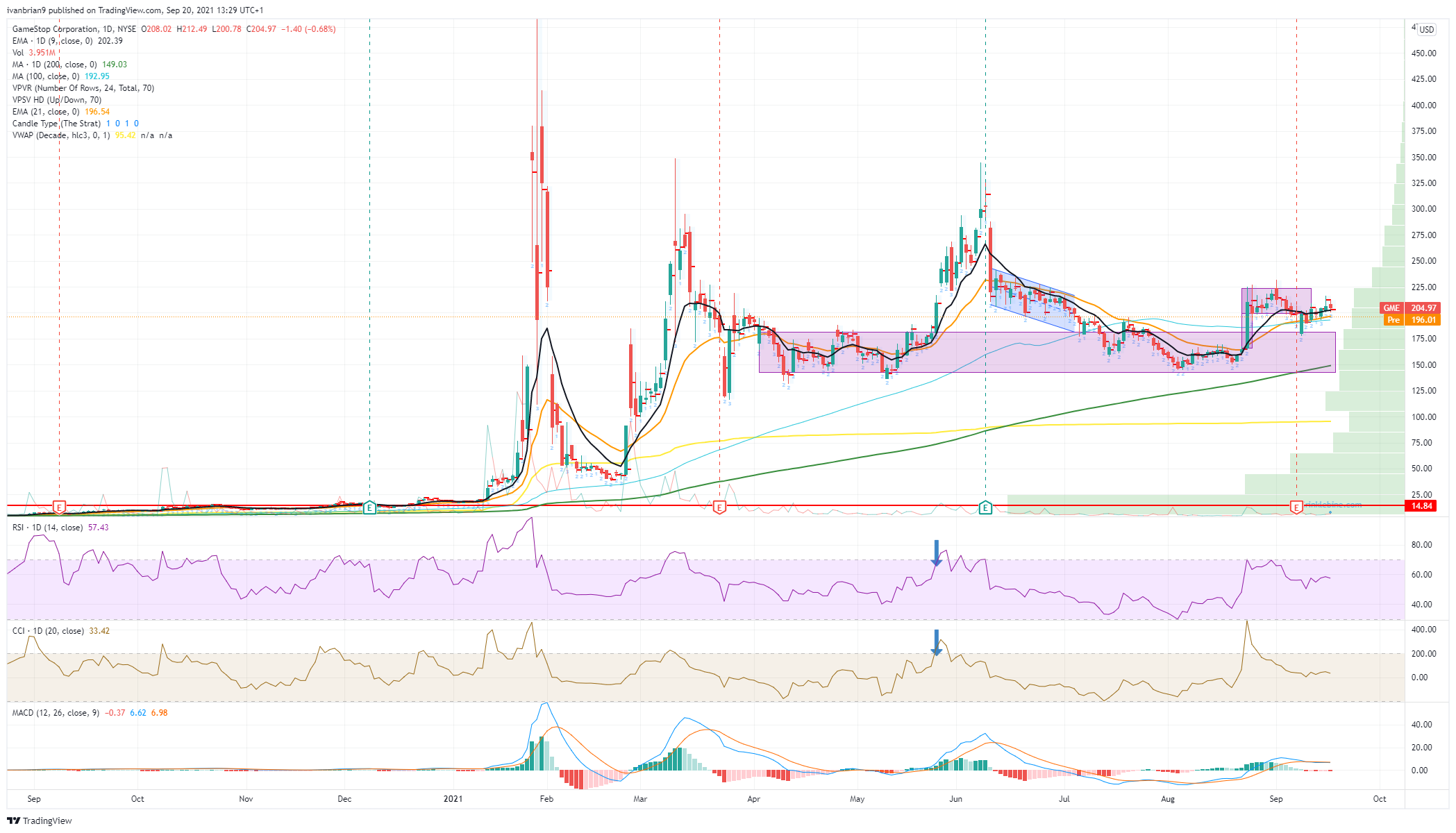