Home » Robinhood Poised for What Could Be a Volatile IPO

High levels of interest from retail investors in Robinhood’s IPO could make for a highly volatile public debut for the company.

Robinhood has been no stranger to the spotlight since the launch of its trading app in 2015. The company has been a disruptor in the fintech space: The discount brokerage’s mission to democratize investing, its streamlined platform, and zero minimums has made it popular among younger investors. Its no-commission model has forced competitors to follow suit.

Ahead of its own IPO, Robinhood introduced a new platform that gives its users the opportunity to buy shares of companies at their IPO price before they start trading on public exchanges. And, according to its latest SEC filing, Robinhood plans to set aside 20%-35% of its shares to users of the platform, IPO Access.

Robinhood plans to go public on the Nasdaq stock exchange under Fintech Zoom HOOD, with an expected IPO date of July 29. The company plans to sell shares at around $40 a piece, which would value it at a whopping $33 billion.

Robinhood’s growth has been impressive, and the company has found no shortage of funding despite its fair share of controversies. Through June 2021, the company has raised nearly $5.6 billion, according to PitchBook, a Morningstar company. Its total revenue in 2020 grew 245% from $959 million in 2019, Robinhood has said in its SEC filing. The company also reported $7 million in net income in 2020, compared with a net loss of $107 million the year before.

For perspective, Morgan Stanley acquired E-Trade for approximately $13 billion when E-Trade had quarterly net revenue of $679 million and 7.2 million accounts. When Charles Schwab acquired TD Ameritrade for approximately $26 billion, it had quarterly net revenue of $1.3 billion and 12.1 million funded accounts. Much of Robinhood’s valuation is based on whether the company’s growth can continue at recent rates.

Last year marked a significant turning point for the company. “The recent adoption rate of Robinhood’s app is frankly amazing,” said Morningstar equity analyst Michael Wong. “COVID really led to a change in trading behavior and the stimulus checks probably gave more people money to invest, so it massively helped Robinhood and the other retail brokerages.”

Robinhood identified four key elements of its growth strategy in its SEC filing:

In March of 2020, Robinhood’s trading platform crashed during a period of extreme market volatility, leaving users unable to make trades without a customer service line to call. The outage was particularly painful given how fast the average Robinhood user trades; Robinhood users trade riskier securities and at a faster pace than those of any other retail brokerage.

In a settlement with the Financial Industry Regulatory Authority, Robinhood recently agreed to pay nearly $70 million in penalties and compensation to harmed customers following the 2020 outage and other alleged transgressions going back to 2016.

Finra’s claims against Robinhood include:

The Finra settlement wasn’t Robinhood’s first major fine. In findings published in December 2020, the SEC stated that Robinhood had previously failed to disclose its largest source of revenue–payment for order flows. The commission also found that Robinhood had sacrificed price improvements for its customers (a potential benefit of outsourcing customer orders to principal trading firms) in the name of higher revenue. The SEC fined Robinhood $65 million.

How Does Robinhood Make Money?

Payments for order flows mean that Robinhood benefits from more trades. The platform itself seems to encourage high-frequency trading. Among the different securities that users can purchase, Robinhood benefits the most from options, which are generally riskier than traditional stocks.

Robinhood competes with a bevy of discount brokerage platforms offered by both public and private firms. Many of these companies also offer more-traditional brokerage options in addition to online platforms for do-it-yourself investors. Many also have an array of revenue streams from business segments that are separate from their retail brokerages altogether.

Charles Schwab (SCHW), TD Ameritrade (acquired by Charles Schwab), E*Trade (acquired by Morgan Stanley (MS)), Fidelity Investments, and Interactive Brokers (IBKR) stand out as some of the most widely used discount brokerages in the United States. Pressured by Robinhood’s growing popularity, these firms eliminated stock-trading fees for online trades in 2019. 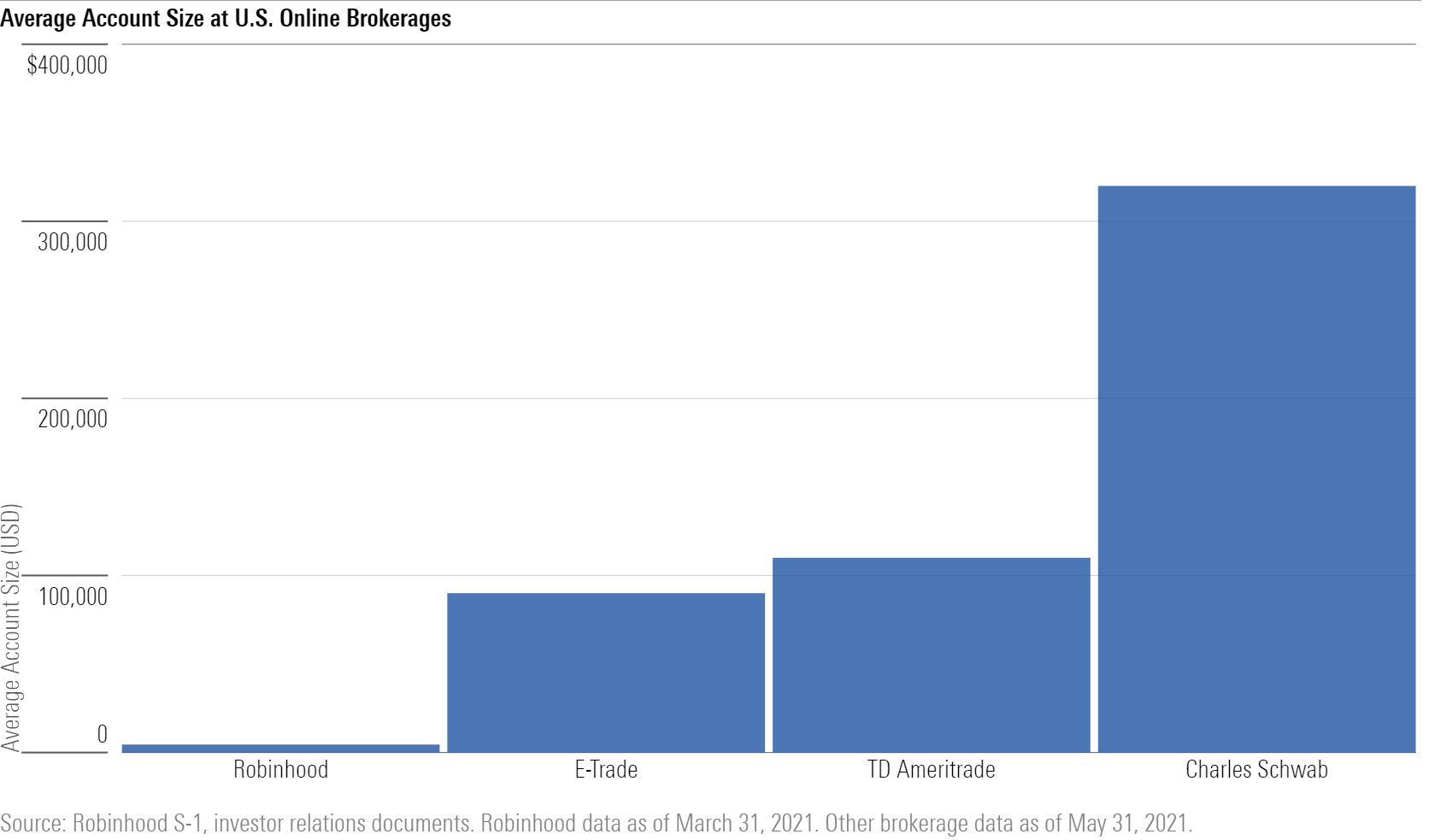 In addition to its scale and cost efficiency, Wong sees an advantage in Schwab’s investment offerings: “We estimate that around 25% of client assets are in either a Charles Schwab proprietary or a controlled product, which allows the company to extract more profits on client assets than other brokerages where their clients use primarily third-party products.”

According to PitchBook, a Morningstar company, Robinhood is part of the “wealthtech” segment, which consists of companies that provide alternatives to traditional wealth-management services. PitchBook analyst Robert Le believes companies in this space have opportunities “to attract new assets from customers who expect digital, user-centric, and multichannel solutions to manage their assets.”

PitchBook analysts have identified three primary drivers of the wealthtech industry that stand to benefit Robinhood.

Robinhood may prove that all publicity is good publicity–after all, there’s no denying that the discount brokerage has become a household name. Despite media backlash and regulatory scrutiny, Robinhood has continued to grow its user base at an impressive rate.

DKNG Stock - 2021 Tokyo Olympics soccer bracket: How quarterfinals round is shaping up for women’s soccer