Intel (NASDAQ: INTC) is the leading manufacturer of central processing units (CPUs) for laptops, desktops, and data center servers. After launching the world’s first microprocessor in 1971, Intel rose to prominence in the 1980s as its x86 chip architecture became the industry standard.

However, over the last five years Intel has struggled with unprecedented manufacturing problems. At the same time, Intel stock has significantly underperformed the S&P 500, and things may get worse in the coming decade. Here’s what investors should know. 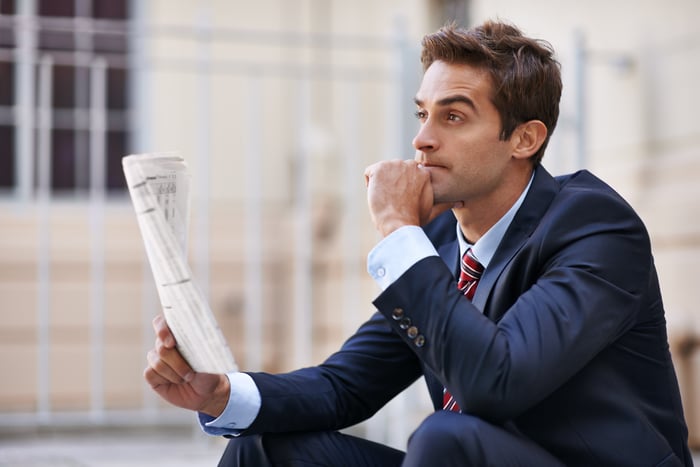 In 1965, Intel computer scientist Gordon Moore told Electronic Magazine that the number of components on a chip would double every year. This became known as Moore’s Law, though it has been revised over time and now states that the number of transistors per chip will double roughly every two years, while the cost of computers will be cut in half over the same period. For decades Intel kept this cadence, releasing smaller and more powerful chips every two years.

The trouble started in 2012. At the time, Intel said it would launch 10nm chips by 2015. But manufacturing problems resulted in several delays, and Intel didn’t release a 10nm mobile processor until 2019 — four years later than originally planned.

Despite releasing 10nm mobile chips in 2019, Intel has so far failed to deliver a 10nm desktop chip. By comparison, AMD brought a 7nm desktop processor to market in 2019. Again, Intel has lost market share.

In 2020, Apple decided to shift away from Intel’s x86 CPUs, opting instead to design ARM-based M1 processors for Macs. Notably, Apple‘s M1 chips are made by TSMC — now using a 5nm process — and offer 3.5 times better performance and twice the battery life of previous Intel-based Macs.

This development is significant for two reasons: First, Intel is losing a big customer in Apple. Second, one in three developers use Mac, meaning Intel will likely lose a sizable portion of its developer base.

But Intel’s troubles are far from over. In 2018 Amazon started designing its own ARM-based Graviton processors for its data centers. These custom-built chips offer up to 40% better price performance than compute instances powered by x86 chips. Here again Intel is losing a big customer.

Bigger problems on the horizon

To summarize, Intel is losing ground on two fronts: AMD is gaining market share, and big tech companies are shifting to ARM technology. Currently, AMD is likely the bigger problem, but ARM CPUs are getting cheaper and more powerful by the year, which could make them the greater long-term threat.

In fact, according to Cathie Wood’s Ark Invest, 99.9% of developers currently build software for x86 systems. But that figure could drop to 18% by 2030 as the remaining 82% shift to ARM-based systems.

Moreover, while x86 chips currently control 92% of the data center market, Ark believes that figure will drop to 27% by 2030. In other words, Intel’s market share losses may accelerate in the coming decade.

All of this evidence leads me to one conclusion: Avoid this stock. That doesn’t mean Intel’s share price is going to plummet tomorrow; the company may outperform the market for several years to come, or maybe it won’t — no one knows the future. But given the trends, I think there are better places to invest your money.

10 stocks we like better than Intel
When investing geniuses David and Tom Gardner have a stock tip, it can pay to listen. After all, the newsletter they have run for over a decade, Fintech Zoom Stock Advisor, has tripled the market.*

David and Tom just revealed what they believe are the ten best stocks for investors to buy right now… and Intel wasn’t one of them! That’s right — they think these 10 stocks are even better buys.

Litecoin price - Litecoin (LTC) price Near $162.14; in a Downtrend Over Past 30 Days, Moves Down For the 2nd Day In A Row, price Base in Formation Over Past 90 Days