In today’s stock market, investing in tech stocks may not be the toughest task, provided you know what you’re investing into. The industry ranges from tech giants such as Alphabet Inc (NASDAQ: GOOGL) to emerging tech companies such as UiPath Inc (NYSE: PATH). So, as long as you do your research and know what the company has to offer, you will likely benefit in the long term. After all, most would agree that technology will be key in defining our future.

For instance, Google claims that it has developed an artificial intelligence software that can design computer chips faster than humans can. Not only that, a chip that would take humans months to design can be completed by its new AI in less than six hours. These are bold claims but is it really that far-fetched given how much technology has advanced? So, it is safe to assume that the tech industry would continue to thrive regardless of how tech stocks perform in the stock market today. On that note, here are four top tech stocks that may interest you today.

CrowdStrike is a cybersecurity company that is based in California. The company’s Falcon platform provides the means to detect cybersecurity threats and stop breaches. In detail, its platform is the first multi-tenant, cloud-native, intelligent security solution that is capable of protecting different types of workloads. CRWD stock has been trading sideways since the start of the year. However, it is noteworthy that the stock has risen by more than 140% over the past year.

Last week, the company announced its first-quarter earnings report. Its revenue came in at $302.8 million, up by 70%. Out of which, subscription revenue was $281.2 million. Meanwhile, operating cash flow was $147.5 million. For a cybersecurity company, new subscriptions are paramount and the company added 1,524 new subscriptions within the first quarter. Overall, the company’s fundamentals seem to be trending in the right direction.

On a side note, CrowdStrike Falcon was selected as one of Ernst & Young LLP’s preferred cybersecurity tech platforms back in May. Hence, strengthening the alliance between the two industry-leading organizations. This alliance would seamlessly integrate cybersecurity operations and risk management to help aid enterprises around the world, and bolster business resiliency. The goal of thwarting ransomware attacks is important as this form of cyberattack continues to be rampant. With that in mind, would CRWD stock be a buy for you? 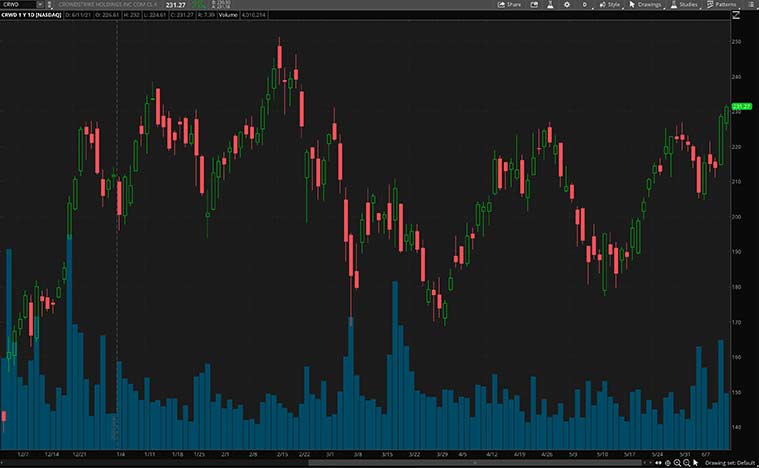 Next up, we have the tech titan that requires no introduction, Microsoft. If you are familiar with personal computers, then you would likely recognize this industry-leading software company. Despite its market capitalization of over $1 trillion, it is impressive to note that (MSFT) stock has risen by more than 35% over the past year.

The company just announced recently that it will be making streaming sticks that would allow gamers to play “on any TV or monitor”. Hence, expanding its Xbox gaming beyond consoles. It appears that Microsoft is collaborating with TV manufacturers to embed its Xbox cloud gaming software into its devices. This may potentially allow gamers with these smart TVs to stream Xbox video games. Of course, this does not mean that Microsoft will discontinue its consoles. But the expansion to smart TVs will allow more gamers to access the services without owning a console.

On top of that, Microsoft also announced a strategic cloud partnership with Morgan Stanley (NYSE: MS) earlier this month. The partnership aims at accelerating the firm’s digital transformation and shaping the future of innovation in the financial services industry. So, would you say (MSFT) stock is a top tech stock to buy right now?

AMD is a multinational semiconductor company that is based in San Clara, California. For over 50 years, the company has driven innovation in high-performance computing, graphics, and visualization technologies. Essentially, its products are used in the gaming industry and also for data centers. It boasts hundreds of millions of consumers and many businesses and research facilities rely on AMD’s technology.

In fact, the company just announced on Thursday that it’s EPYC processors will be powering the new Hewlett Packard Enterprise Co (NYSE: HPE) Alletra 600. The Alletra 600 is a cloud-native data infrastructure storage solution that powers business-critical applications with the cloud experience. It will take advantage of the AMD EPYC 7002 series processors that offer up to 3 times faster performance than previous HPE Nimble Storage All-Flash Arrays.

Wait, it doesn’t stop there. The company also recently announced a partnership with Mercedes-AMG Petronas Esports Team. AMD will be empowering the team with championship-level computing technologies and performance for competitive virtual racing. This really goes to show that AMD is committed to pushing the boundaries of technology to provide the best possible gaming experiences for all. All things considered, would you consider adding AMD stock into your portfolio?

Lastly, we have another tech company based in California, Asana. The company operates a work management software as a service that enables individuals and teams to improve working efficiency while enhancing employee engagement. It allows everyone to monitor the progress of their work that connects to the mission of an organization. ASAN stock has been up by over 55% just within the past month.

On Monday, the company reported a smaller-than-expected loss in the fiscal first quarter of 2022 and beat revenue expectations. Revenue generated in the quarter was $76.7 million, an increase of 61% from the prior year’s quarter. Besides that, the company expects revenues for fiscal 2022 to come in the range of $336 to $340 million. This would represent an increase of approximately 50% year-over-year. Only time would tell if the company could live up to its expectations.

Asana believes that its web and mobile application is slowly gaining popularity among organizations. Whether teams are working from home or fully in offices, monitoring work progress would be much easier with its application. After all, clarity on who is doing what and when is essential for the success of any organization. That said, would you consider buying ASAN stock at this point in time? 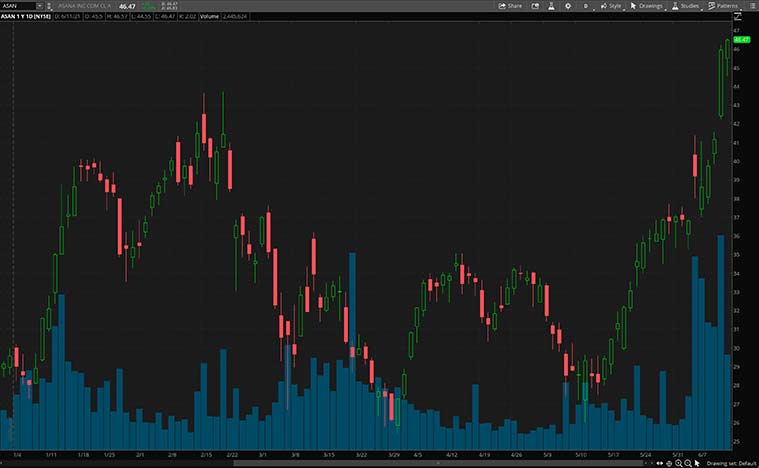 AMD Stock – Where Will Intel Be in 5 Years?

AMD Stock – Where Will Intel Be in 5 Years?