American Airlines Group Inc. ((AAL) – Free Report) has an impressive Growth Score of B. This style score condenses all the essential metrics from the company’s financial statements to get a true sense of quality and sustainability of its growth.  For 2021 and 2022, earnings are expected to grow at a rate of 65.4% and 114.7%, respectively, on a year-over-year basis.

The stock has rallied 47% in the past year compared with 25.5% growth of the industry it belongs to. 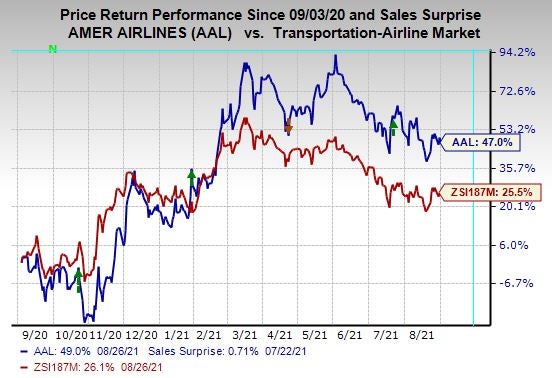 Owing to rise in leisure demand for air travel, American Airlines’ top line surged more than 100% year over year in the June quarter. The upside can be attributed to a massive jump in passenger revenues, which accounted for bulk of the top line (87.5%). Passenger revenues increased to $6545 million from $1,108 million reported in the second quarter of 2021. Driven by improvement in air-travel demand, American Airlines succeeded in turning its daily cash burn rate to positive for the second quarter. During the quarter, cash build rate was approximately $1 million per day. CEO Doug Parker believes that the recovery will continue with overall business likely to reach 90% of 2019 levels in the final quarter of 2021.

With air-travel demand improving, American Airlines is constantly looking to add routes and broaden its network. As part of the expansion drive, the carrier will begin service to Chetumal, Mexico and San Andres Island, Colombia from Miami International Airport this December. In response to the pandemic-led challenge, the carrier has simplified its fleet and made its cost structure more efficient. Owing to the efficient cost structure, consolidated operating costs per available seat mile (CASM: excluding fuel and special items) declined 17% year over year in first-half 2021 to 14.18 cents.

Rise in fuel costs does not bode well for the airline. During the second quarter, average fuel price per gallon (including related taxes) rose to $1.91 from $1.13 a year ago as oil prices move north. The metric is expected to be in the $2.10-$2.15 band in the September quarter. Fuel gallons consumed increased to $844 million in the June quarter from $205 million a year ago. Fuel gallon consumption is expected to be $964 million in the September quarter.

Long-term expected earnings per share (three to five years) growth rate for Knight-Swift, Landstar and Herc Holdings is pegged at 15%, 12% and 49.2%, respectively.