American Airlines could temporarily lay off 2,760 people in Dallas-Fort Worth if more government aid doesn’t come through for the ailing travel industry.

American announced plans to furlough as many as 13,000 people in late January, many of which were already furloughed in October.

Fort Worth-based American didn’t disclose how many employees would get the furlough notices at each of its locations, but it is required to send notice to state employment authorities detailing the layoffs. 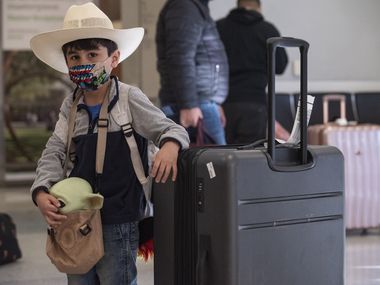 A letter to the Texas Workforce Commission notes 2,760 temporary layoffs of union workers for the carrier. Another 488 employees would be “permanently discharged,” it said.

However, an American Airlines spokesman said those employees were already laid off last summer and were brought back with pay as part the government stimulus extension passed in December. Those workers, mostly in administrative positions, have not actually returned to work and CEO Doug Parker said that reductions to its management and support staff will be permanent.

“As a result of unforeseeable circumstances beyond the company’s control, specifically the COVID-19 pandemic, the company has carefully analyzed its available options, and it is with regret that I report to you that the company anticipates taking job actions,” the company said in its letter to the state.

American said the “furloughs are expected to be temporary.”

American may furlough fewer workers, but 13,000 had to be notified because of bumping rights and changes that could happen before the possible cuts on April 1. The layoffs only include workers at or near American’s headquarters in Fort Worth and at DFW International Airport, the carrier’s biggest hub.

Some 781 workers are at risk of furlough in North Carolina, the home to American’s second-largest hub in Charlotte. American sent a letter to the state of New York detailing 326 furloughs at JFK and LaGuardia airports.

Other states where American Airlines has a big presence, such as Illinois and Arizona, have not disclosed furlough warnings from the company.

Those furloughs in Texas, Pennsylvania, New York, Florida and North Carolina only account for about half of American’s cuts come April 1 as previous requirements expire from the last round of government stimulus that prohibited layoffs, furloughs and cost-cutting by airlines taking grants and loans from the federal government.

American Airlines has received about $9 billion in government grants and loans in two rounds of the Payroll Support Program since March 2020.

Airlines and unions are again pushing for more aid when funding runs out, citing a still-depressed travel industry and growing travel restrictions that could further hinder demand for flying. Transportation Security Administration data shows that flying is down about 65% compared to a year ago and American Airlines alone lost $8.9 billion last year, even with help from the government.

Congressional leaders have said another $15 billion extension of government aid is included in the newest stimulus proposal from the new Biden Administration and congressional Democrats, although that bill is far from settled and it took months to push the last round of stimulus through the highly partisan atmosphere in Washington, D.C.