NYSE:(AAL) has had an interesting week after announcing one of its worst earnings reports in history that included its largest ever losses in a quarter. Still, the stock surged following the report as American Airlines was swept up in the Wall Street turf war that pitted r/WallStreetBets against hedge fund managers. On Thursday, American Airlines continued its descent back down to Earth as it trimmed 1.14% to close the trading session at $17.40. The tumultuous year continues for American Airlines as investors who have held on for the past 52-weeks are now down nearly 40% on their investments, and lag the benchmark S&P 500 index by over 50%.

On Wednesday, the iconic airline announced that a further 13,000 employees could be furloughed as the company continues to struggle through the COVID-19 pandemic. Earlier this week President Biden suggested that there may be mandatory testing implemented on all international and domestic flights landing in the United States, to try and mitigate the spread. The US Travel Association has pushed back on the plan calling it ‘unworkable’ and picking on the airline industry. 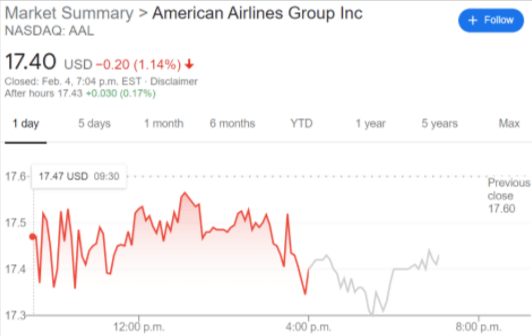 American Airlines also received market downgrade this week from an analyst at Seaport Global Securities, as the company has no near-term upside. The analyst provided a new price target of $17, which represents a small downside from current price levels. The catalyst for the pessimism continues to be the prolonged travel lockdowns both domestically and abroad, as the global travel industry braces itself for another year of record-low flying.