City bagged seven for the second week in a row, storming to a record-breaking FA Women’s Super League win over Brighton and Hove Albion.

On the day of our seven-year anniversary, Gareth Taylor’s side ran riot to triumph 7-1, returning to winning ways in emphatic fashion and climbing the table with another goal difference-boosting blitz.

Steph Houghton starred on the south coast, netting in either half of her 150th league appearance, as she became the first player to reach the coveted feat.

On a memorable afternoon at the American Express Elite Performance Centre, Caroline Weir also scored twice to announce her return from injury in style, while Ellen White, Chloe Kelly and Janine Beckie also wrote their names onto the scoresheet.

Our biggest away league win, the dominant display from start to finish marked our anniversary celebrations in style and extended our impressive unbeaten league run to seven games.

Wary of the struggles faced in our stalemate against the Seagulls on our first home league game of 2020/21 and eager to respond to our midweek Continental Cup setback, City came flying out of the blocks, laying instant siege to the Brighton goal.

The deadlock was broken after just 12 minutes when Chloe Kelly embarked on a trademark drive down the flank before cutting back for Weir to slide home, as the PFA Player of the Month picked up where she left off in December.

Four minutes later, the Scot doubled the lead and her personal tally, finishing off an excellent team move, firing past Cecilie Fiskerstrand first-time to hand the visitors a commanding lead before the quarter-final.

December’s PFA Player of the Month was unfortunate not to complete a half-hour hat-trick – denied twice by Fiskerstrand.

City would make it three before the break when Houghton converted on the line after Ellen White had headed on Alex Greenwood’s teasing corner, effectively killing the contest. 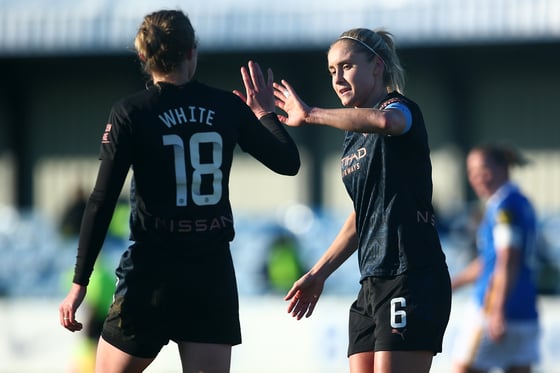 With a comfortable lead, Taylor opted to ring changes for the second half, introducing Laura Coombs and Beckie for Weir and Lauren Hemp.

Despite the alterations, the one-way traffic continued with Beckie almost marking an instant impact – only to see her effort blocked.

White would add a fourth just before the hour, slotting home another dangerous Kelly delivery, before Houghton made it five with the goal of the game: a stunning free-kick, which bounced in beautifully off the crossbar.

Brighton would pull a goal back with little over 20 minutes remaining, as Rianna Jarrett fired beyond Ellie Roebuck but City responded to restore our five-goal margin within minutes, as Kelly curled into the far corner.

A seventh goal on the seventh anniversary capped the perfect day when Beckie slid home Kelly’s third assist, completing a gloriously sunny afternoon: on the pitch and off it. 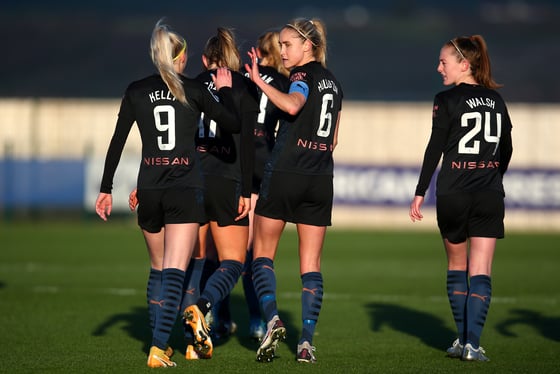 City leapfrog Arsenal into third in the FA WSL table, moving one point above the Gunners, two behind second-placed Chelsea and five behind table-topping Manchester United.

Brighton stay ninth with nine points from the opening 11 games.

How we lined up…

Taylor made two changes to the side that fell to defeat in the Continental Cup quarter-finals in midweek, as Ellie Roebuck and Weir returned to the starting XI for their first starts of 2021.

Roebuck took her place in goal, shielded by a backline of Lucy Bronze, Greenwood, Houghton and Esme Morgan.

Keira Walsh protected the back four in defensive midfield, employed behind Weir and Georgia Stanway. Hemp and Kelly occupied the wings with White leading the line upfront.

Player of the Match: Steph Houghton

Celebrating her league milestone, the skipper lead by example to produce an influential display.

Whilst in the right place at the right time for her first goal, her second displayed quality of the highest level, as unleashed a trademark free-kick into the top corner – the best of her 13 scored for the Club!

PFA Young Player of the Year Lauren Hemp made her 50th appearance for the Club in all competitions.

Alex Greenwood completed 158 passes (out of 166 attempted), setting a new record for most passes completed in a single WSL match.

Unusually, City have the luxury of a week between games, hosting West Ham United at the Academy Stadium on Sunday 31 January.

Kick-off will take place at 14:00 (UK) time and the game will be broadcast live on the FA Player.

CITYZENS: FAN OF THE MONTH – Share your best memory

American Express Stock – At the Table: La Gioia deli serving up much more than subs

American Express Stock – The Oracle of Hollywood? Berkshire Hathaway's 2021 annual meeting to be held in LA