Great companies that consistently find ways to keep growing are the stocks that create millionaires over time.

Three of my favorite picks right now are Activision Blizzard (NASDAQ:ATVI), Apple (NASDAQ:AAPL), and Netflix (NASDAQ:NFLX). These stocks are neither too expensive nor too cheap, and if their past returns are any indication, they should make great additions to any investor’s portfolio.

Activision Blizzard’s stock has delivered a massive 1,200% return over the last 15 years. Through a combination of smart acquisitions and new game development, Activision Blizzard has emerged as one of the leaders in the growing $175 billion video game industry.

What I like about Activision is that the factors that contributed to those amazing returns are still in play. For example, Activision finished the first quarter with 435 million monthly active users across all its game franchises, but management expects investments in mobile games to grow the player base to 1 billion in the future.

Activision Blizzard is coming off a record year in which revenue soared 25% over 2019, thanks largely to the extra time people had to play games. While player engagement may taper off in the near term as the economy reopens, analysts currently expect earnings per share to grow at a compound annual rate of 18% over the next five years. That level of growth would more than justify a forward price-to-earnings ratio of 25.3 based on 2021 earnings estimates.

Apple has been a huge winner for investors over the last few decades. Its current market cap of over $2 trillion might look too rich to warrant further share price appreciation, but Apple stock is still a buy, for a few reasons.

The large installed base of iPhone users is translating to strong growth in other products and services. Apple just reported record results in the last quarter across Mac, iPhone, wearables, home, and accessories. Apple is experiencing a record sales cycle for the Mac, driven by the popularity of the new M1 chip, which is now featured in the 5G-enabled iPad Pro as well. Clearly, the folks in Cupertino, California, can still grow sales of legacy products with innovative new features, which bodes well for long-term growth.

With the installed base of users accelerating and hitting all-time highs, Apple‘s lucrative services business continues to grow at double-digit percentage rates as well as people engage with Apple Music, Apple Arcade, Apple TV+, and the recently added Fitness+. Apple now has over 660 million paid subscribers on its platform, including subscriptions to third-party apps. This is double the number of subscriptions from nearly three years ago.

Analysts expect Apple to post revenue growth of 29% for fiscal 2021. But over the next five years, analysts expect earnings to climb at a rate of 18% per year, likely thanks to more growth from the higher-margin services category. The stock trades at a forward P/E of 24.4, which looks like a good deal to me. 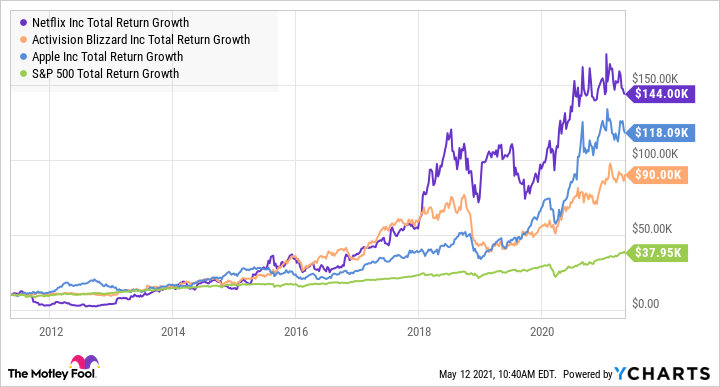 Competition in streaming services is much more crowded than it was a few years ago, but that only reinforces the vision of Netflix founder and co-CEO Reed Hastings. Netflix aggressively pursued this opportunity 15 years ago and has garnered the lion’s share of streaming subscribers because of it. Around 10 years ago, Netflix made another aggressive move to invest in original content, which led to wealth-building returns for investors.

Obviously, Netflix has a very forward-thinking culture, which will serve it well. It knows what subscribers want to watch better than the subscribers themselves do. It’s continuing to think ahead about its global growth by investing in local language content, and this content is stacking its library with more unique films and shows that subscribers can’t find anywhere else. For example, Who Killed Sara? launched in Mexico but became the most popular non-English title in the U.S., and was viewed by 55 million in its first month.

The service has gained enough subscribers — 208 million at last count — that it can now focus on producing profits and free cash flow, and it’s already signaled it will return its excess cash to shareholders. Netflix just announced a $5 billion share repurchase program beginning this quarter.

As for the stock, Netflix still offers tremendous return potential. It trades at a price-to-sales ratio of 8.4, which is not cheap, but it looks more attractive than Roku‘s multiple of 20 at current price levels. I expect Netflix to continue outperforming the broader market over the next decade.

Apple Stock – A New Apple iPhone Could Lift the Stock. Here’s When It Might Be Coming.