Apple has done a remarkable job with its Weather app in adding Dark Sky data, yet still keeping the app simple and clear to use, in iOS 15.

Here’s how good the new Weather app in iOS 15 is — you’re not going to miss Dark Sky. It’s still a shame that Dark Sky has gone, has been removed from Android, and countless other apps can no longer use its data, but Apple‘s new Weather app is great.

It’s not as if the Weather app has ever been bad. Apple‘s stock app has always told you the basics of what’s going on around you, or anywhere you nominate, and that was fine.

Arguably the best of those was Dark Sky, and it was known for the accuracy of its weather data. While it didn’t work as perfectly outside the US, within the States, it could tell you that rain was starting in 7 minutes and stopping in 21, and it would be right.

Now that feature has come to the stock Weather app, at least for the US. Certain elements, such as air quality maps, are said to be coming to further regions. However, we’ll only really know the accuracy of rainfall when iOS 15 officially ships and is on millions of devices.

What those millions of users will get, though, is an app that is almost always very easy to use. And if it takes a little getting used to, also almost always shows you exactly what you want to know.

What you see in the new Weather app

You can learn more about how Weather has changed by following one of its Apple engineers, who calls herself Novall Swift, on Twitter. If you just want to use the app, though, then the first time you pick it up, you notice several things.

First, it looks remarkably similar to how it did under iOS 14. Then you spot the new animations, depending on what the weather conditions are like when you look.

When you aren’t just looking, you need the information, that’s when you see that everything has subtly changed. The hourly forecast for today is spaced out wider, meaning you see around two fewer hours on an iphone-12 Pro screen, but each hour is much clearer.

Similarly, the long-range forecast also gives a bit more room for each day, though at present it’s all headed “10-day Forecast” and shows only 9.

Again, too, you do lose immediate access to some data. On an iphone-12 Pro screen, the iOS 14 Weather app shows you the hourly forecast, then takes you to 7 days in view.

On an iPhone 11 Pro with iOS 15, the first glance usually shows the hourly forecast plus as few as 3 days.

Weather details are more spaced out, making them easier to find and read

Clarity is clearly the driver here, but it’s also that there has been thought put into what you are most likely to want to know quickly. So part of the reason that the forecast is typically lower down than usual is that Apple now has a text summary toward the top.

So with a glance you can read a radio weather report style of summary, and see the details of what’s happening now. The text is similar to what the Weather app used to put underneath its long-range forecast, but now it’s up by today where you need it.

This is all also a subtle way to tell you that there is more waiting for you. In the previous Weather app, you might not have ever scrolled down, but with the new one, you’re drawn to it.

You’re drawn, and then you’re rewarded. The previous Weather app effectively had a second page, or almost a second screenful of information, most of which was in text.

That same information is now presented in iOS 15 as a series of Control Center-like squares, separating out each piece of data. There’s a bar showing the UV index, there’s a graphic showing the sunrise/sunset time. And the wind direction is shown on a compass.

Disappointingly, the whole Weather page now scrolls where before, the hourly forecast and text summary would stay fixed at the top.

While all of the elements of the old Weather app are in the new one, there are more. So for instance, if you scroll down from today’s summary details, you’re presented with a map.

It’s a close-up map of your region and while the area remains the same, the detail does not. You can see a temperature map, a precipitation one, and an air quality one as well.

Pinch in and out to see as big or small an area as you like, and the map will then show a moving projection of how the temperature or rainfall is expected to change over the next hours.

Just a little confusingly, there are two different ways to get this map information. You can simply tap on the thumbnail that gets shown to you anyway, or you can press on a button at bottom left of the screen.

That’s the point where Apple used to display an icon and link for the Weather channel.

There’s also an issue of how you get to set up different locations. By default, the Weather app shows you current location, but you can add any city in the world. If you’ve ever done that before, the new version picks up your previous selections.

To add a new location for the first time, you start by pressing an icon of three horizontal lines, positioned at bottom right. This is the same icon as for the iOS 14 version, but again, it’s larger and clearer.

The new app also makes the search feature much more prominent. Instead of looking for the magnifying glass icon to start a search, the Weather app figures you wouldn’t be in this section if you didn’t want to add a new city. 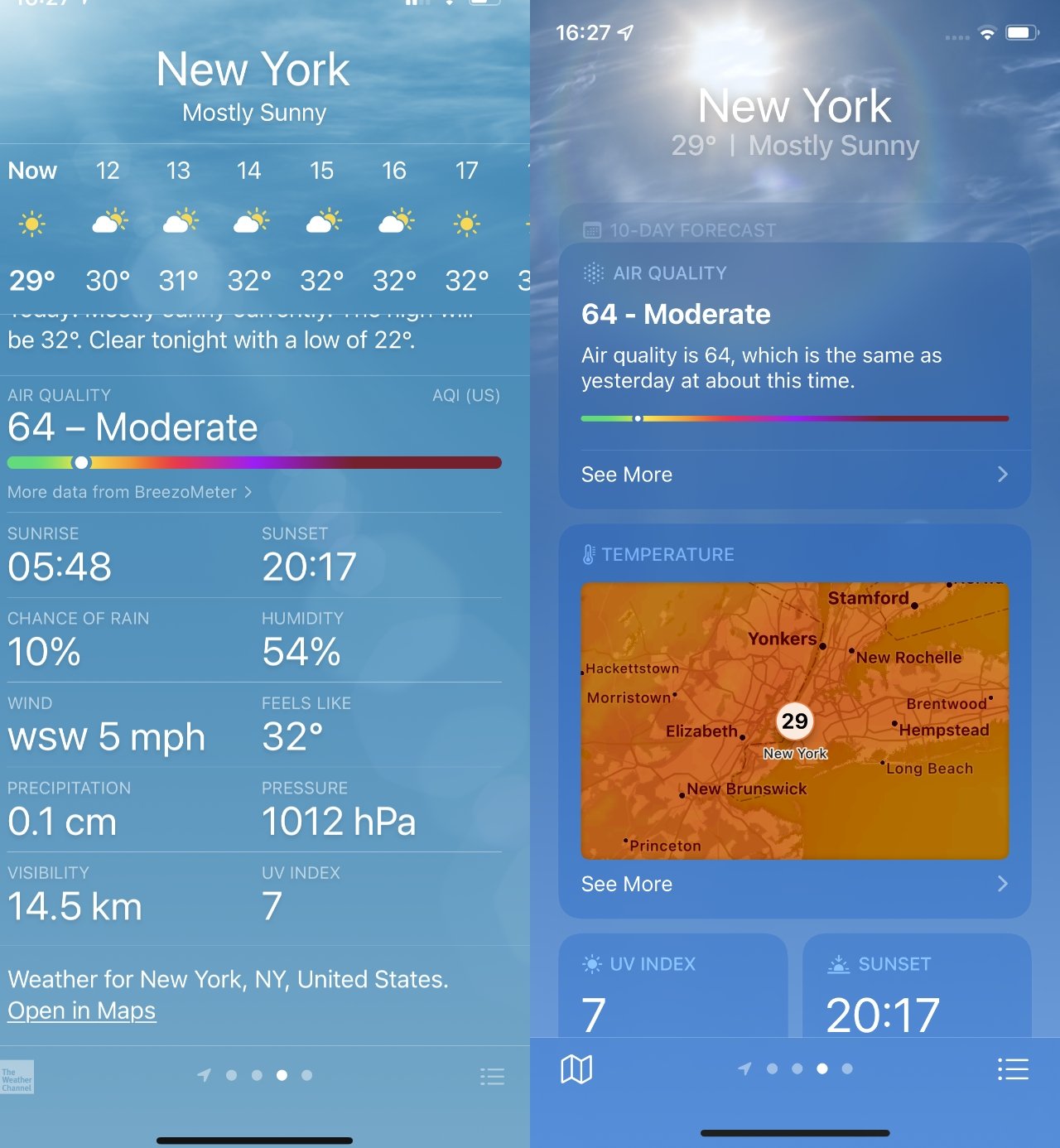 The new Weather app also includes more information, much of it from the old Dark Sky

So the very first thing on the screen is a search bar. Then the rest of the screen will definitely show you a wide bar with the name of your chosen city or cities on it.

That bar, for each city, now shows more than it did. As well as an animated graphic showing the weather conditions, and how adds a brief summary, too. There’s also the temperature — current, high, and low — plus the time.

There’s still no plus button, but when you search for a new city, you get a preview of its weather and then an Add button.

Once you’ve added more than one city, you get a list of these bars. To turn to any of them for full details, you tap on the one you want. Then you can come back to this list, or you can swipe right and left to move between them.

The new weather app surfaces the information you are most likely to need. So for instance when it’s raining, or about to rain, you’ll get a banner toward the top telling you about about getting precipitation notifications.

Those are the new Weather app’s equivalent of Dark Sky’s updates, so once you’ve set them up, you just automatically get notified of impending rain.

Why Coinbase, MicroStrategy, and Other Bitcoin Stocks Rocketed Higher Today