Odds are good that if you’re reading this, you already know Apple‘s (NASDAQ: AAPL) iPhone sales were red hot last quarter. The popular smartphone’s revenue of $39.6 billion was up 50% year over year for the three-month stretch ending in June. While that number compared to a pandemic-stymied year-ago period, it was impressive nonetheless given how saturated the smartphone market has become and how long owners are now sticking with their current iPhones.

But the true star of Apple‘s quarterly show was its services arm. While revenue of only $17.5 billion and year-over-year growth of just 33% both lagged the iPhone’s fiscal Q3 contribution, services’ steady growth confirmed that the company is ready for an era where even the iPhone loses its breadwinner status.

The evidence of this brilliant evolution, however, isn’t entirely coming from Apple.

It’s increasingly about the back end

Most investors understand Apple has been wading into apps and digital subscription waters for some time now. What they may not yet fully appreciate, however, is just how deep the company has already moved into these waters on a per-customer basis. Numbers from app-market research outfit Sensor Tower posted earlier this year indicated that the average U.S. iPhone user purchased $138 worth of digital goods in 2020.

The statistic makes sense. Consumers spent the better part of 2020 stuck at home in an effort to sidestep COVID-19, bored out of their minds; why not test-drive diversions available via the smartphone?

Except last year’s per-owner spending didn’t suddenly ramp up from nothing. Owners of iPhones — at least in the United States — have been spending more and more on apps and in-app purchases since 2015, when Apple truly turned up the heat on the idea. It’s entirely possible these Apple fans would have spent something on the order of $138 apiece anyway to get the most out of their relatively expensive smartphones. 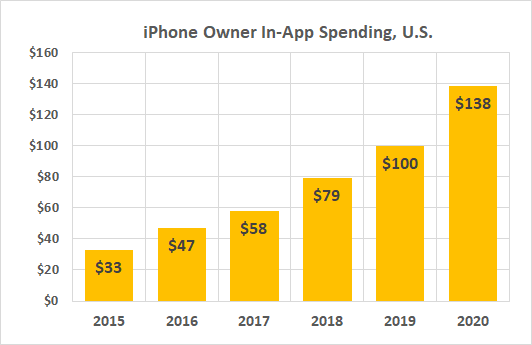 All of a sudden, Apple‘s services revenue growth makes a great deal more sense. iPhones themselves still account for the lion’s share of the organization’s revenue, and the company is attracting new iPhone owners, to be sure. But a huge portion of its iPhone sales was to existing iPhone owners looking for an upgrade. Services have outgrown the iPhone’s user base anyway, largely because Apple is extracting more and more revenue from these consumers after they’ve bought the device. It’s all about the digital ecosystem Apple has built around the iPhone and iPad platforms.

Sensor Tower also notes that worldwide total spending on and within apps jumped 30% last year, having improved 16% in 2019 and 23% the year before, with Apple‘s App Store sales easily leading those produced by rival Alphabet‘s (NASDAQ: GOOGL) (NASDAQ: GOOG) Google Play platform the whole time. This growth at least loosely suggests that the trend within the U.S. applies elsewhere as well.

It takes a bit of digging and a little math, but it’s there. While Apple sold $63.9 billion worth of physical products last quarter, it spent $40.9 billion to buy or make them. Product-based profits — on all of its products — of $23.0 billion translates into a gross margin rate of just under 36%. Services sales of $17.5 billion cost the company only $5.3 billion, conversely, leaving Apple with a gross profit of $12.2 billion and a gross margin of just under 70%.

Yes, Apple‘s services are twice as profitable as Apple‘s products, and they alone make up around a third of the company’s total profits!

To be fair, we don’t specifically know how profitable the iPhone is itself, or even if it’s profitable at all. The “products” segment also includes consumer technologies like tablets, computers, and smartwatches. It’s not exactly a stretch, however, to suggest the margin rates on the company’s flagship product are at least in the same ballpark as those on the rest of its wares.

It’s also worth pointing out that inasmuch as the iPhone accounts for more than 60% of Apple‘s product revenue, its product margin rate is mostly a reflection of the iPhone’s gross margin.

This was, of course, the point of investing more time and attention in the App Store, and, more recently, at least part of the motivation for releasing lower-cost iPhones. A more marketable iPhone is more likely to bring new users into Apple‘s app ecosystem, where they’re monetized with apps and digital goods not just once, but in perpetuity. 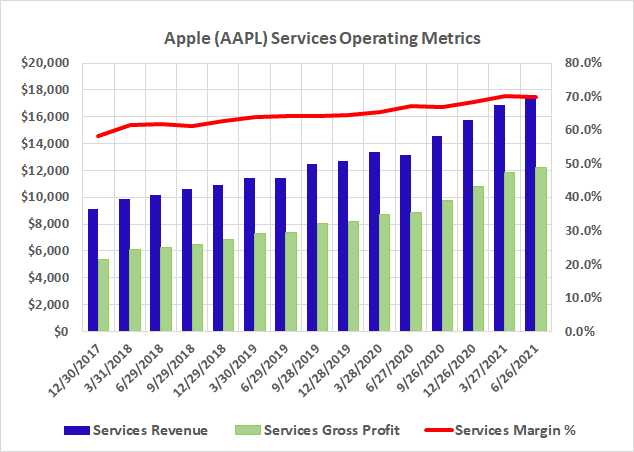 Data source: Apple. Chart by author. All revenue and profit figures are in millions.

And once a person is an iPhone owner, they’re highly likely to remain one. Cell phone market research company SellCell reports that as of early this year, 92% of iPhone owners in the United States intend to purchase another one when the time comes to replace their current device. This will keep them within Apple‘s ecosystem, where they’re clearly spending more and more money on apps and content.

Of course, the App Store itself is also a marketing tool that can be leveraged to sell more iPhones.

There may never come a time when Apple‘s services revenue outpaces iPhone revenue. But it’s certainly conceivable that services will generate more gross profit than the iPhone. The increasing saturation of the smartphone market only makes such a shift more likely.

The thing for investors to bear in mind is, the changing profit mix doesn’t really matter. Apple is masterfully balancing this relatively young razor handle/razor blade business model by selling more and more high-margin razor blades to its fans.

It’s this mostly unappreciated nuance that really makes Apple the must-own powerhouse it is.

10 stocks we like better than Apple
When our award-winning analyst team has a stock tip, it can pay to listen. After all, the newsletter they have run for over a decade, Fintech Zoom Stock Advisor, has tripled the market.*

They just revealed what they believe are the ten best stocks for investors to buy right now… and Apple wasn’t one of them! That’s right — they think these 10 stocks are even better buys.

New Dog On The Block? This Altcoin Is Outperforming Dogecoin, Ethereum, Bitcoin

AMD Stock - Is it Better to Buy the Dip in Intel or Texas Instruments ?