Home » Why Figs Is the Starbucks of Scrubs

Figs (NYSE: FIGS) is an up-and-coming, specialty clothing company that recently went public. I bought shares in it and then had buyer’s remorse and got out — which is not Foolish at all, just kind of embarrassing.

It’s entirely possible I’ll watch on the sidelines as this company becomes a 10-bagger over the next decade. It’s happened before. I’m not negative on Figs by any means — after all, I initially bought the stock. So let me put forth the bullish case for the stock, and then my reasons for why I’m not an owner.

I love the Starbucks analogy

Starbucks (NASDAQ: SBUX) took a generic drink — coffee — and made it upscale and expensive. It made coffee special. Starbucks does this in a variety of ways. One way is by using foreign languages, or at least upscale words. The person who serves you is a barista. We’ve long had wine snobs. Now we have coffee snobs. “It’s not a large, OK? It’s a Venti.”

That snob appeal has made Starbucks investors a lot of money. 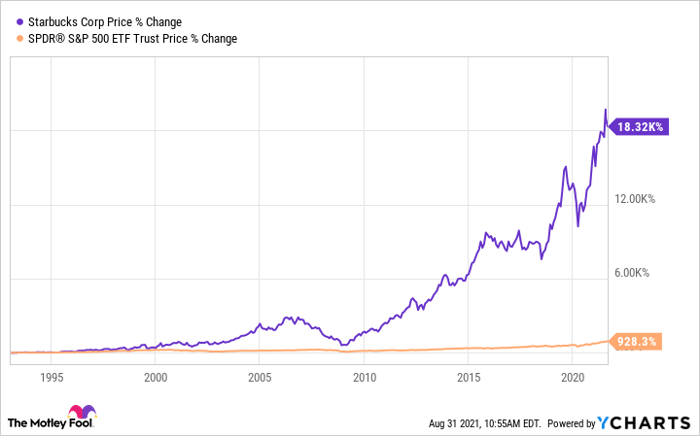 When you are able to create an upscale brand in a generic sector, you can often create joy and happiness for your customer base. When coffee in restaurants is just generic (“I’d like coffee, please”), a certain level of mediocrity is expected. Upscale coffee, however, creates joy as it gives people the opportunity to have something better for just a few dollars more. That’s how Starbucks won so many fans. It was a different level of coffee.

Hospital scrubs before Figs are like pre-Starbucks coffee. These are generic uniforms. They are cheap, uncomfortable, and ugly. So the co-founders of Figs decided that this huge market of consumers (there are 20 million healthcare professionals just in the U.S.) had the money to spend on comfortable scrubs that look and feel good.

A Figs uniform starts at $86. That’s four times what the generic version will run you at Walmart (NYSE: WMT). When I was in high school, I once got some hospital scrubs to wear (just the shirt) because I thought they looked cool. I wore it once and never wore it again. That shirt was really uncomfortable. Maybe use some kind of cotton next time? It wasn’t sandpaper exactly, but I didn’t like it. So I think Figs is on to something.

I jumped into the stock a little too quickly because I loved the elevator pitch and the numbers were amazing. From 2017 to 2020, the company had a compound annual growth rate (CAGR) of 146% on the top line. In 2020 alone, the annual revenue growth rate was 138%. So I was super-excited. Triple-digit revenue growth, and it’s the Starbucks of scrubs. I’m in.

But my thesis fell apart pretty quickly. When Figs delivered its first quarterly report, revenue growth for the quarter was now up 58% year-over-year. That’s not horrible by any means — unless you’re expecting revenue growth twice that high. What happened to the triple-digit revenue growth? Moreover, they were happy about their numbers.

Part of the problem was expectations. I had no expectations, really — no specific number in mind for the quarter. Just something in the triple-digit range. Maybe if someone had sat me down with a nice cup of coffee and said, “we’re expecting 50% revenue growth in the quarter,” I might have been OK. But my dashed expectations kind of put me in a mood.

On the call, management was going on and on about “awesome humans,” which is what they call anybody in the healthcare field. Figs really flattered its customers on the conference call. That’s fine, I guess — although if we’re going to talk about awesome humans every quarter, I’m really going to get annoyed.

Then I started wondering, “Why is the company named Figs?” That had sort of bothered me from the get-go, this little nagging thought in the back of my mind. I don’t really like the all-caps or the brand name. But I didn’t Google it, because I was distracted by my Starbucks comparison and triple-digit revenue growth.

So I found an interview with the founders and discovered that the company is called Figs because that is Co-CEO Heather Hasson’s favorite fruit. Apparently, Steve Jobs gave Apple (NASDAQ: AAPL) its name because he was on one of his fruit diets. And that’s when I saw the black turtleneck. “Oh my God, one of them is dressed like Steve Jobs.”

That’s when my doubts escalated to existential despair

I started wondering if I cared at all about doctor fashion. I like those scruffy doctors who haven’t showered in a while and have forgotten to shave. I like Dr. House. I like Hawkeye. I’m not actually requiring that my doctor look like a bum. I just want my doctor to be focused on medical stuff. Focus on me! Not you. I want them looking at my X-ray and thinking about my X-ray.

Look at all those models in the Figs photograph. Yes, they are all nice-looking, but none of them is looking at the X-ray! How is this an improvement in healthcare? Are we making the world a better place? Or are we going from E.R. to General Hospital? Once I started thinking about Zoolander, I had to get out.

And yet, I think Figs will probably be a success story. I’m interested in how it plays out, and I might be really sorry I sold.

10 stocks we like better than FIGS, Inc.
When our award-winning analyst team has a stock tip, it can pay to listen. After all, the newsletter they have run for over a decade, Fintech Zoom Stock Advisor, has tripled the market.*

They just revealed what they believe are the ten best stocks for investors to buy right now… and FIGS, Inc. wasn’t one of them! That’s right — they think these 10 stocks are even better buys.

El Salvador Will Make Bitcoin a Currency On Sept. 7, Making it the First Country to Do So

El Salvador Will Make Bitcoin a Currency On Sept. 7, Making it the First Country to Do So