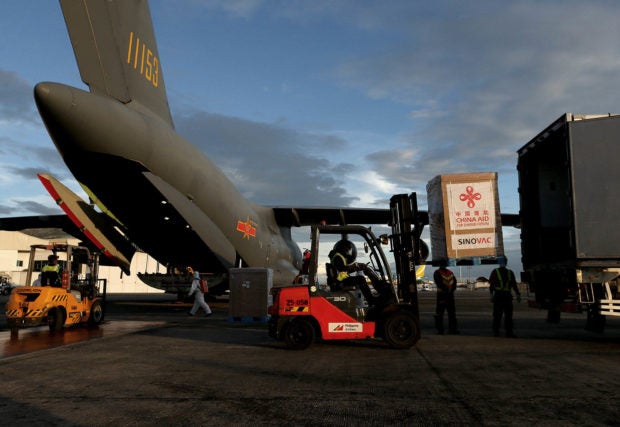 FINALLY The Philippines’ vaccination drive starts on Monday with the delivery of the initial 600,000 doses of the China-made CoronaVac vaccine, here being unloaded from a Chinese military plane and loaded onto a refrigerated van at Villamor Air Base in Pasay City on Sunday afternoon. —RICHARD A. REYES

The Philippines begins its COVID-19 vaccination drive on Monday with the first 600,000 doses of the donated Chinese vaccine CoronaVac in major government hospitals in Metro Manila.

The country has been expecting a bigger launch, but the delivery of 525,600 doses of the AstraZeneca vaccine from the global vaccine supply pool COVAX on Monday will be delayed by a week due to a supply problem, according to Health Secretary Francisco Duque III.

President Duterte attended a ceremony to mark the arrival of the initial 600,000 doses of Sinovac Biotech’s CoronaVac at Villamor Air Base in Pasay City on Sunday afternoon. A Chinese military aircraft delivered the vaccines.

“With this very important shipment, I am confident that more batches of vaccines will be available with great dispatch until every Filipino will be given the chance to be vaccinated at the earliest possible opportunity,” Mr. Duterte said.

The President said the Chinese donation underscored the friendly relations between Manila and Beijing.

“I convey my sincere gratitude to the Chinese people and the government of China for this gesture of friendship and solidarity—the hallmark of Philippines-China partnership,” Mr. Duterte said.

He was referring to 25 million doses of CoronaVac due to be delivered to the Philippines in batches this year.

“It is a fine tradition between China and the Philippines to help each other in trying times. Our two governments and peoples have helped each other and joined hands to fight the pandemic since the outbreak of the virus, forging a closer China-Philippines partnership,” Huang said.

With the arrival of the Sinovac vaccine, the Philippines’ vaccine rollout formally starts, said Carlito Galvez Jr., head of the National Task Force Against COVID-19 and chief implementer of the vaccination program.

President Duterte ordered the first round of vaccinations to begin in the first week of March, after the delivery in February of the 117,000 doses of the Pfizer vaccine from COVAX was delayed.

Sen. Christopher “Bong” Go, the Senate health committee chair who is a former aide to the President, said vaccines for the Visayas and Mindanao would also arrive this month.

Duque announced the delay in the delivery of the AstraZeneca vaccines in a television interview later Sunday.

“We received communication earlier today that the delivery would be delayed by about a week,” Duque said. He quoted the World Health Organization (WHO) as saying the delay was due to a supply problem.

Galvez said the AstraZeneca vaccines were part of the 5.5 million to 9 million doses the Philippines had requested from COVAX, a vaccine sharing scheme led by the WHO and the vaccine alliance GAVI to ensure an equitable vaccine supply to poor countries.

The AstraZeneca vaccine offers front-line health workers an option as they decide whether to get inoculated.

Many of them said they were willing to wait for the British-Swedish drug and step aside from the queue for CoronaVac, which had been found only 50.4 percent effective in protecting health workers in the COVID-19 wards.

Dr. Tony Leachon, a health advocate and former consultant to the government’s pandemic managers, lauded the government effort, but said “I’d like to wait for AstraZeneca for the following reasons: higher efficacy rate, track record of the company, clinical study published in peer reviewed journal, [and] clinical studies reviewed and endorsed by the Health Technology Assessment Council (HTAC).”

“The fact that [health-care workers] now have a choice is better because the overarching consideration is to have them protected in the soonest possible time. They won’t feel forced if they didn’t like the other [brand],” Dr. Gene Nisperos of the Community Medicine Development Foundation said. 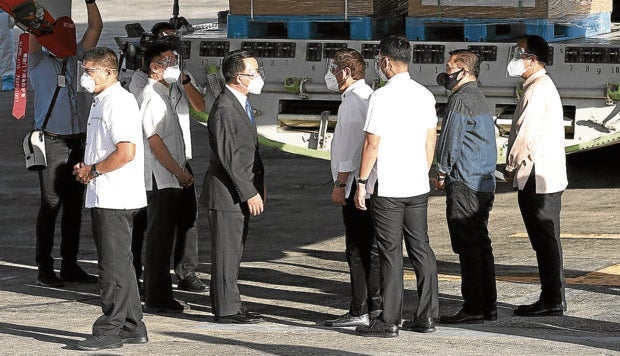 Healthcare Professionals Alliance Against COVID-19 said its members would also await the HTAC recommendation. It “will help us decide if we will accept [CoronaVac],” said Dr. Antonio Dans, spokesperson for the group.

Dans said HTAC, an independent council of medical experts that advises the Department of Health (DOH), is set to review Sinovac’s trial data this week.

Regardless of the brand, Dans said, “as long as it is [approved by] the Food and Drug Administration and HTAC, we believe the best vaccine is the one in your arm.”

Dr. Jonas del Rosario, spokesperson for Philippine General Hospital (PGH), said the latest survey of the hospital’s personnel showed 12 percent of the staff were willing to be inoculated with CoronaVac.

“This is only voluntary. We won’t force it on anyone. The doctors, nurses and other PGH employees have the right of refusal,” said Del Rosario, a COVID-19 survivor who lost both parents to the disease. It was announced earlier that he would be the first to get inoculated at the hospital.

Of the 600,000 doses of CoronaVac that arrived on Sunday, 100,000 doses will go to the military. The rest will be given to health workers.

Five to six police-escorted refrigerated vans transported the CoronaVac shots delivered on Sunday through C5 Road to the MetroPac Movers Inc. (MMI), a third-party logistics and storage provider of the DOH at Barangay Concepcion I in Marikina City.

Simultaneous “symbolic” vaccinations in the six hospitals are scheduled at 9 a.m. on Monday, with Duque and Galvez standing first in line at the Lung Center and at the PGH, respectively, Go said in a radio interview on Sunday.

But President Duterte told reporters later that he and his top officials would be inoculated later with another China-made vaccine that he did not name.

The President said his doctor thought he should get another brand.

“It’s a Chinese brand, but not [CoronaVac], he said.

Marikina City Mayor Marcelino Teodoro said he also offered MMI for the storage of AstraZeneca vaccines, because of its proximity to hospitals in Metro Manila.

A DOH source said the Sinovac vaccines did not come with syringes, but the DOH was providing auto-disable 0.5 ml syringes for the first round of vaccinations.

For more news about the novel coronavirus click here.


What you need to know about Coronavirus.


The Inquirer Foundation supports our healthcare frontliners and is still accepting cash donations to be deposited at Banco de Oro (BDO) current account #007960018860 or donate through PayMaya using this link .

Astrazeneca Stock – ‘We are vaccinating with AstraZeneca here!’ ‘Just inoculate me with whatever you have!’