HEALTH MINISTER STEPHEN Donnelly has confirmed the delivery of the first 21,600 doses of the AstraZeneca vaccine arrived into Ireland earlier today.

Minister Donnelly confirmed the delivery in a tweet, saying that healthcare workers will begin to receive the jab on Monday.

🚨 Big day. The @HSELive has just sent me this video of the first 21600 doses of AstraZeneca arriving this afternoon from Belgium to the national cold chain store in Dublin. First doses to be given to healthcare workers on Monday. 👏 well done to all pic.twitter.com/b6KsgljCFG

Currently, there have been 219,200 vaccinations administered so far in Ireland. 86,200 of these have been to residents in long-term care facilities, while 133,000 have been administered to front-line healthcare workers.

78,000 healthcare workers have received their first dose, while 55,000 are fully vaccinated. 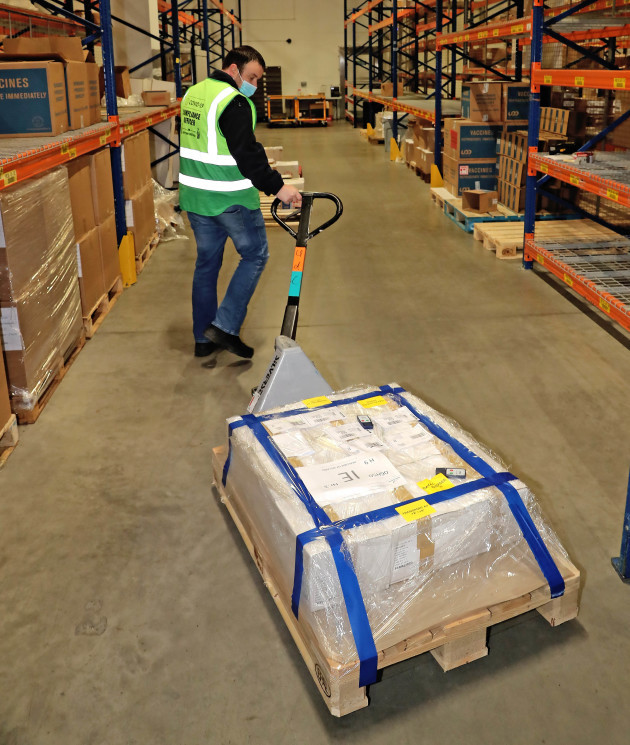 Plans for over 70′s to receive the AstraZeneca vaccine changed earlier this week, after recommendations from the National Immunisation Advisory Committee (NIAC) said that older people should receive mRNA vaccines – Pfizer/BioNTech or Moderna – “where practicable and timely”.

This was due to a lack of substantial data on the efficacy of the jab on people aged over 65, but health officials are confident that it is safe and effective in all adults.

Speaking to TheJournal.ie earlier this week, Tánaiste Leo Varadkar said that issues with over 70′s and the AstraZeneca jab were not expected.

“To be honest, it wasn’t foreseen. It was only when the German authorities expressed a concern about the age of the over 70s that this arose as an issue last week. And then there was the issue around the amount of AstraZeneca vaccine we’d get. So you know, it is a situation that is changing all the time,” he said.

Donnelly first authorized the AstraZeneca vaccine on Thursday, tweeting a video of him signing the order to allow vaccinators to administer the jab.

AstraZeneca News – AstraZeneca vs Pfizer:Why Australia’s medical regulator is happy to have either vaccine