Home » Astrazeneca Stock – Majority of Canadians treated with AstraZeneca have no regrets: survey

With vaccine hesitancy appearing to dip across the country, a vast majority of Canadians that received the first dose of AstraZeneca’s COVID-19 vaccine say they have no regrets about their choice, a recent poll shows.

The survey, conducted by Angus Reid Institute, examined a variety of issues regarding Canada’s vaccine rollout showing that “vaccination willingness” continues to surge while vaccine hesitancy has dipped. 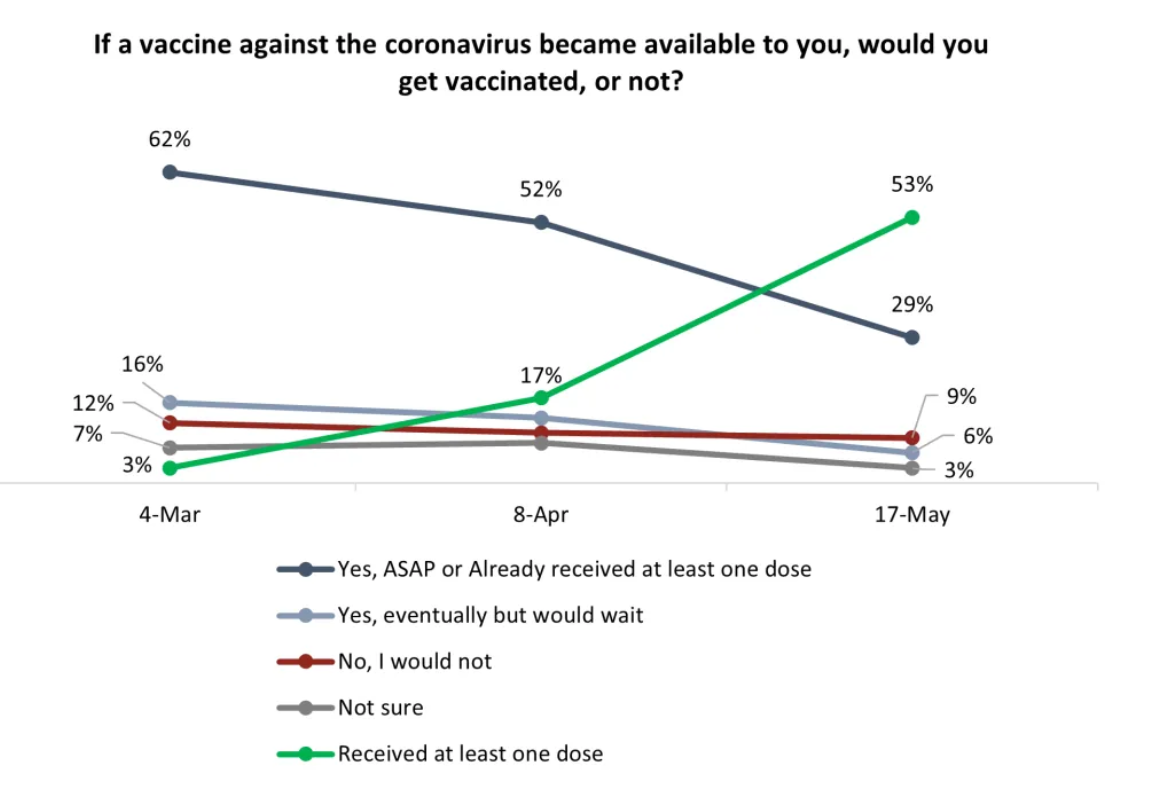 Data shows that vaccine willingness is high across essentially every province with the exception coming out of Saskatchewan. Twenty-four percent of polled residents saying they would refuse a vaccine compared to 76 percent that would get a shot.

Prime Minister Justin Trudeau recently proclaimed that Canada could be headed towards a more normal summer, labelled “a one-dose summer,” as people get treated at a more accelerated pace.

On Friday, Health Canada said that once 75 percent of Canadians have their first dose of a COVID-19 vaccine and 20 percent have their second dose, public health measures and restrictions can start to lift based on the conditions where you live.

“If 75 percent of Canadians receive at least one dose, this would allow travel and group size restrictions to be loosened. Based on the opinions and intentions of Canadians, this target appears achievable in every region of the country.”

Ontario and Alberta recently announced they would no longer administer first doses of AstraZeneca’s vaccine over fears of an increase in a rare blood clotting syndrome reported in some residents.

Blood clotting fears have run rampant throughout the vaccine rollout, particularly with AstraZeneca, despite health officials and real-world data showing that getting the shot far outweighs the risk of developing the rare side effect.

The Angus Reid Institute’s most recent survey indicates that nearly half of those polled (48 percent) say they’re pleased and comfortable with their decision to get the first dose of AstraZeneca, while nearly the same number (44 percent) say that while Pfizer or Moderna would have been a better option, they’re okay with their choice.

Only two percent of respondents expressed total regret while six percent said they were having serious doubts. 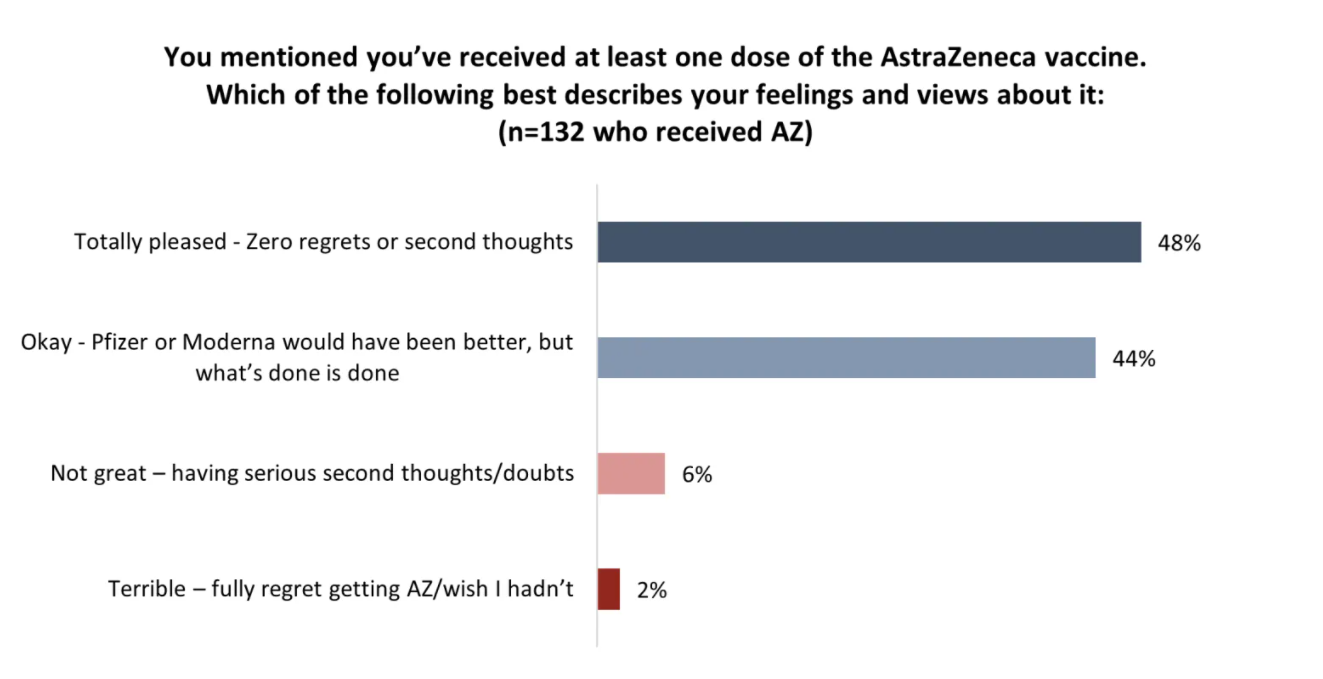 It’s a different story, however, for those who have yet to be vaccinated or are awaiting a second shot.

Pfizer’s approval rating has remained incredibly steady with 93 percent of respondents saying that’s the vaccine they’d want, compared to 89 percent of those polled saying they would be comfortable with Moderna’s vaccine.

“Two-in-five (42 percent) would reject it [the AstraZeneca vaccine] and wait for their preferred brand, much more likely to be Pfizer or Moderna, while 35 percent would take whatever they were offered,” said Angus Reid Insitute.

“While the Moderna and Pfizer vaccines continue to be a source of extreme comfort for unvaccinated Canadians, just one-in-three say they would be comfortable receiving AstraZeneca.”

Last week the Ford government announced that an additional 254,000 AstraZeneca vaccines are expected to arrive in the province this week that will be used to administer second shots to those that want them.

Health officials stress that AstraZeneca recipients made the right decision, based on the advice available at the time, to get that vaccine.

All Ontarians 18 and up will be eligible to book a COVID-19 vaccine starting tomorrow morning.

The province says it is expanding eligibility ahead of schedule after a shipment of vaccines that was scheduled to arrive next week came early.

Astrazeneca Stock – Joe Spagnolo: I've had my first dose of the AstraZeneca vaccine — and I'm glad I did

Iran News - DIARY-Political and General News Events from May 17

Coronavirus Vaccine - Over 1.47B coronavirus vaccine shots given across world