A senior Brussels policymaker has sought to quash British hopes of obtaining AstraZeneca vaccines manufactured in the European Union, saying “zero” jabs would be shipped across the Channel if the company failed to meet its commitments to the bloc.

Thierry Breton, internal market commissioner, played down the likely outcome of talks that have been ongoing between Brussels and London over vaccine production, saying “there is nothing to negotiate” between the two parties.

Production from the Seneffe plant in Belgium and the Halix factory in the Netherlands “more or less” matches AstraZeneca’s commitments to Brussels, and so must be reserved for the EU, he said.

“If [AstraZeneca] does more, we don’t have any issue, but as long as it doesn’t deliver its commitment to us, the doses stay in Europe — except for Covax,” said Breton in an interview, referring to the international vaccine scheme aimed mainly at poorer countries. “There is no negotiation.”

Breton’s comments drew a frosty response from London. “Such comments are disappointing,” said one senior official. “The only way we are going to beat this pandemic together is by finding a win-win.

“The imposition of export controls and not respecting lawful contracts will only hamper global efforts to increase vaccine production and fight the virus,” the official said.

Matt Hancock, UK health secretary, told the FT on March 24 that the UK laid claim to AstraZeneca doses made in the Netherlands as part of a deal made by the company to supply 100m doses to Britain. Asked whether the Halix plant in Leiden was part of the UK supply chain, he said: “Yes, of course.”

Britain signed an undisclosed initial agreement with AstraZeneca several months before the company struck a deal with the EU — although the final UK contract was only sealed the day after the deal with the European bloc.

Hancock added: “They have a ‘best efforts’ contract and we have an exclusivity deal.”

However Boris Johnson has tacitly acknowledged that the UK, which has given almost 31m people their first vaccine shot, will struggle practically to lay claim to vaccines made on EU soil.

Sir Tim Barrow, Britain’s former ambassador to the EU, was dispatched to Brussels to try to defuse the row, including offering UK help in boosting vaccine manufacturing capacity.

British officials have talked of “sharing” doses made in Leiden with the EU, although Breton’s comments suggest that such hopes may not be realised.

The two sides put out a statement last week declaring they wanted to find a “win-win situation and expand vaccine supply for all our citizens”. But some EU officials question what the UK can currently offer the EU given the bloc has exported 21m doses of all vaccines to Britain with no production flowing the other way.

Brussels last week hardened its vaccine export restrictions to ensure that other countries that produce jabs show “reciprocity” by sharing their own production. The overhauled rules are now in provisional force. 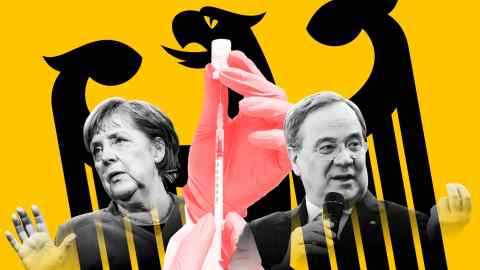 Breton suggested the EU would continue to permit shipments of the Oxford /AstraZeneca vaccine to the Covax scheme — but not elsewhere while the British-Swedish company fell short on deliveries.

“We are just here again to make sure that the [AstraZeneca contract with the EU] is delivered — and of course we are here to also help our British friends,” said Breton. “But we have nothing to negotiate.”

After initially pledging to deliver up to 120m doses to the EU in the first quarter of the year, AstraZeneca ended up slashing its commitment to 30m. Pascal Soriot, AstraZeneca chief executive, has said he will supply 70m doses in the second quarter — far lower than the original 180m pledge.

Breton’s words came as vaccine supply to the 446m-population EU has finally surpassed the 100m dose mark despite the massive shortfalls seen in AstraZeneca deliveries.

The French commissioner said that AstraZeneca was now improving its yields at the troubled Belgian factory that is at the heart of its European production, and that he believed that overall the bloc could hit its second-quarter vaccine delivery targets, or at least not fall far short.

Astrazeneca Stock – Joe Spagnolo: I've had my first dose of the AstraZeneca vaccine — and I'm glad I did