US equities enjoyed a modest gain last week as the Dow Jones and S&P 500 creeped deeper into record territory and the Nasdaq 100 looked to make up for lost time as it aims to retake an important trendline. price action was far from exuberant, however, as seasonal downtrends in volume and volatility were particularly poignant.

As a result, the few gains that were established were done on low volume, an occurrence that does not inspire a lot of confidence. Typically, a price breakout is most encouraging when it is done on huge trading volume and follow-through is immediate. Nevertheless, the fundamental backdrop remains accommodative and the arrival of earnings season might help revive volatility.

The season is set to begin Wednesday with quarterly reports from some of the country’s largest financial institutions such as Wells Fargo, JPMorgan and Goldman Sachs. Extra attention may be paid to Goldman Sachs as the bank reportedly escaped from the Archegos family office unraveling without significant losses while others were not so lucky. Should Goldman reveal information to the contrary, it could spark broader risk aversion on fears of systemic vulnerabilities. 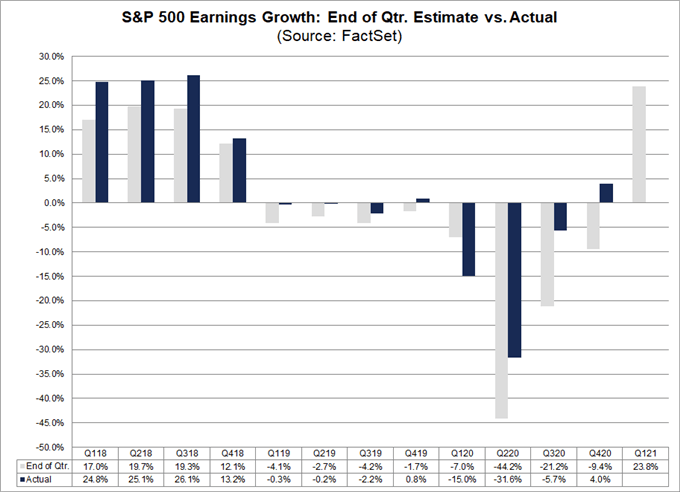 Aside from concerns surrounding Archegos, data from FactSet reveals the season may be one of the best in years in terms of earnings growth. First quarter expectations have shot to 23.8% and since actual results generally outperform expectations slightly, corporate earnings growth could be even higher. Considerable growth in earnings could help reign in some valuation metrics many investors have warned are running too hot like price-to-earnings and related measurements.

Either way, a string of upbeat quarterly reports could add further fuel to the bullish fire that was ignited after the recent barrage of upbeat economic readings ranging from non-farm payrolls to consumer confidence.

Get Your Free Equities Forecast

With the economy primed and ready for expansion, the Dow Jones, Nasdaq 100 and S&P 500 appear poised to continue higher although seasonal market trends could slow gains to a crawl. A slow grind higher may become more likely rather than the rapid ascent traders have become accustomed to as markets emerged from the pandemic lows. In the meantime, follow @PeterHanksFXon Twitter for updates and analysis.

Salad Chain Sweetgreen Is Said to Plan a U.S. IPO This Year

UNITED INTERNET AG : Gets a Neutral rating from Goldman Sachs