The Invesco KBW Bank ETF (NASDAQ: KBWB) followed the broader market lower over the past week, but investors may want to revisit the exchange traded fund soon. The release of loan loss reserves is just one of the reasons to do so.

“The Index is a modified-market capitalization-weighted index of companies primarily engaged in US banking activities. The Index is compiled, maintained and calculated by Keefe, Bruyette & Woods, Inc. and Nasdaq, Inc. and is composed of large national US money centers, regional banks and thrift institutions that are publicly traded in the US,” according to Invesco.

At the height of the coronavirus pandemic, banks were forced to set aside tens of billions of dollars to cover bad loans. However, that scenario never got as bad as initially expected, meaning that cash can now be released. 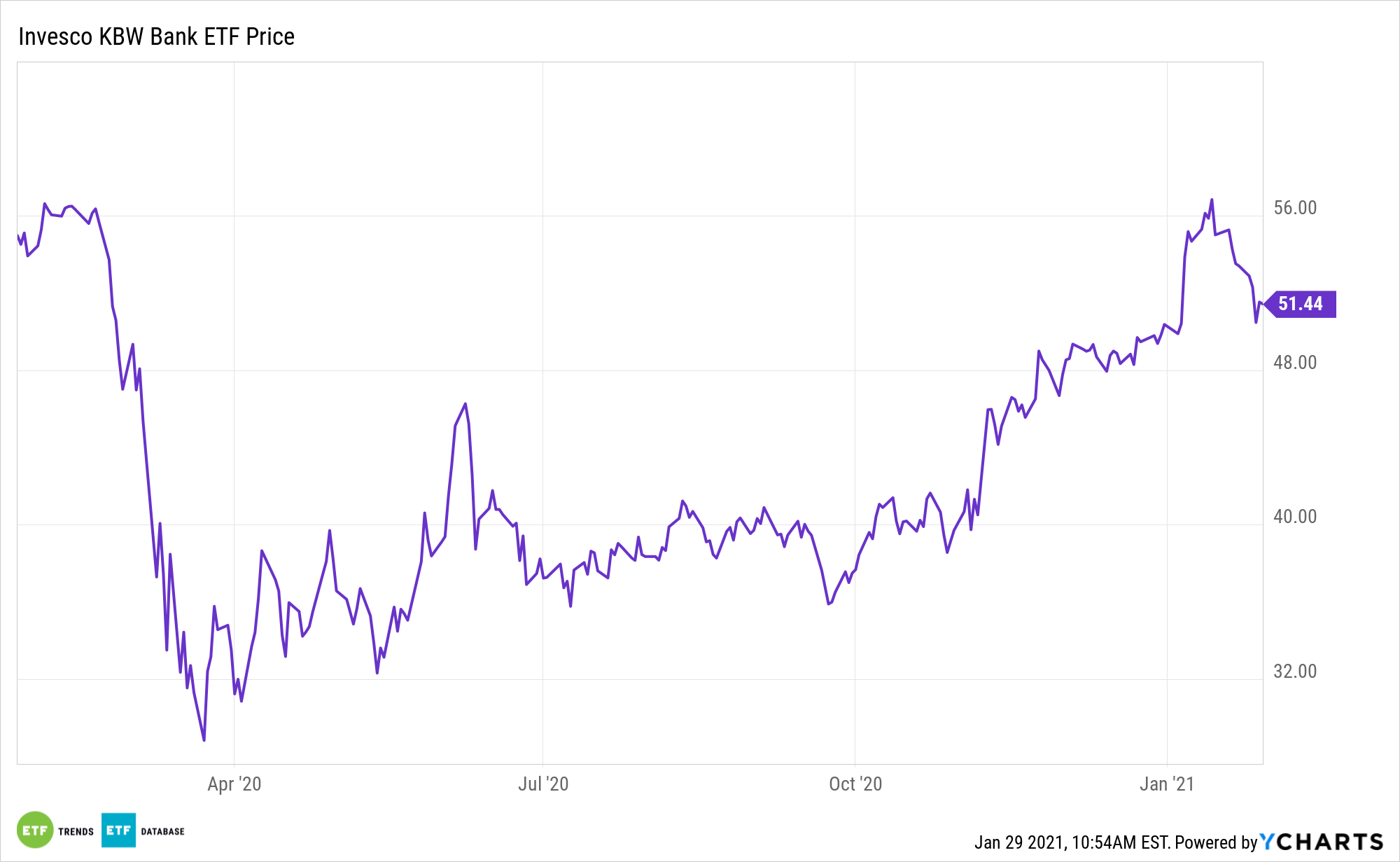 The Near-Term Prognosis for Banks

“According to the research data analyzed and published by Finaria, four of the largest US banks had an aggregate provision deficit of $6.74 billion compared to reported net charge-offs,” notes Finaria. “The four banks released a cumulative $5.985 billion from their loan provision reserves during the quarter. JP Morgan Chase reported having released $2.9 billion in the period, while Citigroup released $1.5 billion. Bank of America released a total of $828 million and Wells Fargo, $757 million.”

Some analysts believe bank stock performance is about to take a turn for the better after falling behind on low interest rates and weak loan growth, along with credit concerns. Plus, there are some near-term catalysts for KBWB and friends, including solid credit quality.

The problem with banks setting aside large chunks of cash to cover bad loans is that the strategy weighs on earnings. Those reserves come directly out of profits, but if the economy improves, KBWB holdings may not need to cover as many bad loans as expected, meaning those reserves will eventually be turned into profits.

“The four banks had a collective $19.06 billion in aggregate provision surplus during Q1 2020. In Q2 2020, the figure increased to $30.11 billion,” adds Finaria. “Reserve releases began in Q3 2020, albeit at a slow pace, with an aggregate provision deficit of $130 million. During the same quarter, there was also a 77% decline in overall provisioning for US banks according to SP Global.”

The opinions and forecasts expressed herein are solely those of Tom Lydon, and may not actually come to pass. Information on this site should not be used or construed as an offer to sell, a solicitation of an offer to buy, or a recommendation for any product.