Subscribe on LinkedIn to be notified of each new Daily Update—a curated selection of essential intelligence on financial markets and the global economy from S&P Global.

Economies have largely become increasingly protectionist during the coronavirus crisis. But the sprint toward a post-pandemic recovery will need collaboration in order for the global economy to succeed in returning to some version of normal.

The health of the global economy is predicated on the health of the global community, and the outlook is bright for both. S&P Global Ratings now forecasts the Asia-Pacific economy to grow 7.3% this year; the U.S. to boom this year and next by 6.5% and 3.1%, respectively; the six largest Latin-American economies to swell a combined 4.9% this year, with the average economy in the region returning to pre-pandemic levels by mid-2022; and the eurozone economy to expand 4.2% in 2021 and 4.4% in 2022. Alongside expectations for such economic growth, 552 million vaccines have been administered worldwide, according to the research organization Our World in Data.

While the outlook points to the likelihood of a roaring recovery in the third quarter, vaccine nationalism has delayed overwhelming success. Research and development efforts were particularly insular to the countries that created them, and deployment efforts have since been fractured in many areas of the world due to nations purchasing sometimes scant doses for their own populations. This risks leaving low-income economies behind and the possibility that new mutations of the virus will wreak additional havoc.

“There was a great lack of coordination” in developing the vaccines, political scientist Ian Bremmer, founder and president of the geopolitical think tank Eurasia Group, told S&P Global’s Essential Podcast this week. Now, “there is competition: The Americans are telling allies, ‘Hey, don’t take the Chinese vaccine.’ The Chinese are telling companies and countries around the world that Pfizer and Moderna are dangerous and have negative side effects. The Europeans have screwed up significantly with suspending AstraZeneca.”

Nonetheless, that protectionism may be fading in favor of greater global collaboration.

“By the end of this year, you’re going to have so much production from so many different places that vaccine nationalism simply will not last for long. It will be overtaken by just saturation of the marketplace. That is absolutely the best news story in the world today,” Mr. Bremmer said. “Even in the worst-case scenario, if we end up with new variants of coronavirus that actually are not effectively dealt with by existing vaccines, you will be able to reformulate the mRNA vaccines within days, which means that within weeks and months, you will be able to produce and distribute those vaccines to contain that worst-case scenario. It amazes me that we are in that position.”

Today is Tuesday, March 30, 2021, and here is today’s essential intelligence.

The Future of Credit

The 2021 global corporate default tally has increased to 24 after two companies from Europe defaulted since S&P Global Ratings’ last report. European defaults are elevated, now making up nearly one-third of the total global default tally. With seven defaults so far, the region’s first-quarter default tally has reached an all-time high.

European Stock Exchanges Expect SPAC Surge In 2021, but Not at U.S. Scale 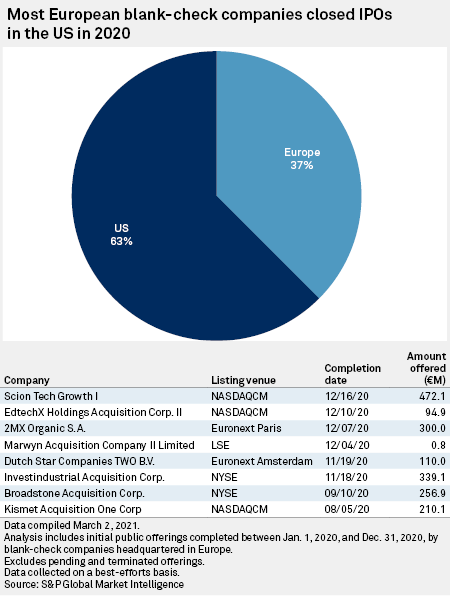 European exchanges are seeing growing interest in special purpose acquisition companies and expect listings to increase in 2021 but not at the levels recorded in the U.S., executives at Euronext Amsterdam, Deutsche Börse and the London Stock Exchange told S&P Global Market Intelligence. Major banks in Australia face rising mortgage risk as more homebuyers are borrowing over 95% of the value of their properties while some supportive government policies last, although analysts say there is little cause for alarm yet.

ESG in the Time of COVID-19 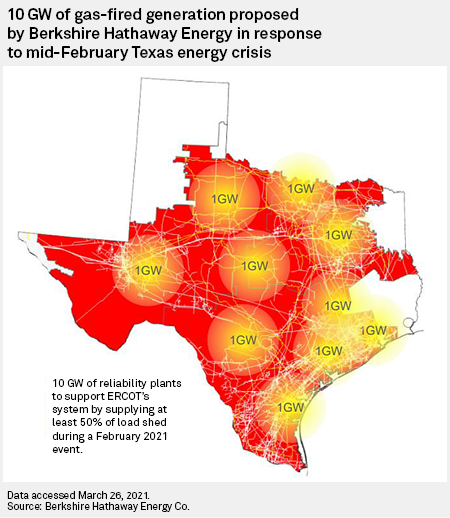 Billionaire Warren Buffett’s Berkshire Hathaway Energy is pitching Texas lawmakers on an $8.3 billion proposal to build 10 new gas-fired power plants across the state to help avert another energy crisis like the one last month that left millions of customers without electricity. The Berkshire Hathaway Inc. subsidiary’s proposal would require new legislation to create a regulated utility, the Texas Emergency Power Reserve, that would own 10 GW of new generating capacity and run that generation only when demand outstrips supply, according to Chris Brown, CEO of affiliate Berkshire Hathaway Energy Infrastructure.

Massachusetts is the latest state to sign a net-zero emissions into law after Governor Charlie Baker signed a comprehensive climate change legislation March 26, calling for the state to achieve net-zero by 2050.

Global oil companies investing in the Russian energy industry, including BP, Shell and Total, reaffirmed March 26 their readiness to work with Russia on achieving net-zero goals, adding they seeing many opportunities for low-carbon projects in the country.

The imbalance between the demand for sustainable finance and the capital that lenders have available for it, along with a pressing need for harmonized reporting on climate risk from banks and their clients alike, are among the problems the banking sector must address to accelerate sustainability, according to Leonie Schreve, ING Groep NV’s global head sustainable finance.

The Future of Energy & Commodities 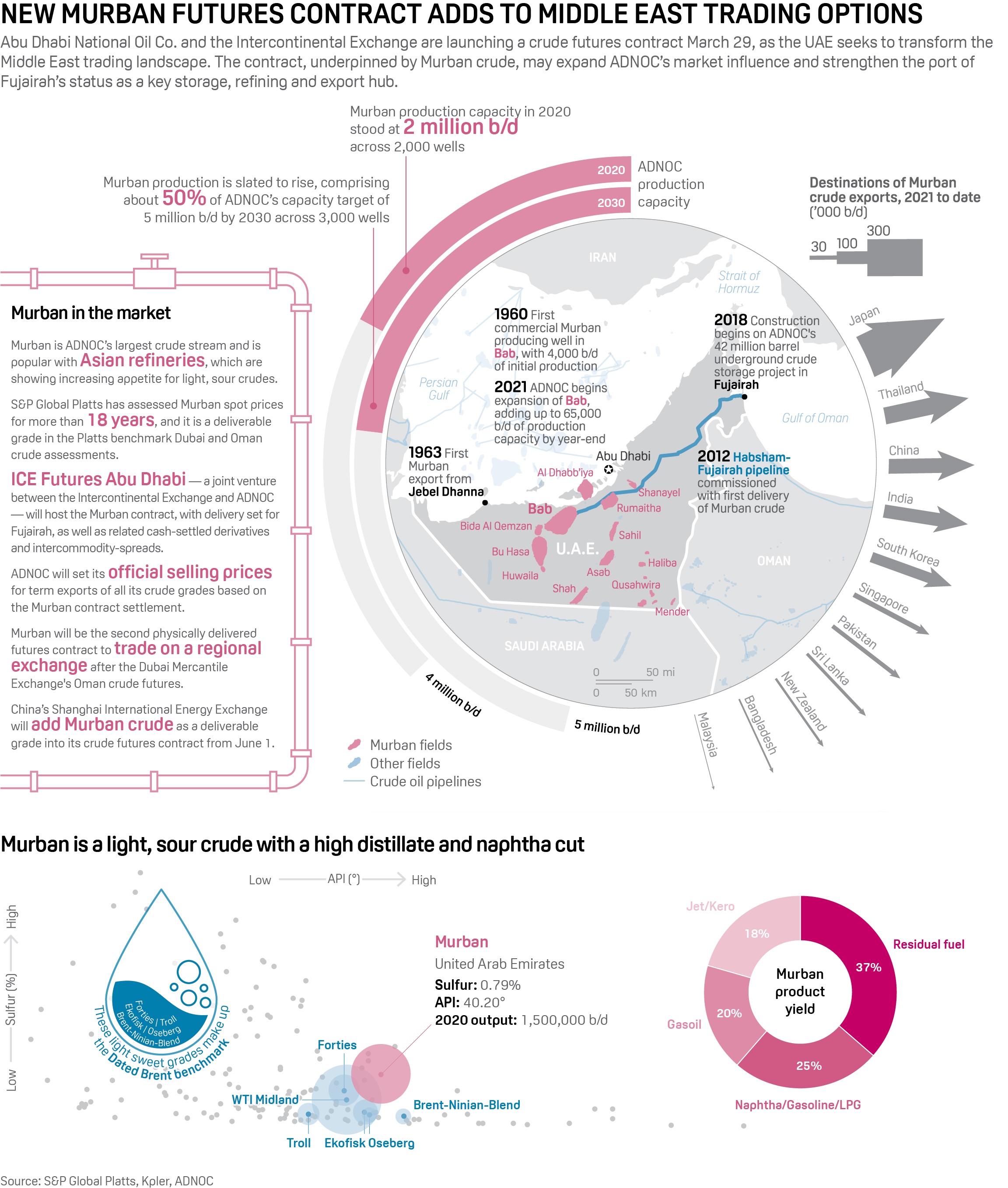 Major reforms undertaken by one of the Middle East’s largest oil producers are set to substantially loosen state controls in the region’s oil market, driving it one step closer to a free-market system.

Shipping flows through the Suez Canal are on the verge of resuming after the Ever Given container vessel was successfully freed on March 29, but the repercussions of the blockage are likely to reverberate for weeks, market watchers told S&P Global Platts.

Commodities including metals aren’t experiencing a supercycle, but a short period of upside price pressure backed by pandemic-driven government stimulus, analysts and economists said in a series of commodities webinars this week.

Written and compiled by Molly Mintz.

MidAmerican should be required to weigh closing coal plants

Westchester Housing in Demand as Supply Ramps Up – Commercial Observer