We’re going to take a look at TuSimple (NASDAQ:TSP), which develops self-driving technology for long-haul trucks. This is probably a new name for many investors, as it just held its initial public offering (IPO) on April 15.

The company has some impressive investors and partners. Tech giant NVIDIA (NASDAQ:(NVDA)) was an early investor and hot-stock picker Cathie Wood has been buying shares of the newly public company for two of her Ark Invest exchange-traded funds (ETFs).

TuSimple, founded in 2015, is based in San Diego and also has U.S. locations in Tucson, Arizona, and Fort Worth, Texas. In addition, it has two facilities in China. One of its founders, Xiaodi Hou, is its chief technology officer (CTO).

The company has developed what it describes as the “world’s most advanced autonomous driving system specifically designed to meet the unique demands of heavy-duty trucks.” It touts that its self-driving system incorporates “the industry’s best long-range perception system capable of locating and identifying objects up to 1,000 meters away.”

Its perception system combines multiple sensors (cameras, LiDARs, and radars) with its proprietary computer vision technology. The information gathered is then interpreted by the company’s proprietary artificial intelligence (AI) tech.

TuSimple is partnering with Navistar International (NYSE:NAV) to manufacture a new line of purpose-built Level 4, Class 8 trucks equipped with TuSimple self-driving technology. (Level 4 refers to the five-level classification for autonomous vehicle systems that the National Highway Traffic Safety Administration has adopted. Level 4 vehicles are fully autonomous within certain situations.) The companies expect to start production in 2024. TuSimple management, which has said that its autonomous driving systems are powertrain agnostic, hasn’t disclosed whether these trucks will be electrically powered, but my guess is they will be.

TuSimple has an attractive business model. Its Autonomous Freight Network (AFN) is enabling the company to generate revenue while at the same time fine-tune its technology and line up buyers for its autonomous trucks when they become available. The AFN, which launched in July 2020, is described by TuSimple as an “ecosystem consisting of autonomous trucks, digital mapped routes, strategically placed terminals, and TuSimple Connect, a proprietary autonomous operations monitoring system.” Its AFN partners at the launch were UPS, Penske Truck Leasing, U.S. Xpress, and McLane, a U.S. supply chain services leader owned by Warren Buffett’s Berkshire Hathaway. The partners are making freight deliveries on some routes in the first phase of the AFN’s rollout in the United States. 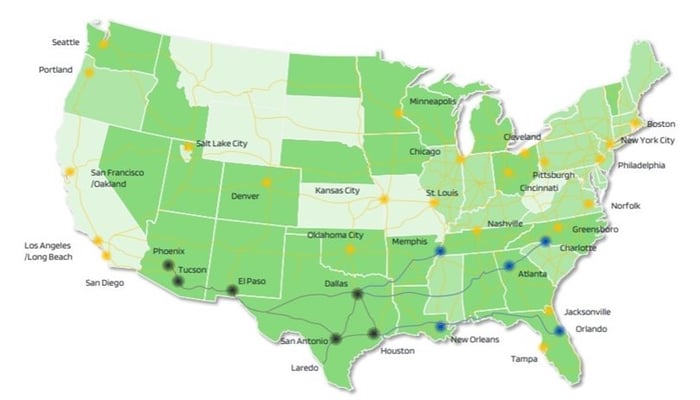 On May 10, the company released its first quarterly report as a public entity. In the first quarter of 2021, it generated revenue of $944,000, a more than three-fold increase from the year-ago period and up 28% from the prior quarter. Growth was driven by the increased use of the company’s fleet and its partner fleets, which it uses to supplement its capacity, to deliver freight for customers.

As we’d expect for a tech company that’s still heavily in the development stage, TuSimple is not profitable. In the first quarter, it posted a net loss of $389.3 million, though a large chunk of this loss — $326.9 million — was due to a change in the fair value of warrants liability. The company’s operating loss was a more palatable $58.6 million and it used cash of $46.7 million running its operations. Thanks largely to its IPO, which brought in more than $1 billion, it had more than $1.5 billion in cash and cash equivalents when it announced its Q1 results in May.

TuSimple guided for 2021 revenue in the range of $5 million to $7 million and said that it expects to end the year with a cash position of more than $1.3 billion.

Along with Navistar, TuSimple’s strategic investors include Volkswagen‘s (OTC:VWAGY) heavy-truck business Traton, which is in the process of acquiring Navistar; UPS; Union Pacific; Goodyear; and U.S. Xpress.

Graphics processing unit (GPU) specialist NVIDIA was one of TuSimple’s early investors. In 2017, it participated in a more than $20 million funding round of TuSimple, which incorporates some of NVIDIA’s technologies in its self-driving tech, as I wrote at the time. Its TuSimple investment was NVIDIA’s first investment in the self-driving truck space.

Cathie Wood began buying shares of TuSimple on the day of the company’s IPO, and ramped up her buying after the company reported its Q1 results in May. The stock is Ark Innovation’s 28th largest holding, accounting for 1.22% of its value, as of June 14. And it’s the 22nd largest holding in the Ark Autonomous Technology & Robotics ETF, accounting for 1.56% of its value as of the same date. Together, Ark’s two ETFs own about 2.2% of TuSimple’s shares.

A long runway (or highway, more aptly) for growth

TuSimple has phenomenal long-term growth potential. The global truck freight industry generates revenue of $4 trillion per year, according to the company.

TuSimple’s global market size number makes sense given the U.S. statistics from the American Trucking Associations. In 2019, trucks moved nearly 73% of all domestic freight tonnage, generating revenue of $791.7 billion, or more than 80% of the country’s total freight expenditure, according to ATA. These numbers make it easy to understand why it’s often said that “trucking is the lifeblood of the U.S. economy.”

There are some obvious catalysts that should spur companies around the world to replace their traditional trucks with self-driving ones, including cost savings associated with having to use drivers less often (perhaps eventually not at all) and from their trucks being involved in fewer accidents. Indeed, statistics show that the vast majority of vehicular accidents are due to driver errors which are caused by such things as being distracted or drowsy or otherwise impaired.

One major catalyst for adoption of autonomous trucks might not be as obvious: Companies in the U.S., Europe, and other regions have had a difficult time finding qualified truck drivers for many years. Some areas saw an easing of the driver shortage last year due to the COVID-19 pandemic, but this crisis is expected to worsen again this year, according to the International Road Transport Union (IRU). A “demographic time bomb” is how this organization characterizes the fact that the average age of professional trucks drivers globally is now close to 50.

Park TuSimple on your stock watchlist

TuSimple stock deserves a place on the watchlists of growth investors who are comfortable with companies that aren’t yet profitable. The company operates in a space with gargantuan growth potential, has many top-tier partners and investors, and has a hefty cash position.

Of course, there are other companies hoping to get a piece of what promises to be a massive market for autonomous trucks, so investors will need to monitor competition. But TuSimple seems on track to be the first mover in the space. As it said in its first-quarter letter to shareholders: “Our 1,000-meter perception has enabled us to be the only [autonomous] trucking company to demonstrate autonomous operations on both surface streets and highways up to 75 mph, positioning us as the industry leader.”