Bitcoin – How long can Bitcoin stay #1? Here’s an analysis of threats BTC faces in 2021

Home » Bitcoin – How long can Bitcoin stay #1? Here’s an analysis of threats BTC faces in 2021

Bitcoin – How long can Bitcoin stay #1? Here’s an analysis of threats BTC faces in 2021

Bitcoin is the largest cryptocurrency in the world and it is also the most popular. Have you ever wondered why? Although your answer is going to be a quick yes, let’s take a look at why this is so.

It is the largest due to its market cap, which is the product of price per Bitcoin and total Bitcoins in circulation. The more Bitcoins there are in the market or the more a Bitcoin is valued, the more the market cap rises. This further solidifies Bitcoin’s position at the top.

What gives Bitcoin its power to stay at the top? Besides the numerical value which allows it to secure the top position, what makes Bitcoin desirable enough by the masses for it to stay number 1?

This article will explore the logical, psychological, and even philosophical aspects that allow Bitcoin to reign supreme, followed by the threats that it could face.

This is perhaps the simplest aspect to tackle – Bitcoin’s position is so because of its market cap. The traditional world values a company by its market cap, which in turn provides information about the stock price of the company. The stock price is the reflection of how well a company is doing.

If the company performs well and has good profits, the shares of the company are sought out by investors, something that only pushes its price higher due to more demand. This further increases the market cap, hence, the company is more valuable. The same logic applies to Bitcoin; however, instead of profits, Bitcoin is valued based solely on its performance.

Bitcoin is peer-to-peer electronic cash, a characteristic that provides its value. Moreover, it’s a distributed ledger that stores data that can be overwritten or deleted. Like these, there are multiple characteristics like ‘store of value,’ ‘uncorrelated-ness’ etc., characteristics that give Bitcoin its value. Hence, people value it.

The value of Bitcoin is also derived from speculative trading. So, if the price of Bitcoin rises, the market cap rises, hence, more people flock towards it and cause the price to rise even further; a positive feedback loop of sorts.

If the loop does break during flash crashes, there are price floors that support the price and the reason for these floors exist is due to these aforementioned characteristics.

Hence, all of these working together not only gives Bitcoin its value but keeps it at the top.

When Satoshi Nakamoto launched Bitcoin, very few people understood it, and even fewer believed it could work. So, when it did succeed, it was a slow revolution, especially considering the inflows of institutional money in the last year. Moreover, it attracted and appealed to the younger generation of investors who are cynical of the inflationary monetary policy of the traditional world.

So, when a group of people realized that the inflationary fiat isn’t the only option, they slowly made the switch while bystanders did the same. This inflow of retail money into Bitcoin is what made Bitcoin into what it is – a retail-driven asset that is a store of value, uncorrelated to traditional assets.

Due to its adoption and its success where others failed, Bitcoin had a first-mover advantage and in fact, it still does. Due to its history, its network effects are wide and increasing every day.

Even today, the first-mover advantage is what remains, like a radioactive element that decays according to its half-life but never ceases to exist. Take, for example, Ethereum – While plenty of other blockchains have tried capturing its user base, none have even come close. There’s EOS (One of the largest ICOs ever), Tron, Binance Coin, etc., but none have the authority that Ethereum does.

What’s surprising is that even though Ethereum’s competitors have better scalability, decentralization, and security, people aren’t switching to other blockchains, and the so-called ‘Ethereum-killers’ are dead or are on their way to death.

Similarly, Bitcoin doesn’t scale like other blockchains, however, people still prefer Bitcoin. Something psychological is at work here, despite logical reasons contradicting the belief of many who use Bitcoin.

The philosophical aspect of Bitcoin has more to do with the early adopters, maximalists, etc. – People who are into the textual exegesis of any and all things connected to Satoshi Nakamoto. They try to interpret Bitcoin into what Nakamoto intended it to be or extrapolate it to what it should be.

However, what’s missing here is that even though these believers think it to be true, it doesn’t matter. It doesn’t matter what Nakamoto wanted Bitcoin to be, but what it is and how it got here.

Bitcoin is a complex construct of math, code, economics, and more, working in harmony without any hitch. While this fundamental, internal tenet remains unchanged, the perception of people about Bitcoin has kept changing and that’s what is important.

Because of this changing perception, Bitcoin has evolved, not just superficially, but also fundamentally.

As explained by Hasufly and Nic Carter, Bitcoin evolved from an E-cash proof of concept to a cheap p2p payments network used commercially and on the darknet, and when people realized in 2017 that this p2p wasn’t feasible, they moved on. Bitcoin evolved yet again into a censorship-resistant digital gold, which is the current narrative around Bitcoin. 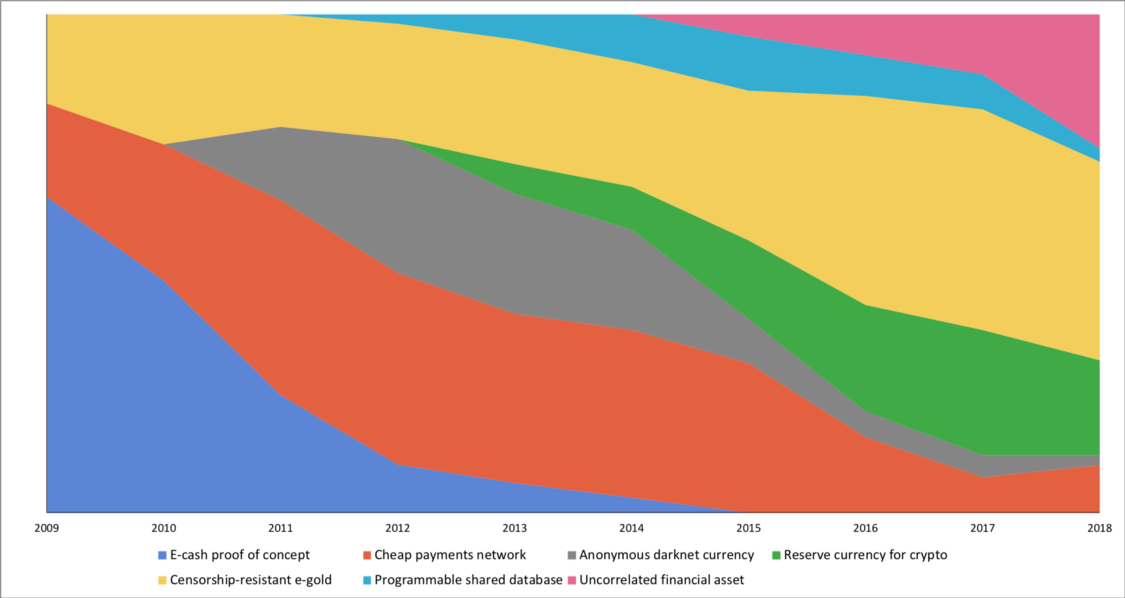 Another prevailing narrative is Bitcoin as a reserve currency for the cryptocurrency industry also being used as a speculative asset for trading.

Perhaps, the narrative that gives the rest value and boosts it is Bitcoin’s “uncorrelated-ness” to the financial world since it is largely a retail-driven market. Some of these narratives might become obsolete in the near future, however, that is only because Bitcoin is constantly evolving and morphing into something new.

This is not just applicable to Bitcoin’s narratives, but also its fundamentals. For example, this article explains how we could be facing a new evolution in Bitcoin’s cycles.

So, Bitcoin will remain #1?

Perhaps not. So far, we’ve seen a lot of cryptocurrencies vying for that second spot occupied by Ethereum. It has been occupied by XRP, ETH, LTC, etc., in the past. However, nobody talks about the flippening of Bitcoin, at least not without fantasies.

Is there a chance that a coin might overtake Bitcoin in the future?

Well, consider Yearn Finance’s YFI token as an example. The coin surged exponentially from being valueless to crossing Bitcoin’s ATH of $20,000 in a couple of months. The surge was due to the yield farming hype and it does have real-world applications and the potential to grow ten-fold in the future.

However, despite YFI’s exponential surge, its hard cap is only 30,000 YFI tokens. Hence, there is still a huge gap for YFI to even think about dethroning Bitcoin.

Hypothetically, should a coin with strong fundamentals as YFI and hype of yield farming arise again, could it then overtake Bitcoin’s market cap?

Perhaps it will, but as explained above, Bitcoin has the first-mover advantage and the psychological support from its user base, so it is unlikely that a new coin with better fundamentals will dethrone Bitcoin.

Simply put, even though Bitcoin’s supporters are philosophically attached to it, if Bitcoin outlives its usefulness, it will slowly lose value and wither away, perhaps become a relic like a minted baseball card that is important only in a small ecosystem.

Hence, a wildly unusual scenario where Bitcoin might be dethroned is where Bitcoin’s extremely important fundamental characteristics that give it value are ripped from it.

At present, Bitcoin’s store of value is the predominant narrative. Many bank officials and popular CEOs are advocating Bitcoin, some even suggesting that it is siphoning users from the original store of value asset – gold. Be that as it may, Bitcoin’s ‘store of value’ characteristic is due to its uncorrelatedness.

So, Bitcoin’s spot as the top crypto is solely dependent on its characteristic as a store of value, which is a result of its uncorrelatedness to the outside world. Perhaps, the moment that ceases to exist, I believe, Bitcoin’s value will slowly but surely start to wither away, leaving its throne empty.

Bitcoin – Bitcoin is again – however what do you wanna see?

Bitcoin – raghuram rajan: Why are traders gung ho on Bitcoin, Tesla? Raghuram Rajan has a principle

Netflix - Here's Why Burning Through Cash Is Good for Netflix