Bitcoin Price Bulls Come Out Fighting Ahead Of 10 Year Anniversary

by Oliver Smith
in Bitcoin
0

Bitcoin has come a long way in just 10 short years. Despite the bitcoin price struggling to regain its highs this year, the long-term trend is hard to ignore.

The bitcoin price is up a ridiculous 10.6 million percent since CoinDeskbegan tracking it back in July 2010 — rising from 0.06 cents to $6,421 over that time.

Next week, on October 31, it will be the 10th anniversary of Satoshi Nakamoto’s release of the bitcoin whitepaper — leading many to look ahead to what the next 10 years will bring. 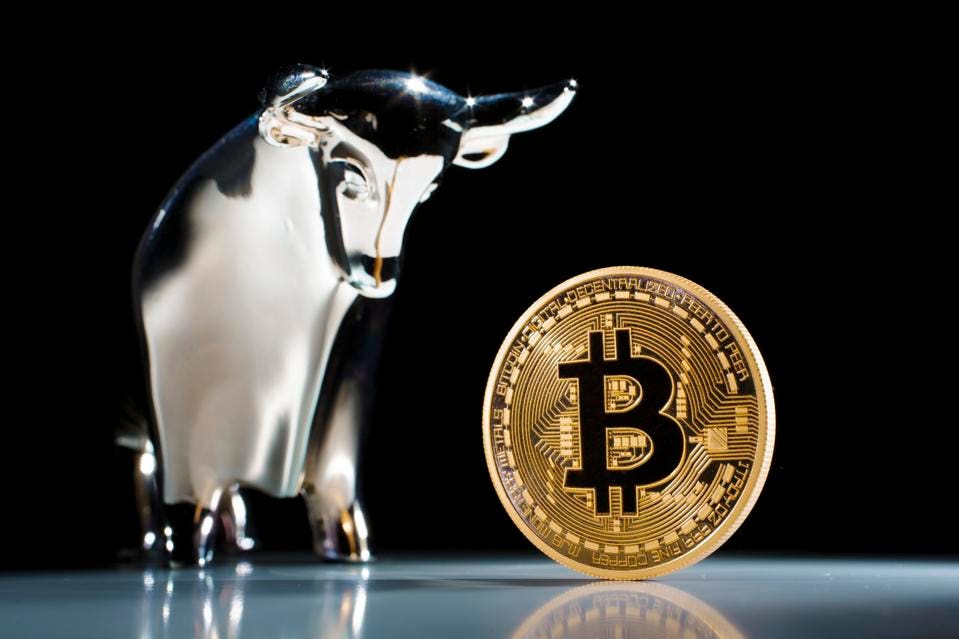 A physical bitcoin stands next to a bull on a desk on January 13, 2014 in Berlin, Germany. (Photo by Thomas Trutschel/Photothek via Getty Images)

Bitcoin has dominated investor interest over the last ten years, but that could be very different in the coming decade.

It’s only in the last five or so years that bitcoin has had any major competitors. Ethereum, the world’s second largest cryptocurrency by market capitalization, was first conceived in 2013.

Since then, hundreds of cryptocurrencies have exploded onto the scene, many of which were born and died in the cryptocurrency gold rush of 2017.

Bitcoin has maintained its so-called dominance over the sector, however. Bitcoin dominance — its share of the total cryptocurrency market capitalization — hit year-to-date highs in mid-September. Though it has fallen somewhat from those highs, it has remained above 50%.

Bitcoin dominance barely dipped below 80% until March last year, according to CoinMarketCap data. But it has lost ground to the likes of ethereum, ripple (XRP), bitcoin cash, litecoin, and dash since then. 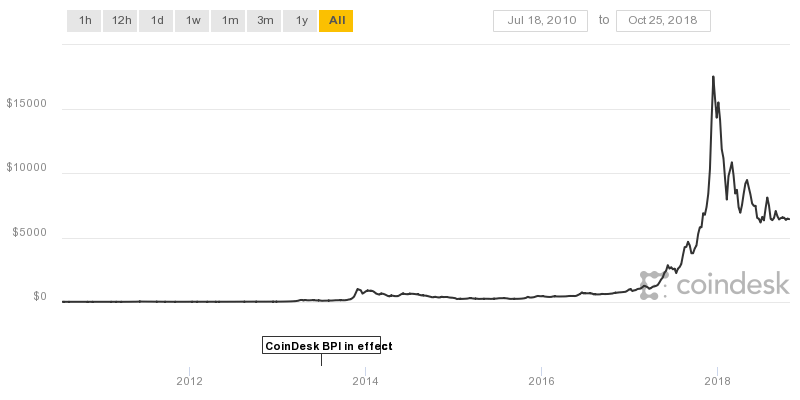 The bitcoin price has grown massively over the last 10 years.COINDESK

“I believe that bitcoin’s influence and dominance of the cryptocurrency sector will drastically reduce in its second decade,” said Nigel Green, founder and CEO of deVere Group, a financial advisory group.

“This is because as mass adoption of cryptocurrency grows, more and more digital assets will be launched – by organizations in both the private and the public sectors. This will increase competition for bitcoin and dent its market share.”

Green expects the bitcoin and wider cryptocurrency market will expand by “at least” 5,000% in the next 10 years — meaning it could be worth $20 trillion, up from $400 billion today.

Elsewhere, Jim Blasko, the founder of Bitcoin Talk Radio, has said the bitcoin price could climb above $100,000 toward the end of 2020 or the first quarter of 2021 — a wildly ambitious prediction he bases on how mining rewards are calculated on the bitcoin network. 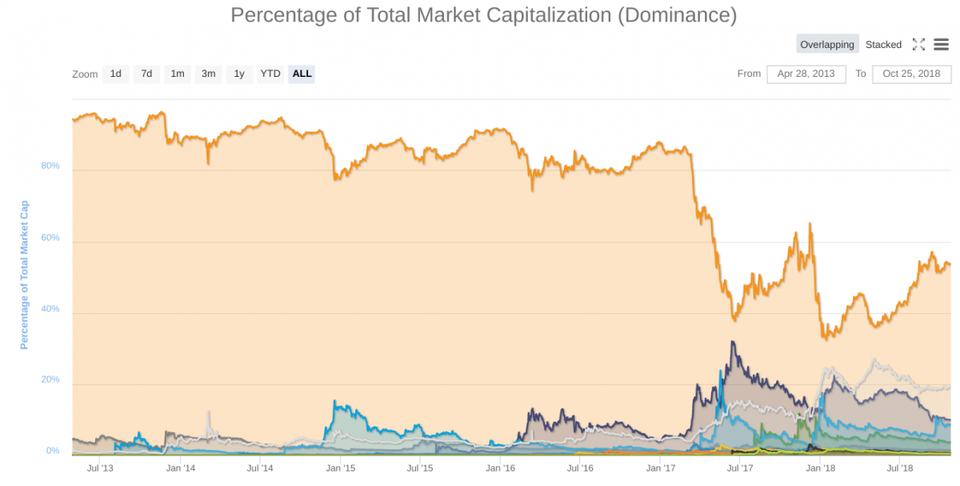 Bitcoin dominance has fallen in the last year but remains above 50%.COINMARKETCAP

Meanwhile, many bitcoin and cryptocurrency bulls are banking on a slew of institutional products on the horizon pushing prices higher.

A much-anticipated bitcoin exchange-traded fund, proposed by bitcoin companies VanEck and SolidX, is still being weighed by the U.S. Securities and Exchanges Commission.

Bakkt, a platform for trading, storing, and spending digital assets, was established earlier this year by the owner of the New York Stock Exchange,  Intercontinental Exchange, and is expected to begin offering bitcoin futures in December.

“A growing number of major institutional and retail investors, as well as financial institutions and regulators, amongst others, understand that cryptocurrencies are the future of money,” Green added. “As such, the market will have grown beyond recognition when Bitcoin celebrates its 20th anniversary.”

I am a journalist with significant experience covering technology, finance, economics, and business around the world. As the founding editor of Verdict.co.uk I reported on how technology is changing business, political trends, and the latest culture and lifestyle.

The Problems With Freelancing And How Blockchain Can Help