by Oliver Smith
in Bitcoin
0

The value of bitcoin hit an all-time high of nearly $20,000 in December 2017. Less than a year later, however, its value has dropped to about $6,400, according to digital-currency website CoinDesk, whose Bitcoin Price Index tracks prices from several key exchanges.

Still, even though bitcoin is worth a lot less today than it was at its peak, if you invested $1,000 five years ago, you would have made a profit.

This estimate does not include any additional fees or transaction costs. 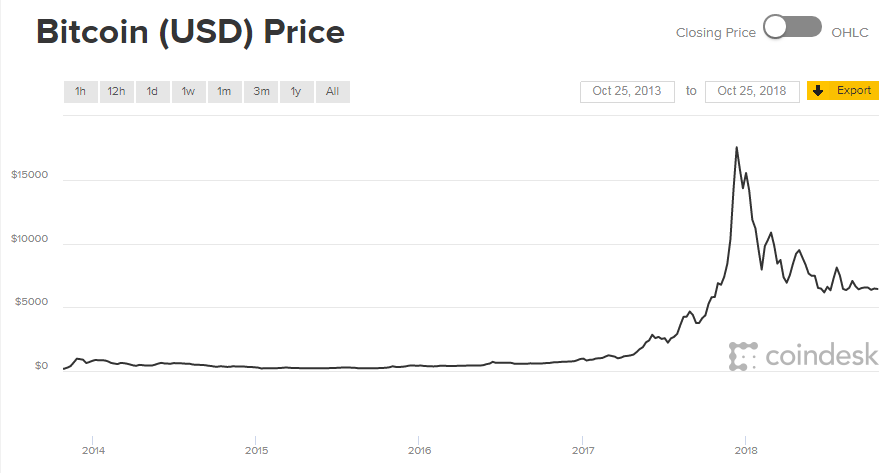 Volatility is pretty common for cryptocurrencies. Ethereum, once valued near $1,300, according to digital-currency tracker coinmarketcap, is now hovering around $200. Digital currencies XRP and Litecoin have seen similar declines.

That’s part of the reason seasoned investors say to use caution when approaching crypto.

Billionaire entrepreneur Mark Cuban and “Oracle of Omaha” Warren Buffett, for example, have both warned that bitcoin’s value is unstable. Legendary investor and Vanguard founder Jack Bogle, at a Council on Foreign Relations event, told the audience, “Avoid bitcoin like the plague.”

“Bitcoin has no underlying rate of return,” he said. “You know bonds have an interest coupon, stocks have earnings and dividends, [and] gold has nothing. There is nothing to support bitcoin, except the hope that you will sell it to someone for more than you paid for it.”

More recently, at a congressional hearing on Capitol Hill, global economist and New York University professor Nouriel Roubini said, “Crypto is the mother or father of all scams and bubbles.” He called out “swindlers” who tapped into investors’ fear of missing out and took them for a ride with “crappy assets that went into a bust and crash — in a matter of months — like you have not seen in any history of financial bubbles.”

If you are considering investing in cryptocurrencies, think of it like a trip to Vegas, self-made millionaire and best-selling author Tony Robbins suggests. In his own portfolio, Robbins directs a certain amount of money to risky ventures, but he doesn’t rely on them to work out. For those investments, he said, “I know it is just for fun I’m investing, I know I could lose.”

Bitcoin Price Bulls Come Out Fighting Ahead Of 10 Year Anniversary

The Problems With Freelancing And How Blockchain Can Help