With the recent influx of corporate interest in bitcoin, the cryptocurrency is poised to accelerate into the mainstream.

Bitcoin is now a $1 trillion asset. It is more valuable than Tesla and Facebook, And as of now, only six companies have higher market capitalizations than Bitcoin.

However, I am not interested in talking about Bitcoin’s “mad gains.” I want to talk about the dominating narrative behind Bitcoin in late 2020 and so far in 2021: increased institutional investment.

Before I do, here is a small primer. What exactly is Bitcoin? Well, according to Lily, a 3-year-old who is also a bitcoin HODLer, “Bitcoin is digital money.” I couldn’t have put it better myself!

As far as institutions are concerned, Bitcoin has jumped from undesirable to undeniable. A few years ago, some of the biggest names in finance were dismissing Bitcoin as a scam. Warren Buffet went so far as to label it as “rat poison squared.” JP Morgan also jumped on the Bitcoin hate train and labeled it a scam. JP Morgan has since changed its tune and is now expecting the price of Bitcoin to rise as high as $130,000, labelling it “digital gold.” They have since created a “Cryptocurrency Exposure Basket” of Bitcoin proxy stocks.

Tesla and Elon Musk have been dominating the headlines because of their $1.5-billion investment in Bitcoin, and they are now accepting Bitcoin as a payment method for Tesla vehicles. Before that, MicroStrategy, the largest independent, publicly traded business intelligence company, had purchased more than 90,000 BTC.

Bitcoin is considered a potential hedge against global economic instability, but as Tyler Winklevoss said, the opportunity lies in being an early adopter.

Why Are Institutions Flying In?

Institutions are currently dipping into the market because they now understand Bitcoin‘s credibility as a store of value. Bitcoin has come to be considered as a safe-haven asset alongside gold, and never has this been more evident than during the COVID-19 pandemic. Over the last year, Bitcoin has outperformed every other asset class significantly. At one point, it was outperforming the Nasdaq 100 by 300% and the S&P 500 by almost 1600%.

Because of the unique challenges presented by 2020, Bitcoin has been able to add credence to its status as a capital-preservation asset that can act as a hedge against financial uncertainty.

I believe that this narrative is going to remain strong during the next decade. Many Fortune 500 companies will follow Tesla‘s lead and convert parts of their balance sheets to bitcoin. Companies like MicroStrategy and Chamath Palihapitiya’s Social Capital are already ahead of the curve with their large investments, and many others will continue playing catchup. Square CFO Kate Rooney, subsequent to the purchase of an additional $170 million worth of bitcoin, said, “Bitcoin has the potential to be the native currency of the internet, and we want to participate in it.”

We may see more retail companies selling their products directly for bitcoin, which will open up further use cases. Indeed, Tesla is already accepting bitcoin for their vehicles.

Are ETFs Going To Open The Floodgates?

Earlier in February, the Ontario Securities Commission made a landmark decision to approve Purpose Investments Inc.’s application to launch a Bitcoin Exchange Traded Fund (ETF), the first legal and fully regulated Bitcoin ETF in North America. Within its first 48 hours, the ETF had already collected $421 million, crushing all estimates. Proportionally speaking, this is the equivalent of a US ETF taking in $8 billion in the first 2 days. It is on pace to become the biggest ETF in Canada in 20 days.

Previously, both Gemini Exchange and investment firm VanEck attempted to bring regulated Bitcoin ETFs to the North American market. However, they were both rejected multiple times by the US Securities and Exchange Commission (SEC). Luckily, President Joe Biden has nominated Gary Gensler, a cryptocurrency researcher and professor, as the next SEC chair, and it is highly likely that the US will finally get a Bitcoin ETF soon.

So, why is this major news?

ETFs could bring in a whole new class of institutional investors looking to diversify their portfolios while minimizing their risk exposure. In addition, ETFs provide a low-cost way of entering a new market, are tradeable 24 hours/day, and always maintain high liquidity. All of these factors make them darlings of institutional investors, and this bodes well for Bitcoin.

The Positive Implications Of Institutions Rushing In

There are both short-term and long-term implications of institutional investors rushing in and investing in Bitcoin. The most obvious short-term factor is the shock-and-awe effect of a rockstar company like Tesla buying vast chunks of bitcoin. It often acts as a “shot-in-the-arm” for the price of bitcoin and pushes it to new heights.

However, the long-term implications are what’s really interesting. Bitcoin has a maximum supply limit of 21 million coins. Of them, more than 18.5 million have already been mined. With only 2.5 million coins left to mine, and institutions showing more interest, there is a huge supply crunch incoming, which will make the price shoot up.

The author who came up with the concept of a “black swan event,” Nassim Nicholas Taleb, has written a slew of hate tweets about Bitcoin. Calling Bitcoin a “failure,” Taleb said: 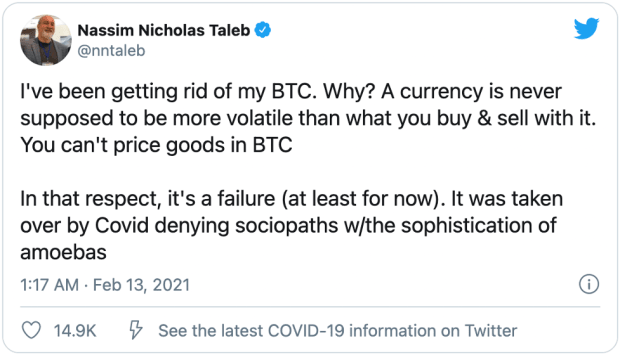 I believe that this criticism is unfair because currently, Bitcoin’s primary use case is as a store of value. The mode of regular payment” will be layers of abstraction above Bitcoin. It is a testament to Bitcoin’s versatility that it has so many potential use cases and is robust enough to build an entire ecosystem around. Bitcoin has only been around for 12—13 years, and as the network becomes more mature, we will see more sophisticated financial products.

Moral Of The Story: Despite Bitcoin’s explosive growth, don’t forget that the market is still very young and has more space to grow. Bitcoin has become a trillion-dollar asset in such a short period because it represents a proper paradigm shift.

Some economists may continue to hate Bitcoin with a passion because it is such a trailblazing asset that works differently from the traditional legacy markets. After all, technically, Bitcoin goes against conventional economics.

However, sooner rather than later, everyone will have to evolve with the times. The companies evolving with this changing fintech landscape, like Tesla, MicroStrategy, and Square, have realized that in the future, finance will run on the internet and not in the stunningly super-fancy buildings of Wall Street. For now, we need that criticism.

As Elon Musk put it, with the benefit of hindsight, institutional investment in bitcoin was inevitable. This sentiment has further solidified Bitcoin as a legitimate asset class and the most robust hedge against financial uncertainty. The COVID-19 pandemic has proven the latter to be completely and irrevocably true. With major companies like Oracle rumored to be investing in bitcoin next, I expect 2021 to be a watershed year when Bitcoin firmly secures its place in the mainstream.

Bitcoin price – What Is Cryptocurrency? Here’s What You Should Know

Luxury Cars - Why does Spotify call Jay Park the 'hustle king' of K-pop? He left idol group 2PM, started his own ...