A gold shop in the Yaowarat area of Bangkok. Gold prices are surging as investors seek safe-haven assets.

The third coronavirus wave in Thailand is pushing investors towards safe assets like gold, with online gold transactions doubling between April 15-16 as the global price reached a seven-week high, according to Hua Seng Heng Group, one of the country’s large gold traders.

The spot gold price rose to US$1,769.41 (55,200 baht) on late Thursday (10.30pm) after the US bond yield sank to a four-week low as tensions between the US and Russia flared after Washington announced it was expelling 10 Russian ambassadors in retaliation over Russia’s interference in last year’s presidential election.

He said online trading has grown for many consecutive years and its growth sped up in the first quarter last year thanks to the pandemic, driving the gold price to $2,000 for 28.3g, and local gold bullion to 30,000 baht per one baht last August. 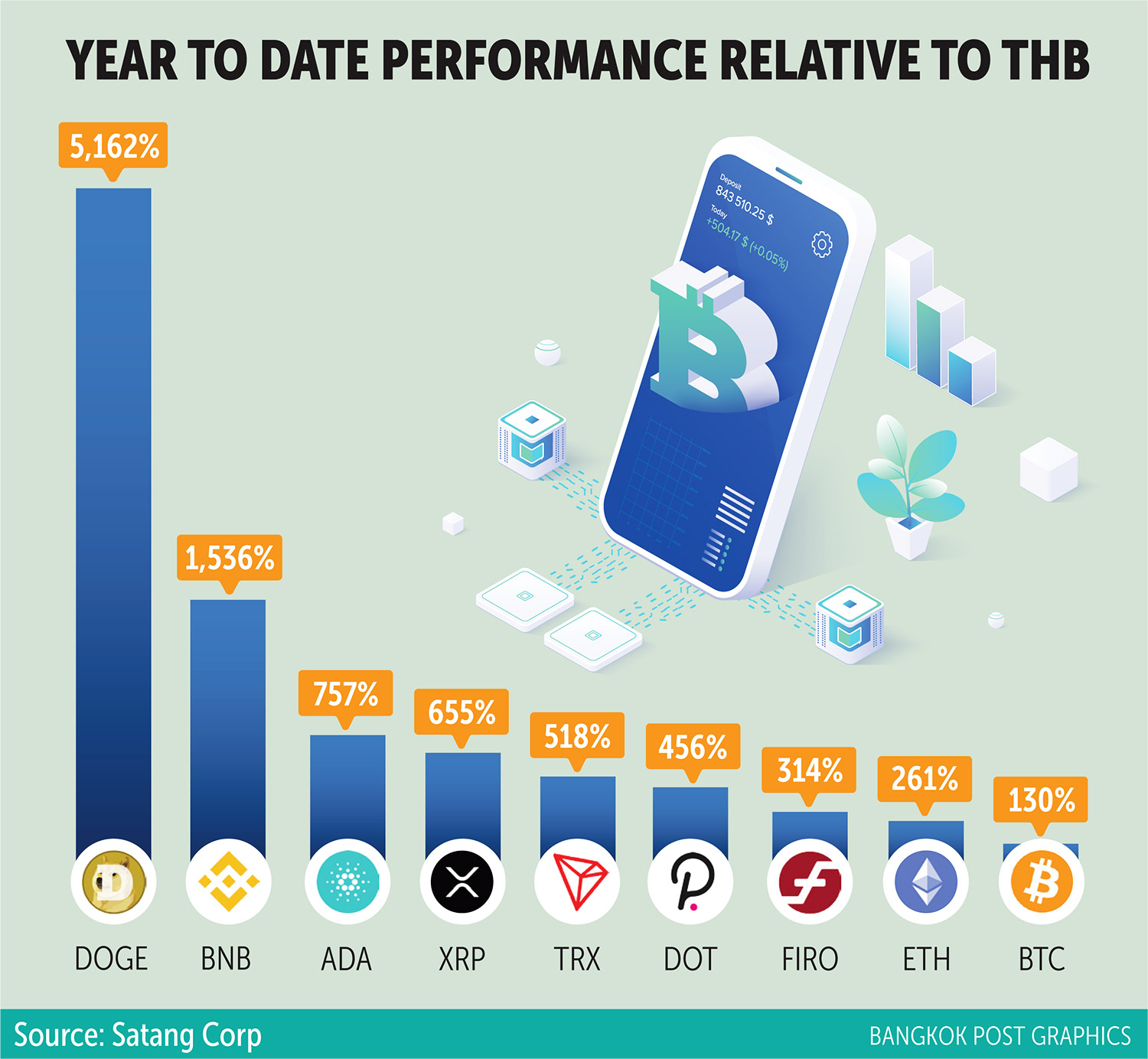 “The number of new online accounts and the trading volume for online gold has continued to grow this year, spurred by the outbreak,” Mr Tanarat said.

The gold price sank to this year’s low of about $1,700 in March, below 25,000 baht, which triggered accumulative buying for many people, he said.

“Gold could reach $1,800 this year with the support of two factors: the decline of US bond yields and increasing geopolitical tension between the US and China,” said Mr Tanarat.

In addition to gold, trading of assets that are typically available online such as cryptocurrencies has also been active during the outbreak. Many altcoins have surged to all-time highs following bitcoin, which already surpassed the 2-million-baht milestone this week.

Poramin Insom, founder and director at Satang Corp, said the outbreak has not had a negative impact on the trading of digital assets.

Digital exchanges have already prepared business continuity plans in advance to deal with the pandemic, and most of the staff can work from home, he said. 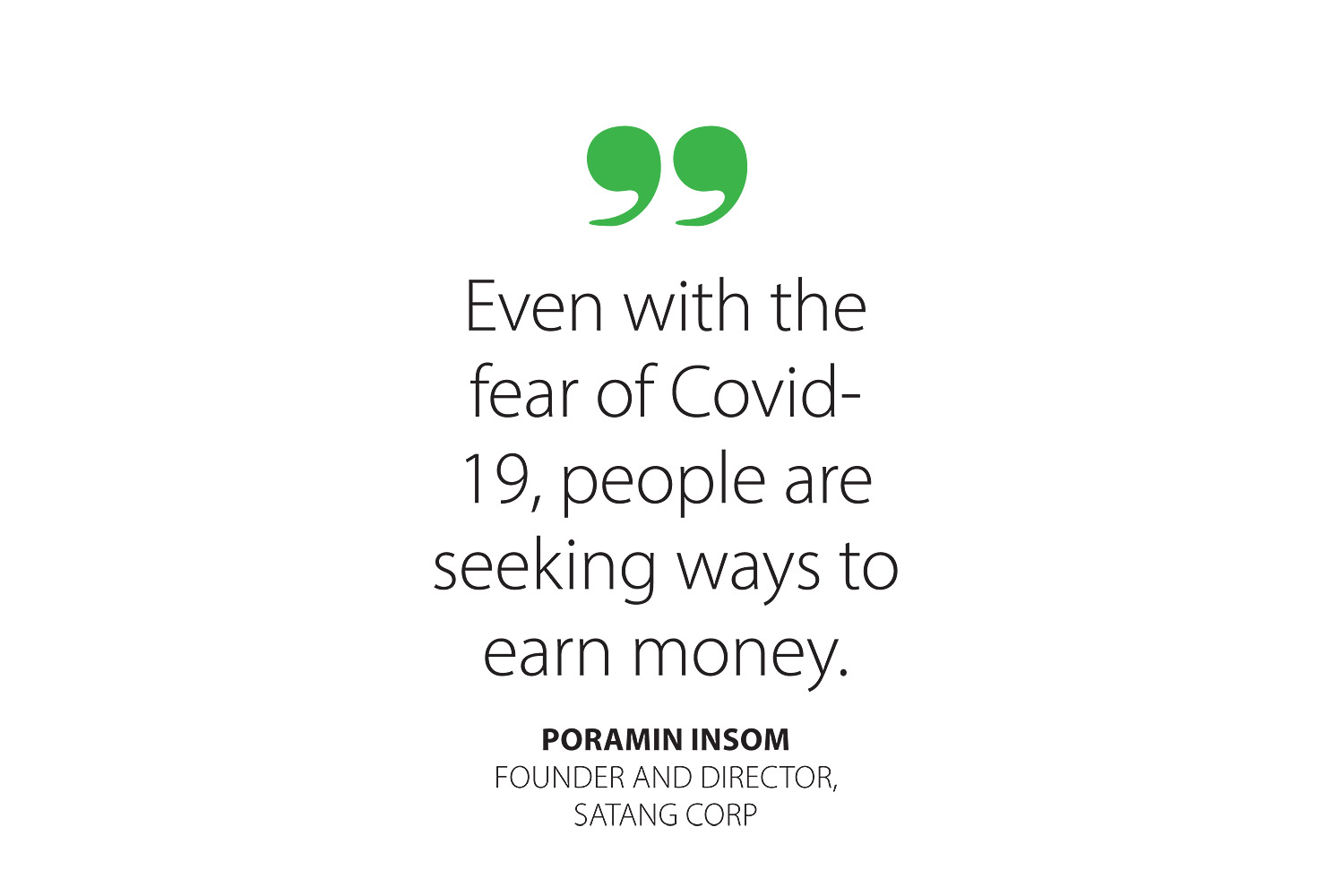 During the week, global digital exchanges watched while their trading volumes grew to record highs.

Coinbase, the largest cryptocurrency exchange in the US, listed on Nasdaq on April 14 and reported total revenue of $1.8 billion in the first quarter, surpassing last year’s revenue of $1.2 billion for the whole year.

“Even with the fear of Covid-19, people are seeking ways to earn money,” Mr Poramin said.

He said 9,254 altcoins have been issued to raise money for startup projects, but only 1-2% of them have succeeded.

Cryptocurrency traders should be aware of the risk and choose to invest in only the top 200-300 of exchanges’ lists of altcoins, said Mr Poramin.

In contrast to gold and cryptocurrencies, Thai bank, retail and tourism-related stocks plunged yesterday due to fears of a prolonged lockdown and economic slump following the surge of Covid-19 cases.

However, the SET Index still managed to rise thanks to an increase in global oil and petrochemical stock prices, and the prospect of gains for electronics and rubber glove stocks.

The Thai stock market rose 0.5% after the government announced it will not impose nationwide lockdowns or curfews.

Padon Vannarat, head of research at Yuanta Securities, said the SET Index still has the support of global oil and petrochemical stock prices, as energy is a large sector in the SET.

Investors are speculating on stocks likely to benefit from the pandemic, such as STGT and DELTA, he said.

However, as the number of Covid-19 cases continues to rise, Mr Padon suggests investors follow announcements regarding new government measures to curb the pandemic, as many more are expected.

“We don’t think there will be a nationwide lockdown as happened with the first wave,” he said.

“Only retail stores and restaurants in at-risk areas will face limits on opening times and the scope of activities allowed.”

Bitcoin price – Crypto: Is Bitcoin worth the energy and environmental costs?