A fork of Bitcoin Cash, Bitcoin SV has recently suffered a 51% attack, which followed similar malicious attacks last month that were organized by an unknown party.

The attack on Bitcoin SV was first made known by Lucas Nuzzi at CoinMetrics, who stated that there was some “serious hashing power” unleashed and that the malicious actors were succeeding.

According to Nuzzi, over 12 blocks were being reorganized and up to three versions of the blockchain have been mined simultaneously across pools. The attack lasted for around 12 hours, and the perpetrators were able to reorganize roughly 14 blocks.

Bitcoin SV has long suffered controversy with its reputation and its trustworthiness, which depends on the immutability of the blockchain. Craig Wright, one of the leaders behind BSV, has long claimed to be the Bitcoin creator Satoshi Nakamoto.

A 51% attack can occur when a single entity is able to control 51% of the total hash rate of the blockchain. While these attacks usually occur on weaker blockchains that are unsafe and lack appeal to miners, the entity can then decide which new blocks are added to the blockchain.

Other blockchains, including Ethereum Classic, Verge and Bitcoin Cash have suffered 51% attacks as well.

The Bitcoin Association also acknowledged the attack on BSV and requested that node operators on Twitter invalidate the fraudulent blocks.

Numerous crypto exchanges, including Huobi, OKEx and Bittrex, suspended Bitcoin SV transactions in June when the previous attack occurred. Other exchanges could continue to delist the forked token given the latest attack.

On June 24, an unknown operating entity engaged in a series of malicious block reorganization attacks on BSV, also known as a “block-withholding attack.” The last of the series of attacks occurred on July 9, and the identities of the perpetrators have not been confirmed.

Bitcoin SV price dropped below the 50-day Simple Moving Average on August 4, suggesting that BSV could continue to trend downward.

The trading volume of BSV has been quite lackluster over the past two months, leaving Bitcoin SV price little room to move to the upside. 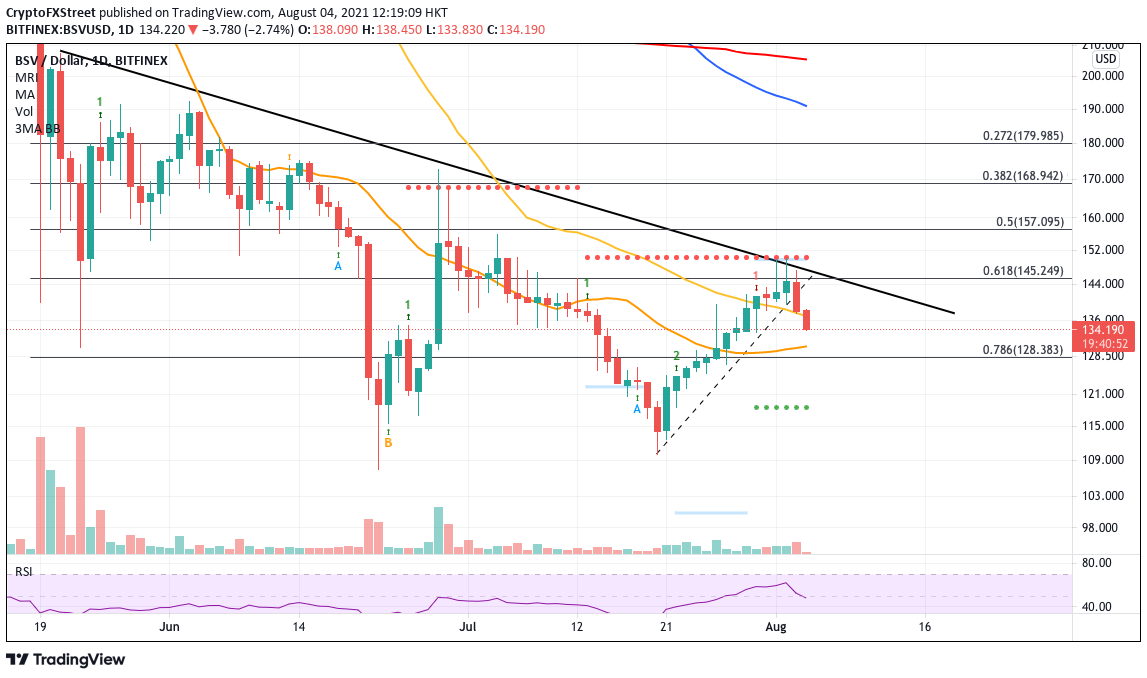 In light of the recent attack, BSV bears could target the 20-day SMA at $130 before reaching a lower target at the 78.6% Fibonacci retracement level at $128. Should Bitcoin SV price fail to hold this level, the forked coin could be at risk of retesting the July 20 low at $110, before potentially recording a lower low.

Given the stiff diagonal resistance trend line, BSV has little chance of recovery, and any buying pressure could only incentivize Bitcoin SV price to tag the 61.8% Fibonacci retracement level at $145. Further upside potential is unlikely for the short term.