Details of the Deal

Valued at $24 million, the contract is projected to be completed in February 2024. Per the terms, Boeing will procure additional software builds to provide correction of deficiencies, to include software enhancements or improvements, engineering analyses and evaluations, and integration and test activity for supporting the P-8A Increment 3 Acoustics Multi-static Active Coherent (MAC) Enhancements program.

Notably, the MAC system is an active sonar system composed of two types of sonobuoys (source and receiver) and an acoustic processing and aircraft mission computer software suite. It is employed by the Navy’s maritime patrol aircraft (P-3Cs and P-8As) to search for and locate threat submarines in a variety of ocean conditions.

Majority of the work related to the deal will be executed in Huntington Beach, CA.

The P-8A Poseidon is militarized with maritime weapons, which patrol the globe, performing anti-submarine and anti-surface warfare, intelligence, surveillance and reconnaissance, and search and rescue missions. Seven nations across the globe have selected the P-8A as their future maritime patrol aircraft including South Korea and New Zealand.

This indicates the global demand that this jet model enjoys, which is further evident from the latest contract win.

Of the varied defense equipment that Boeing manufactures, the company’s strength lies in the development of combat-proven aircraft, such as P-8A Poseidon. Additionally, Boeing started developing military aerial refueling and strategic transport aircraft for its fixed-wing military aircraft programs. Such notable developments are anticipated to fuel this aerospace giant’s growth, considering the increasing defense spending provisions made by the current U.S. administration.

Being the United States’ largest jet maker, Boeing enjoys a smooth flow of contracts for military jets and its associated upgrades. The latest contract win is an example of the same.

In a year’s time, shares of Boeing, a Zacks Rank #3 (Hold) company, have surged 66.2% compared with the industry’s 25.3% rise. You can see the complete list of today’s Zacks #1 Rank (Strong Buy) stocks here. 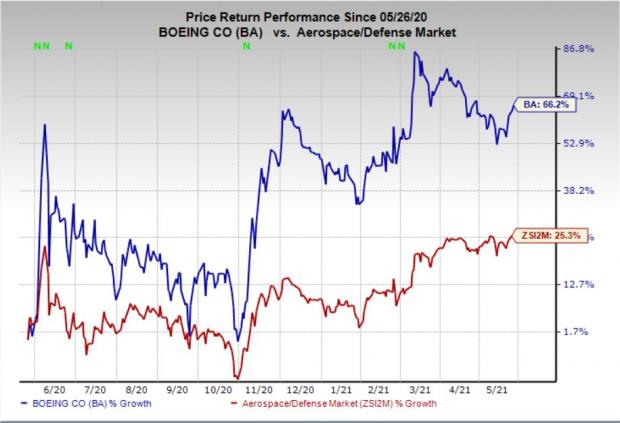 In addition to the stocks you read about above, would you like to see Zacks’ top picks to capitalize on the Internet of Things (IoT)? It is one of the fastest-growing technologies in history, with an estimated 77 billion devices to be connected by 2025. That works out to 127 new devices per second.

Zacks has released a special report to help you capitalize on the Internet of Things’s exponential growth. It reveals 4 under-the-radar stocks that could be some of the most profitable holdings in your portfolio in 2021 and beyond.