Home » Boris Johnson News – Clare Norburn on how she came to write her ambitious Zoom-era drama, ‘Love in the Lockdown’

Love in the Lockdown started out as my “Lockdown 1.0 project” – although, of course, we didn’t call it Lockdown 1.0 back then. We didn’t know other lockdowns would follow and that nearly one year on, here we would be, locked down again with theatres and concert halls still closed.

It seems inconceivable now, but a year ago, I had never heard of Zoom. Right now, I live on Zoom: my online play with music is being rehearsed, directed and filmed over Zoom – and by actors and musicians on their phones and recording devices. The nine short episodes are directed by Nicholas Renton and star Alec Newman, Rachael Stirling and Leila Mimmack, with comedian, impressionist and actor Jon Culshaw in a cameo as the voice of Boris Johnson.  The episodes are being released in real time on the first anniversary of key points in the build-up to, and during, Lockdown 1.0, and will be available to watch until 31 May. (Each episode will be streamed on Facebook and YouTube in real time a year on from that same point in 2020.)

I originally intended Love in the Lockdown to be experienced in one sitting, but I realised that a 100-minute play didn’t really work with people’s concentration span online. Plus, there’s something about a first anniversary that has a particular intensity. You are still close enough to “smell” the direct experience, as it were, and yet you also have enough distance to see the landscape around it.  Add the cycle of the seasons: how the smell of cherry blossom takes you directly back to that moment a year ago when…. well, you get the picture. And so I saw the potential of releasing this in short episodes.

I came to writing late. My background was as a singer (Norburn pictured right by Robert Piwko), specialising in medieval music. I started writing because I wanted to demystify music and make it accessible to non-concert-goers. So, I wrote “concertplays”, where classical music and drama collide, with the music tightly embedded into the drama. Usually, I explored the lives of historical characters, often composers. It meant research, and then closing one’s eyes to imagine characters’ feelings and the landscape of their inner world.

Writing Love in the Lockdown was different. Although I had a historical anchor (parallels with the 1348 Black Death), this time my “research source” were the news headlines and my own experience. Lockdown meant nearly eight weeks of separation from my boyfriend. I know now that it was eight weeks, but at the time it was three weeks, with the deadline being constantly kicked into the long grass.  There were times when I wondered if I would ever see him again, not counting the videophone. We entered a strange world of Victorian prudery, where partners who lived apart didn’t really exist.  On day two of lockdown, Jenny Harries, Deputy Chief Medical Officer, rather embarrassedly suggested that partners who didn’t live together should “test your strength of feeling” and consider shacking up together.  I was a year out of a 20-year marriage and three months into a new relationship. That just didn’t seem realistic.

So, on my own in my garret, I applied for an Arts Council England Emergency Response Fund grant. And when thinking about what I might realistically do, I remembered The Decameron by Boccaccio. Set in Florence in 1348, The Decameron opens with Boccaccio’s own experiences of the Black Death. He goes on to write a 14th Century box-set of 100 stories told by 10 young people to while away their time in quarantine.

I started to stitch together a pandemic love story – a surprisingly light comedy – but with serious moments. I invented a playwright, Giovanni, and a medieval musician, Emilia (played by Stirling, pictured below). They meet at a dinner party in late February 2020 and start awkwardly navigating their first date via Zoom. Alongside their burgeoning relationship, they plan a creative collaboration, reimagining The Decameron in 2020. While Giovanni reworks the narrative for a TV lens, updating it to an inner-city estate, Emilia and her ensemble, played by my real-life medieval music group The Telling, work on music from 14th-century Italy and by the French poet and composer Guillaume de Machaut. 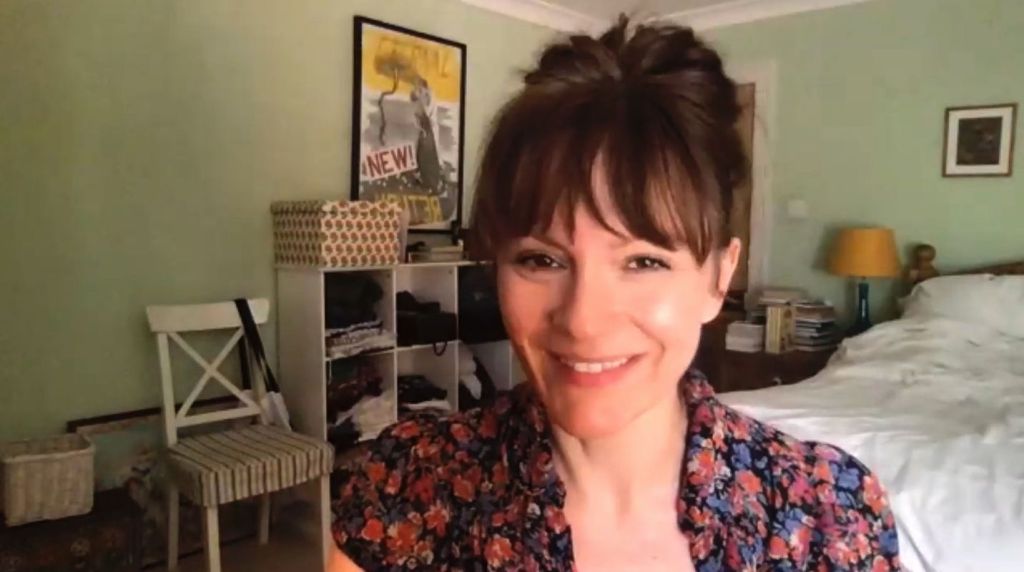 Emilia falls through the cracks of government support and is forced to take a job in a supermarket, stacking shelves in order to pay her rent. She comes home wanting to work on the project but is emotionally, physically and creatively drained. Like so many artists in the face of lockdown, she loses a sense of her own creativity. She stops making music.

Music has an extraordinary ability to cut a laser beam straight through to our feelings and to transport us straight into a memory. But the sad fact with Love in the Lockdown is that that alchemy and interaction simply cannot happen online in the same way; Emilia has a speech about this and about how the challenge we have, as artists, is that we don’t have an easy language to articulate the very magic of why live performance matters so much.

Ultimately, though, there is optimism in the play. Giovanni and Emilia each discover an artistic future for themselves, grounded in something truthful. And that reflects my belief and hope for the future of the arts. It’s been tough and will continue to be. But now, as we stagger out into the sunlight, my hope isn’t just about the vaccine roll out and the roadmap to recovery. My wish is also that the pain of the pandemic will create a resilient breed of artists who have gained new insights and compassion through their experiences over the past year – who are compelled to navigate the path towards their own “artistic truth”, to grasp what really matters and to reflect that in our art.

Mastercard Stock Over 5% Up So Far Today