– Johnson to detail lockdown exit on Monday
– GBP Gains of +1.0% against Euro and U.S. Dollar last week
– UK vaccination lead cited as one important source of support
– But cautious exit from lockdown could slow GBP advance

The British Pound has cemented its status as the best performing major currency of 2021 following a week that saw additional gains recorded against all its G10 peers, with +1.0% advances being seen against the Euro and Dollar.

Analysts have cited the UK’s rapid vaccination programme as one crucial pillar of support for the currency’s advance, however researchers at a major European investment bank warn the currency could lose its comparative edge should the UK exit lockdown too slowly.

“We think that the UK government would err on the side of caution with regards to exiting the lockdown, and this much could disappoint the GBP bulls,” says Valentin Marinov, Head of G10 FX Strategy at Crédit Agricole.

With this in mind, all eyes will be on Prime Minister Boris Johnson on Monday evening when he unveils the government’s roadmap out of lockdown.

The Government will approach its lockdown exit strategy with a fair wind behind it courtesy of the rapid fall in cases across the country owing to the existing lockdown while data is starting to hint at a positive vaccine effect in mortality and hospitalisation figures.

As of Friday the UK had vaccinated a third of its adult population which amounts for a significantly greater proportion than that achieved in the U.S. and Eurozone.

Crucially, the most vulnerable portion of society, the above 80’s, have now all received their first dose.

As the following chart from Crédit Agricole shows, there is some merit in suggesting Sterling’s performance is tied to the rollout of vaccines: 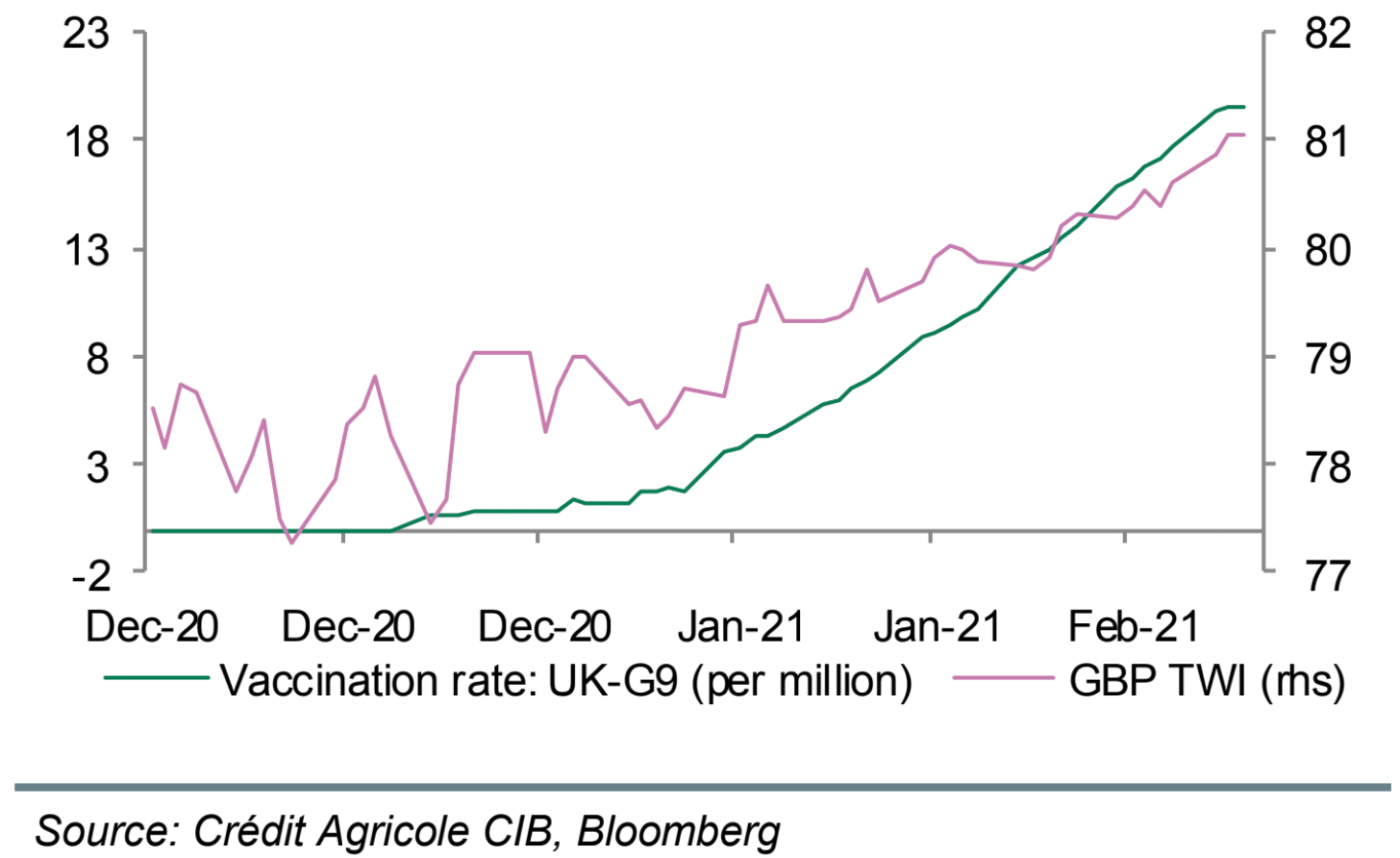 “Sterling continues to reap the dividends of a successful vaccine rollout and momentum is building towards a reopening of the economy – probably starting with schools on 8 March. This should be supportive of the post Brexit re-rating of UK asset markets (very observable in the UK Gilt market on Friday) and keeping GBP supported,” says Francesco Pesole, FX Strategist at ING.

The Pound-to-Euro exchange rate moved above the psychologically and technically significant level of 1.15 during the week past while the Pound-to-Dollar exchange rate hit 1.40 for the first time in over two years.

An assumption is that vaccinations will allow for the UK to unlock the economy in a confident manner that will trigger a pulse of economic growth that overshadows that of countries where restrictions remain in place, this dividend in turn provides support for Pound exchange rates.

However, it is expected the process will be slow with Johnson likely to be cautious, which could delay the country’s economic recovery somewhat.

“The building recovery optimism is not without risks. The UK government is expected to set out their plans to begin reversing COVID restrictions on Monday. Press reports suggest that the government will unveil a very cautious approach to lifting restrictions as it still seeks to suppress the spread of COVID while vaccines are rolled out given the threat posed by virus mutations,” says Derek Halpenny, Head of Research at MUFG.

In an article in The Telegraph, The Spectator’s Editor Fraser Nelson says an excess of caution in releasing lockdown could see the country fall behind much of the rest of Europe.

If the recent GBP/EUR advance is founded on the expectation that the UK will outperform the Eurozone economy over coming months as the UK economy is unshackled, then it follows an overly cautious approach could undo some of the advances.

Fraser says there is a sense in some government circles that “lockdown mission creep” is setting in, where the justifications for keeping lockdowns in place evolve for the sake of keeping the lockdown intact.

“Just last month, the plan was to reopen schools once the over-80s were offered a vaccine (ie, about now). Then, lockdown was to stay until most over-50s were covered. Next, a new concern: what if vaccines don’t impede transmission of the new variant? It turns out that they do. Now there’s talk about a shift to Covid cases: something that vaccines were never going to eliminate,” says Nelson.

He quotes a member of government involved in lockdown policy as saying: “It’s not just that the goalposts are being moved… the scientists keep changing the game we’re playing.”

“The apparent success of its vaccine campaign notwithstanding, we think that the UK government would err on the side of caution. In turn, this could disappoint FX investors who have been aggressively adding to their GBP longs in anticipation of a more rapid opening up of the UK economy and have pushed the currency into overbought territory,” says Marinov.

“A slow lifting of restrictions could disappoint expectations for a faster pace of recovery on the back of the vaccine roll out at least in Q2,” says Halpenny.

Boris Johnson News – Independence is ‘the only way’ to avoid the damaging cost of Brexit, say SNP