Coal is still booming in India and highwall miners are a part of that to the point where one of the country’s leading Cat dealers, Gainwell, is now making these machines under license from Caterpillar over four years after it discontinued the business. IM Editorial Director Paul Moore spoke to Gainwell’s Dipankar Banerjee, Chief Operating Officer, Mining Business and Jayanta Bhattacharya, Head of Manufacturing about this unique story.

At the end of 2016, Caterpillar had announced that it would stop making new room and pillar Products, including closing its Houston, Pennsylvania factory, saying that a major reason was the concentration of demand in the Appalachian Mountain region of the US which was a slowly declining market. The discontinued business included continuous miners, coal utility vehicles, feeder breakers, roof bolters and haulage systems, but also highwall miners. Banerjee told IM: “It was a correct decision by Caterpillar – as the US was 60% of their global room and pillar market, and with the coal market in decline and no new underground coal mines planned, equipment demand had dropped significantly. While Cat no longer made new machines, they continued to support the existing equipment population in the field.”

He adds: “However, in India, coal is not a bad word – almost 70% of India’s energy comes from thermal coal and we continue to build new coal fired power plants and therefore continue to open up new coal mines. Our current coal production is around 730 Mt per year.  The Indian Government and Ministry of Coal have taken lot of initiatives including major policy reforms to open up the coal sector to the private sector, to increase the domestic coal production to 1 billion tonnes or more by 2023. There is also a strong demand for high quality coking coal in the country for steel production.”

The highwall miner is quite a unique product. Over 50 highwall mining machines are still working in the US, but very few elsewhere – a handful in Australia and India and some locally made machines in China such as a machine similar to the ADDCAR design made by CCTEG which is working in the Ordos Basin coal mines in Inner Mongolia.

Banerjee comments: “Highwall mining improves the recovery at open cast coal mines by accessing seams from the pit highwall where access from surface is no longer possible, for example due to proximity to settlements.  In India there were two mines using highwall technology successfully and we always sensed there is good potential here due to the high population density and a lot of open pits with highwalls under which there remained large tonnage of coal reserves.”

In 2017 Gainwell approached Caterpillar saying that it had opportunities in India and would be interested in a technology licensing agreement given that new machine production had ended in the US. After a period of discussions this was signed in 2018 allowing the manufacture of highwall miners in India by Gainwell. The IP licensing included India and select overseas markets including China. Gainwell then invested in a new assembly shop in Asansol, near Kolkata in West Bengal in the heart of India’s coal mining belt, and made the first machine in 2019.

The two existing highwall miners in India had been supplied as follows: one by Bucyrus (SHM unit) in the early 2010s just before Bucyrus was bought by Cat in 2011 to SECL’s Sharda opencast mine (operated by contractor Cuprum Bagrodia Ltd or CBL) and the second in 2015/2016 to Tata Steel for its West Bokaro Division South Eastern Quarry. As that machine was supplied by Cat it was now known as an HWM300 and this too was operated by contractor CBL. 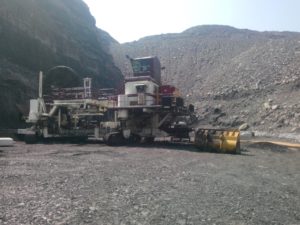 Gainwell supplied its first highwall miner to SECL through CBL during February 2019 and the machine performed very well. The customer in fact placed another order for second Gainwell Highwall Miner to be delivered in 2021. In fact, the customer will now have four highwall miners, one Bucryus, one Cat and two new units from Gainwell. At the same time, the other existing highwall miner user in India, Tata Steel, approached Gainwell wanting another machine which was duly delivered in October 2020. All the new Gainwell units have been given the name GHWM300. The Tata Steel unit has been successfully commissioned and went into coal production from end November onwards. Gainwell has brought lot of improvements on this machine including online diagnostics, complete operation through mobile application etc. and the machine has been performing very well. 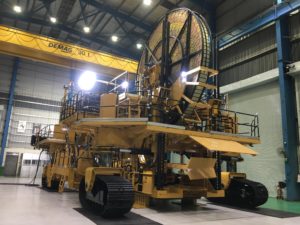 New GHWM300 made by Gainwell at its Asansol operation

Investment and evolution at Gainwell

As well investing in machining and other equipment, Gainwell has invested in a core design and engineering team at Asansol led by Jayanta Bhattacharya as well as employing on a consultancy basis several former Bucyrus/Caterpillar engineers who had worked on the SHM machines in the US. Bhattacharya told IM: “This really eased the manufacturing journey for us. We are primarily a Cat dealer, selling and servicing its equipment for the past 75 years. But we learned quickly and today we are quite self-sufficient. We buy the components and parts from Cat made by them and their network of third party suppliers which they are still making to support the installed population of highwall miners in the US.” 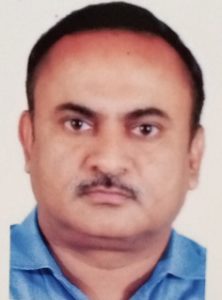 He adds: “Slowly we are trying to increase the indigenisation of the machine in India.  In the first machine, we had only about 7% Make-in-India content – by the second machine, this has risen to 28% and will be higher again for the third machine. Local manufacturing has really got strengthened in India in recent years with the growth of the domestic automobile industry and there are very good vendor base getting developed. All the testing of the equipment is also done in-house. Cat really helped us in the early days in handholding us but we are now becoming a world class manufacturer in our own right. Of course there have been challenges like finding right people with the requisite skill sets such as in niche electronics engineering but we were able to attract the right people and get them trained.” Gainwell’s Banerjee adds: “It is important to remember that the GHWM300 is a 300 t, complex machine costing up to $12 million including cutter module options so you can imagine the amount of engineering and componentry that goes into it.”

The new GHWM300 Highwall Miner delivered to Tata Steel in 2020

The company also pointed out that each highwall miner also has a high level of customisation depending on the options selected by the customer but also related to the seam thickness and geology it will be working with. Bhattacharya says: “As an example, the first machine was able to cut 0.9 m to 1.7 m seams.  The second machine had a high lift mode to deal with thicker seams – so it can handle seams of 0.9 to 2.5 m. Gainwell as a dealer and as a focused company is able to work with customers closely on their individual needs.”

For promotion in China, Gainwell has already attended a trade show in the country in 2020 and says it would already have had a machine in the country in 2020 if it were not for the effect of COVID-19. The company is working together with North China and Eastern Central Cat dealer Lei Shing Hong (LSH) Machinery and expects the first Chinese order to now come through in 2021. Banerjee says: “LSH will promote the equipment, as well as provide necessary service and parts support for the highwall miner. This is quite a unique arrangement between two major Cat dealers in two different countries with one acting as OEM and the other as a dealer. Gainwell is also in discussions with few other Cat dealers about similar arrangements to promote the Gainwell Highwall Miner in those respective markets.”

Gainwell says its Asansol site can make up to two highwall miners a year with the broad plan to supply one domestically and one for export on an annual basis. But if demand exceeds that, the company says that with three instead of two shifts and cutting down on some of the cycle times etc it could up this to three machines if needed. The assembly is modular and there is room at the site to expand the plant footprint as well. The company also says it will invest in 2021 in new machining equipment.

The growth of this Highwall Miner business within India is a real testament to Gainwell’s vision and confidence and as it involves manufacture of a high value, complex mining machine domestically and it has the full support of the Indian Government as well as from Coal India.