The Dow was last seen down roughly 13 points

Stocks gave back earlier gains this afternoon, as investors began taking profits on the ever-surging Big Tech space, with names such as Amazon (AMZN), Apple (AAPL), and Microsoft ((MSFT)) all slipping into the red. The Dow Jones Industrial Average (DJI) is down roughly 13 points at midday. Meanwhile, the S&P 500 Index (SPX) and Nasdaq Composite (IXIC) are both registering moderate losses, after earlier nabbing intraday highs. Wall Street is also gearing up for Federal Reserve Chairman Jerome Powell’s speech at The Economic Club of New York later today, which will give clues on the current state of the U.S. labor market. 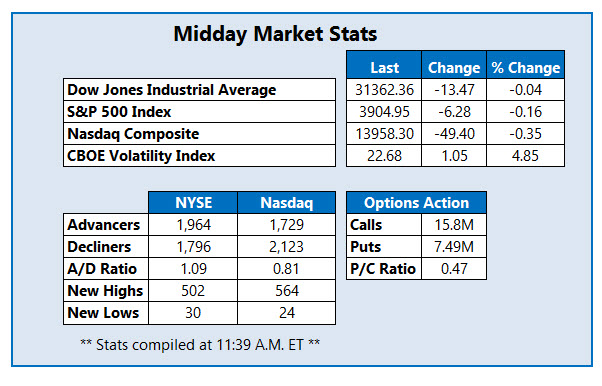 Marijuana producer Aurora Cannabis Inc (NYSE:ACB) is seeing an unusual surge in options activity today, just ahead of its fiscal second-quarter earnings report, which is due out after the close tomorrow, Feb. 11. So far, 145,000 calls and 32,000 puts have crossed the tape — twice the average intraday amount. Most popular is the March 20 call, followed by the weekly 2/12 20-strike call, with positions being opened at both. ACB was last seen up 12.5% at $17.56. The equity is eyeing its third-straight daily win, and earlier hit an eight-month high of $18.68. The security has tacked on 200.9% in the last nine months, with support from its 20- and 50-day moving averages guiding it higher. 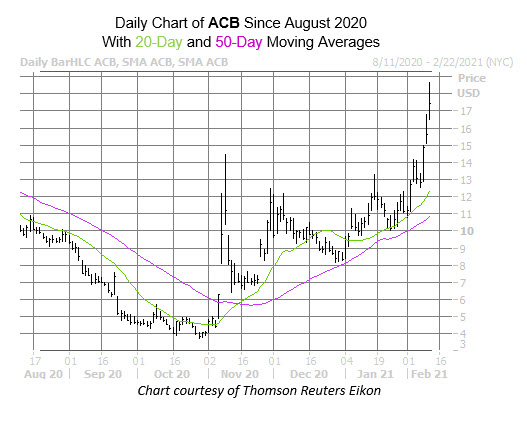 One of the best performing stocks on the Nasdaq this afternoon is Bio-Path Holdings Inc (NASDAQ:BPTH), which is up 305.5% at $21.09 at last check. The firm’s DNAbilize platform technology, which is used to treats different types of cancer, was just granted its third patent by the U.S. Patent and Trademark Office. The security hit a roughly two-year high of $24.34 earlier in the session, after breaking past pressure at the $5.50 and $6 area.

Investment management concern Diginex Ltd (NASDAQ:EQOS) is one of the weakest performers on the Nasdaq today. The equity is down 13.3% to trade at $19.30, tumbling from yesterday’s record high of $22.95. The stock has been quite volatile lately, though the 30-day moving average did capture its early February pullback, and looks ready to act as support for today’s tumble. EQOS is up 19.5% in 2021, though it should be mentioned that the equity landed on the short-sell restricted (SSR) list today.

SalesForce - Salesforce sticking with plans for 60-story Chicago skyscraper, despite telling workers they can ...