Coca Cola Setup Can Take The Stock Much Lower

Home » Coca Cola Setup Can Take The Stock Much Lower

Coca-Cola (NYSE🙂 needs no introduction. According to Fintech Zoom, excluding the top 5 big tech in the U.S., the beverage company has the most valuable brand in the world. Fame and recognition, however, don’t make a company immune to market declines.

In roughly a month during the 2020 COVID crash, Coca Cola stock fell from ~$60 to just over $36 a share. That 40% plunge, fortunately for the bulls, was followed by a recovery to nearly $55 by the end of the year. The stock closed at $49.15 yesterday. Is this a dip to buy or the start of another major selloff? 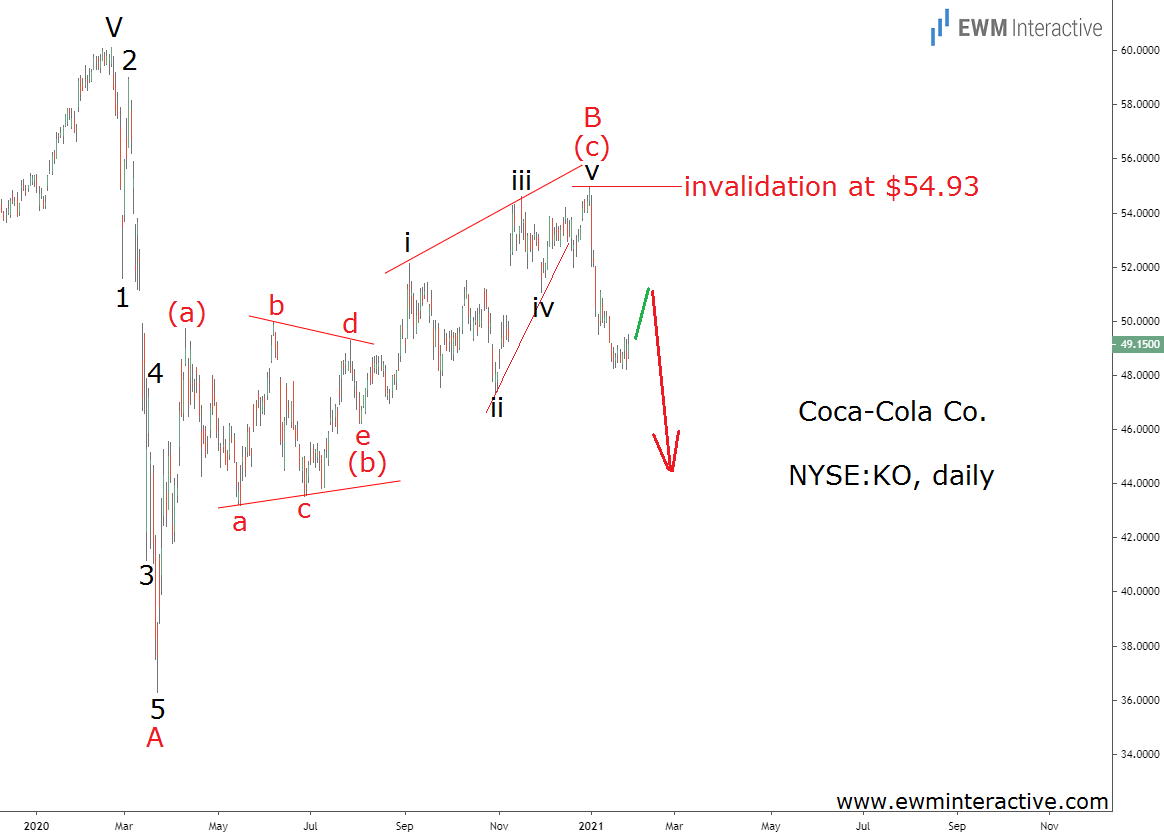 The daily chart above makes it possible to examine KO’s development from its $60.13 top from an Elliott Wave perspective. The sharp fall to $36.27 can be seen as a five-wave impulse, labeled 1-2-3-4-5 in wave A. The theory states that a three-wave correction follows every impulse.

That is exactly what we think had been in progress in the next nine months. The corrective rally in Coca Cola stock looks like a simple (a)-(b)-(c) zigzag, where wave (b) is a triangle and wave (c) – an ending diagonal. If this count is correct, the bearish reversal from $54.93 is the beginning of wave C down. C-waves usually breach the ending point of the corresponding wave A. This means bearish targets below $36 a share make sense as long as the top of wave B remains untouched.

Besides, the stock trades at a multiple to free cash flows of ~25. That would have been justified for a company growing at around 25% a year. Coca Cola’s FCF figure, however, has barely grown over the past five years. Elliott Wave aside, it makes a lot more sense for the price to go down rather than up from here. In our opinion, there are plenty of reasons to prepare for a drop to the low $30s in the months ahead.