It’s hard to find many chinks in the armor of Coca-Cola‘s (NYSE:KO) renowned dividend. The company has raised it for 59 consecutive years, and at current share prices, it delivers a yield of 3%, well above the S&P 500‘s average yield of 1.38%.

However, when you compare it as an income investment to a few of its fellow Dividend Aristocrats such as AbbVie (NYSE:ABBV), Kimberly-Clark (NYSE:KMB), and Chevron (NYSE:CVX), it fizzles out. Each of them boasts a better yield right now than the beverage giant, and each has a stronger record of payout raises over the past three years. I also see more room for their share prices to grow in the coming year.

1. Chevron is poised to bounce back

Last year was horrible for oil companies, but despite its lagging revenue, Chevron last month announced that it was raising its quarterly dividend by 4% to $1.34 per share, making this the 34th consecutive year that the company has hiked its payout. At Tuesday’s closing price of $106.70, the company’s dividend yield was 5.02%.

In the past three years, the company, which has worldwide upstream and downstream operations in oil and natural gas, has increased its dividend by 19.64%, more than double Coca-Cola’s 7.69% payout growth over that period.

Chevron’s Q1 earnings were still down by 47% year over year, but with earnings of $1.37 billion, it was the first quarter since before the pandemic that the company recorded a profit. Its cash flow remained strong at $4.2 billion, down from $4.7 billion a year ago. With the price of crude now around $64 a barrel, more than $40 above where it was a year ago, this looks like a good time to jump in on the stock before it takes off.

Despite the company’s sluggish 2020 results, its share price is up by more than 17% over the past year. Chevron’s most promising news from last quarter was regarding its upstream operations (the exploration and production of crude oil and natural gas). For that business, the company reported earnings of $941 million compared to $241 million in the same quarter in 2020. 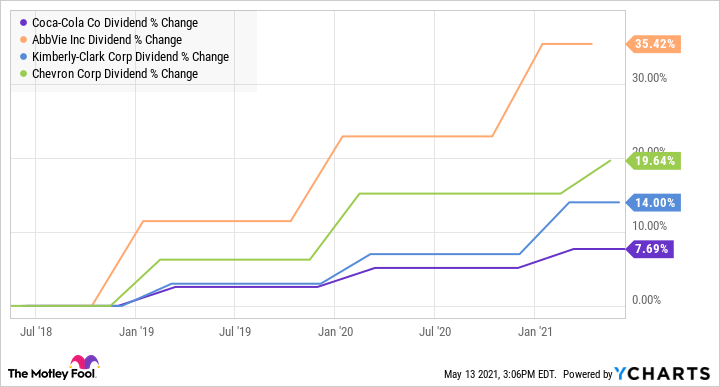 2. Kimberly-Clark’s dividend is on a roll

Consumer goods giant Kimberly-Clark is best-known for brands such as Kleenex tissues, Huggies diapers, and Scott toilet paper. People stocked up on items like those early in the pandemic in surges of panic buying that boosted the company’s bottom line then, but as a result, its first-quarter 2021 numbers look low by comparison.

The company posted sales of $4.7 billion in the quarter, down 5% year over year. Net income fell 12% to $584 million. However, if you compare the recently reported quarter to the same period of 2019, it becomes obvious that 2020’s numbers were the outliers. In Q1 2019, the company posted $4.6 million in sales, while net income was $454 million, 28% lower than this year’s first quarter.

Kimberly-Clark’s forecast for the rest of the year is conservative. Management predicts net sales will grow by 3% to 5%, down from an earlier estimate of 4% to 6%. It also said it expects organic sales growth of between 0% and 1%, compared to a prior prediction for growth in the 1% to 2% range.

The stock has only risen 1% over the past three months, so if you’re looking for booming share price growth, Kimberly Clark isn’t for you. But if you want a solid, well-covered dividend, you’ve come to the right place. The company raised its quarterly payout by 6.5% to $1.14 per share this year, making 2021 its 49th consecutive year of dividend hikes. At Tuesday’s stock price, that dividend yields 3.40%.

Over the past three years, Kimberly Clark has raised its dividend by a solid 14%, and with a cash dividend payout ratio of 66.56% (TTM), it has plenty of room to keep boosting it.

3. AbbVie is looking past the Humira patent cliff

Pharmaceutical company AbbVie has a dividend with a yield of 4.53% at Tuesday’s share price. And for its first payment of 2021, it raised its quarterly payout by 10.5% to $1.30 per share. Because it was part of Abbott Laboratories until 2013, it is considered a Dividend Aristocrat with 49 consecutive years of dividend increases. But even if you restrict yourself to counting only from the point at which it was spun off, it has an impressive payout history. AbbVie has raised its dividend by 225% since it hit the market, and over the past three years alone, has raised it by 35.42%.

Many investors are concerned about how the company will fare after its key blockbuster drug, Humira, loses patent protection in 2023, but for now, the popular immunosuppressive continues to rake it in, with $4.8 billion in revenue in the first quarter. However, there are plenty of other profitable drugs in its catalog: AbbVie reported $13 billion in revenue in Q1, up 51% year over year.

Humira may still be the company’s biggest earner, but in their first years on the market, two of its other immunology drugs, Skyrizi and Rinvoq, brought in revenues of $574 million and $303 million, respectively. Thanks to the company’s purchase of Allergan, it also has a cash cow in Botox: Botox therapeutic booked $532 million in revenue in the first quarter while Botox cosmetic brought in $477 million.

Even with the looming sales decline for Humira after generic versions hit the market, between the company’s current catalog and the potential of the candidates in its pipeline, it should keep pulling in the cash. And for now, AbbVie’s dividend is the best-covered of the three discussed here, with a 46.52% cash payout ratio (TTM). The stock is up by more than 9% this year.

All three of these stocks have better dividend yields than Coca-Cola, and better recent records of payout increases.

However, the one that stands out to me is AbbVie. It has the best forward price-to-earnings (P/E) ratio of the group at 9., which indicates that the long-term concerns about Humira’s sales decline have been largely priced into the stock. Meanwhile, the company has delivered double-digit percentage dividend hikes for two years running. Chevron also provides a great opportunity, with recent trends pointing toward a rise in oil prices that will help the company and the stock.

Kimberly Clark will no doubt cover its dividend as well, considering its strong cash flow, but it will be hard for the company to match last year’s sales, and that could hurt its share price.