PRIOR to the epochal Indian economic reforms of 1991, banking in India, like other aspects of the economy, was a tightly regulated industry with dismal growth and limited impact. Unlike today, the lending, deposit and the exchange rates were dictated by the banking regulator —The Reserve Bank of India. There were negligible prescribed norms for recognition and treatment of bad loans and no set requirements for the capital adequacy norms either. To approve a high-value loan or open a branch, a bank had to seek RBI’s permission and it would normally take months together for the approval. Moreover, the kind of financial marketplace that India has currently, was nonexistent.

Given the central role played by banking in the present day economic systems, the liberalization also involved changing the paradigm of the Indian banking to align it with the demands of the newly adopted laissez faire form of economy. By the time C Rangarajan retired as RBI Governor in 1997 after serving for almost 6 crucial years of transformation, Indian banking space was buzzing with competition. Credit growth in the form of corporate as well as in segments like car and housing loans had taken off and banking inclusion was accelerating at an impressive pace.

While banking in Indian mainland was expanding in leaps and bounds, J & K’s banking space was undergoing a unique transformation. The widespread insurgency in the region in the first half of 90s forced many nationalized banks to wind up their operations in sensitive areas leading to retrenchment of banking penetration instead of expansion. This lead to rapid migration of deposits to GoJK owned bank – The Jammu and Kashmir Bank. Despite early impediments and a small base of 810 banking branches and offices in 1996-97, the penetration of banking in J & K, has over a period of time gained momentum and reached some of the most remote areas of the region. The banking network in J & K has registered a compound annual growth rate (CAGR) of 3.6% in the last 24 years to reach a milestone of 1815 banking branches and offices in FY 2019-20. However, the lag of 90s is still reflecting as the banking network at all India level grew much rapidly at 4% during the same period of 24 years. (CAGR measure the annual growth rate over time, with the effect of compounding taken into account.)

Continuing with the endeavor of outlining the changes in J & K Economy since 1996-97, this column shall analyze the movement of growth in bank deposits, bank loans and loan defaults. The movement of these variables and the changes in the composition of credit in terms of agricultural loans, industrial loans and personal loans will help us in understanding the health of the economy during various time periods in the last 24 years.

Like in Part-II of the series, in this analysis again, time frame has been segregated into 4 segments of six years. It has been aligned with the changes in political representatives holding the highest Govt. offices because economic policies like tax structure and spending priorities tend to change every time a new dispensation takes over. These in turn have an impact on savings and credit appetite of an economy.

Thank you for connecting with us. We will respond to you shortly.

BE PART OF QUALITY JOURNALISM

Banking system catalyses the growth of an economy by creating an efficient mechanism of aggregating scattered and unutilized savings in the economy and routing it to capital forming entities which in the process help in creating income, jobs, widen tax-base and accelerate overall economic growth. Therefore, the growth or contraction in bank credit does reflect the pulse of the economic health of a region.

The growth in the four time frames have followed a descending pattern with six years of the fourth time frame i.e. FY 2014-15 to FY 2019-20 registering a very dismal show at an average annual growth of only 12.29%. The last FY in the fourth time frame i.e. 2019-20 in particular at only 5.82 % against all India average of 10.87% credit growth per annum, is clearly reflecting the deep stress that J & K’s economy is in. Although, the saturation of credit absorption capacity over time does play an important role, but when compared with all India averages, this looks like a J & K specific ailment for sure.

Another indicator which helps in analyzing the proportional growth of credit vis-à-vis J & K’s GSDP is the bank credit to GSDP ratio. This indicator also reflects the efficiency of the financial system. To put things into perspective, this ratio for some advanced economies even exceeds 200%. For J & K, in FY 1996-97 the ratio stood at 13.80% and after 24 years it has reached around an acceptable level 40% in FY 2019-20. Although, this clearly depicts the gradual formalization of economy and subsequent expansion of credit but J & K is still lagging behind the national average by a fair margin which stands at around 50%.

Where is all this credit getting routed?

Another interesting aspect to analyze will be change in the composition of credit over a period of 24 years. In line with the observations regarding stagnating industries and expanding services sector, the pattern of change in credit compliments the fact in a synchronous fashion.

From a share of 26% in total credit portfolio of the banks lending in J & K in FY 1996-97, to only 15% in FY 2019-20, the share of loans extended towards industrial development has not been able to match the pace of personal and other service sector loan segments and also to some extent the agricultural sector.

So far as growth is concerned, Industrial credit has remained an outright laggard at a CAGR of only 15.75% for the past 24 years. Personal loan segment comprising of housing loans, car, two wheeler & other vehicle loans, education loans, consumer durable loans and credit cards has driven the overall credit growth story of the region. It has been growing at an impressive compound annual growth rate of 25.59%. However, the share of housing loan segment in the personal segment pie has come down from 39% to mere 23%in last decade alone. Housing segment, which is very good for the economic development is moving less rapidly than other junk segments like credit cards. 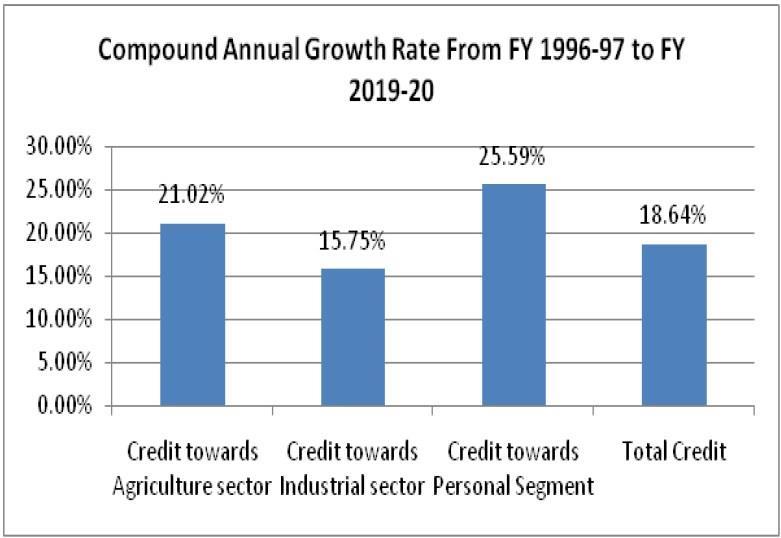 Another aspect from banking which helps us in determining the pulse of the economy is the movement of deposit growth. Although, factors like interest rates and return on asset classes like equities, gold and real estate do influence the movement of deposits, however, the sensitivity of its growth is more dependent upon the change in people’s disposable income. In Keynesian economic theory, there is a direct relationship between peoples’ income, consumption and savings. The bank deposit growth rate therefore provides an insight about the change in people’s income, assuming saving & consumption rate as constant. 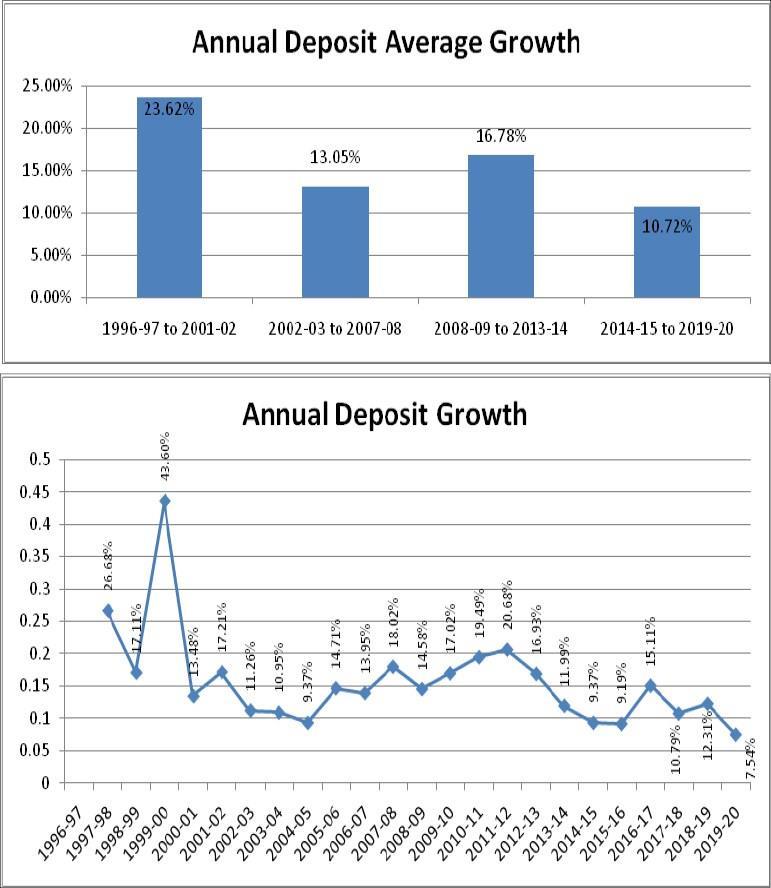 loan defaults-technically known as Non-Performing assets (NPAs) when looked at a macro level helps in understanding the health of any economy. At micro level it reflects the borrower’s inability to repay their loans which can be very business specific like poor business idea or totally systemic in nature like the floods of 2014 or the political disruption of August 2014. The spike or slump in NPA numbers reflects the changes in overall economic conditions of a region. It is a matter of fact that the repayment record of borrowers based in J & K is far better despite the economically hostile environments within which they have to operate. The fact can be backed by the impressive recovery record of restructured assets by the banks in J & K after 2014 floods and 2016 unrest. It’s so far the best in the industry. Similar arrangements of restructuring allowed by RBI, like the one Uttrakhand was given after cloud burst in 2013, resulted in much stressed recovery numbers compared to J & K. The rise in NPA numbers have mostly been influenced by factors outside borrowers’ control-the systemic ones.

The inferences drawn from the performance of advances, deposits and NPAs in the last 24 years of J & K economy reflect a pattern of decelerating economy with plummeting savings, unhealthy composition of credit and rising levels of failed businesses. The last 6 years have been one of the worst periods in terms of credit growth since financial year 1996-97. Whatever expansion of credit has happened, it has been driven by personal loans. The deployment of credit towards industrial development has shrunk drastically. Unlike credit towards productive capital assets which have a direct bearing on improving the output of the economy, unabated rise in personal credit is considered unhealthy as most of it gets directly dumped into consumption. Since most of the consumable items like cars and consumer durables are manufactured outside J & K, the benefits of this credit are skimmed by the outside manufacturers rather than catalyzing the local economic development. Housing & education sectors are the only economically as well as socially healthy sectors in the personal segment which deserve to be promoted. Both these segments have suffered severe contraction.

On the other hand the growth in deposits is reflecting a severe contraction in the household disposable income with FY 2019-20 registering slowest annual deposit growth in the last 24 years. This drag is affecting household risk bearing capacities, consumption budgets and investment appetite. All these factors are lethal for the health of an ailing economy. Besides credit and deposits, there has been an exponential growth in the loan defaults in the last few years. This showcases the speed with which businesses are failing. Moreover, its subsequent squeeze on the lending capacities of the banking companies is only catalyzing the problem. This creates a cold foot attitude of the banks on account of bleeding balance sheets, which in turn chokes the funding space for otherwise economically viable business ventures resulting in an unaffordable delayed recovery. The overall trend in these essential variables is painting a very grim picture. We can only hope that we have bottomed out the trough of this economic slump and the only direction that we move from here grabs the ascent of the cycle towards a much needed economic revival.

Data has been taken from Reserve Bank of India website, various economic surveys and state budgets. In case of conflicting data points, RBI’s data has been given preference