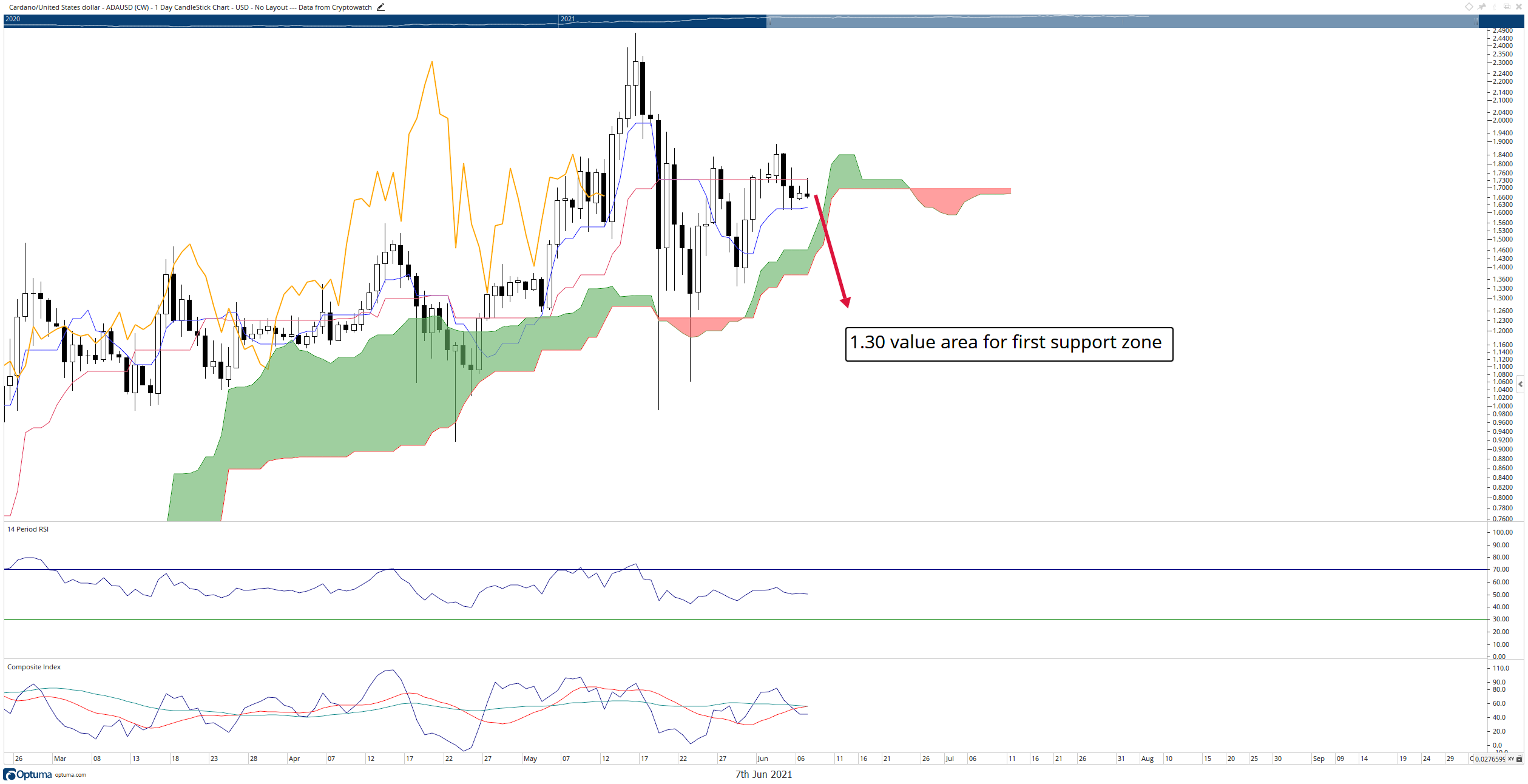 Cardano’s daily Ichimoku chart above shows some very concerning behavior for anyone remaining bullish in the short term. At the time of writing this article, Cardano is trading below the Kijun-Sen and if it remains so at the end of the day, this will be the fourth consecutive day below the Kijun-Sen. Consequently, Cardano has been trading between the Kijun-Sen and Tenkan-Sen. The most concerning piece of analysis concerning an impending move lower is where the Chikou Span is at. I’ve repeatedly written that in order to maintain an overwhelmingly bullish outlook on the daily chart, the Chikou Span must remain above the candlesticks. Monday (today, June 7th, 2021) is the day that may decide whether we explode higher or experience a big sell off. Why? Because Cardano has to shift form closing above 1.76 to keep the Chikou Span above the candlesticks to 1.94. By the end of the week, Cardano’s daily Ichimoku chart will be in one of the tightest congestion zones its been in since 2018. The Kijun-Sen, Tenkan-Sen, Senkou Span A, and Senkou Span B will all be within a couple ticks of one another. That kind of consolidation creates a squeeze like event and has the ability to explode Cardano in any direction. Guidance for whether that move will be higher or lower is hard to tell on just the daily chart: both the RSI and the Composite Index show extremely neutral conditions. The weekly chart (not shown) the RSI is still above 60, so the move lower is very likely. I am looking at the weekly chart’s RSI To help identify when support could be found. Near term support should be around the 1.30 value area, but it’s not hard for bears to push Cardano to the 0.84 – 0.94 level. 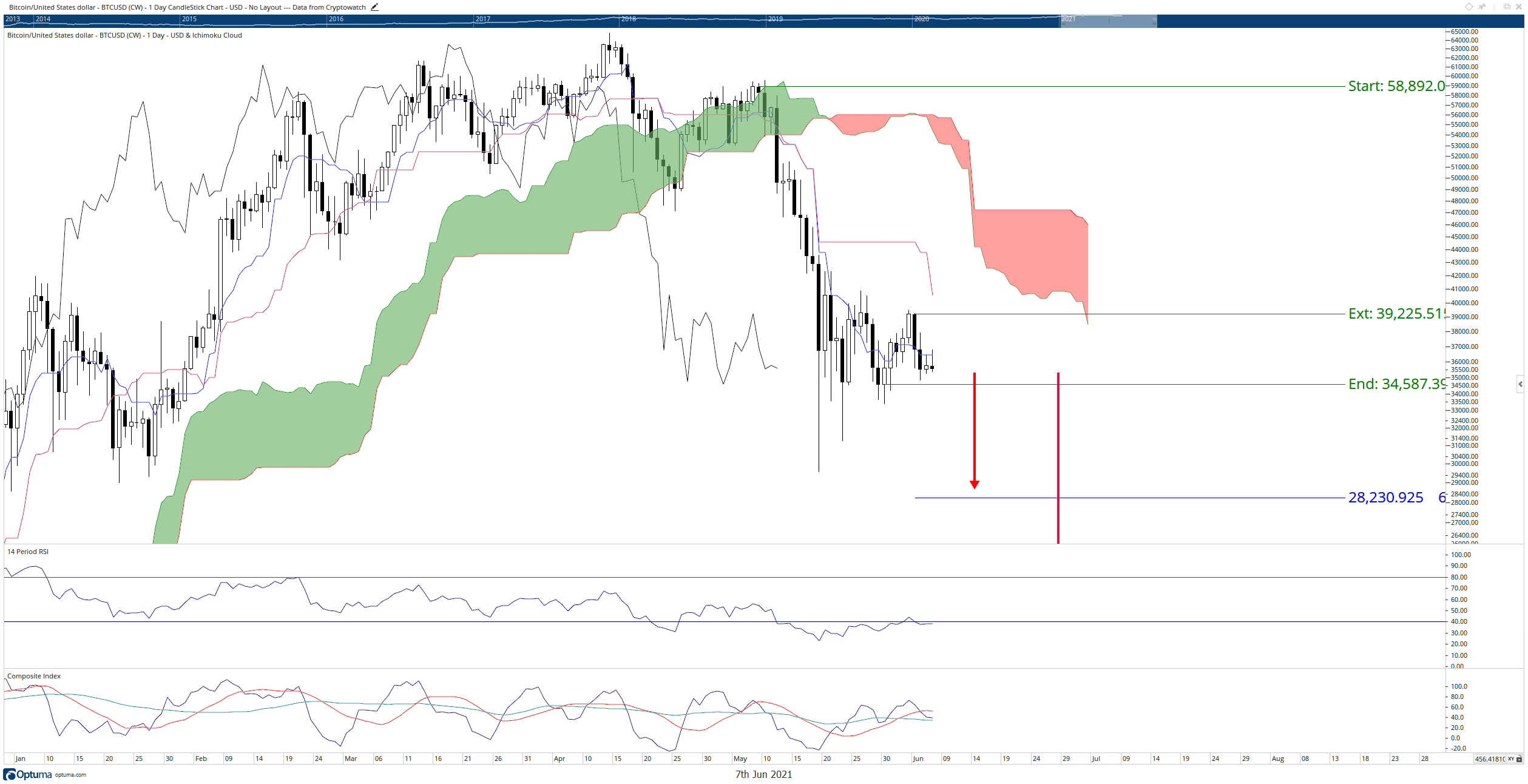 Bitcoin is a leader in every respect – including moves lower. Much of the alt-coin market remains in a somewhat neutral condition. Many altcoins have yet to show as clear a bearish condition as Bitcoin’s chart – but their time is coming. Bitcoin’s move lower isn’t done yet. The consolidation that has existed on Bitcoin’s daily chart sine May 20th may finally be coming to a end – and probably a violent one at that. Every single condition you would want to see for a bearish environment in the Ichimoku system is present on Bitcoin’s daily Ichimoku chart: Future Span A below Future Span B, Current Span A below Current Span B, Tenkan-Sen below the Kumo, Kijun-Sen below the Kumo, Tenkan-Sen below the Kijun-Sen, Chikou Span below the Kumo and candlesticks, and finally: price is below the Tenkan-Sen. The bearish pennant present on Bitcoin’s chart is under threat of being broken lower. A strong close below 33,250 will likely trigger a move to test the 61.8% Fibonacci Retracement level at 28,230 and then the 61.8% Fibonacci Extension at 23,037. The RSI appears to confirm any further dip lower by being rejected against the final oversold level at 40. Adding to the weight of a sustained move lower is the Composite Index crossing below its fast average, and it is not close to crossing above its slow average. Be vigilant for any flash crash and recovery move!

ADA price – Here is why cryptocurrencies are rising now