ADA/USD has crept higher the past couple of days as volatility remains a feature, and bullish activity continues to percolate.

ADA/USD continues to deliver plenty of volatility for speculators within a rather interesting technical range.  After achieving record highs in the second week of April, ADA/USD has seen some profit-taking certainly exhibited, but the ability of Cardano to create a rather comfortable support level could prove constructive for speculators. On the 20th of April, ADA/USD traded near a low of approximately 1.120000, but the digital currency was able to sustain this support juncture and has produced a solid run higher the past two days.

The broad cryptocurrency market has shown signs of stability too, which may help bolster sentiment and the ultimate decision of traders who believe that technical charts remain bullish. As of this writing, ADA/USD is trading near the 1.225000 mark and seeing quick price action, but curiously, a short-term support level near the 1.200000 appears to look strong and the 1.180000 juncture below proved quite durable earlier.

If ADA/USD continues to show that speculative buying fever persists, speculators are likely to start eyeing higher targets seen only a couple of days ago. After touching lows on the 20th of April early in the day, ADA/USD did jump higher and it tested the 1.286000 mark. Volatility remains a key ingredient while trading ADA/USD, and speculators should understand that potential profit-taking near highs could affect price action. However, Cardano has seen higher values and, if bullish sentiment remains strong and grows, speculators may believe that ADA/USD could see its value challenge a higher price band.

An important feature of trading within a speculative asset like ADA/USD is to be aggressive, but to also not get too greedy.  Choosing selected take-profit junctures and cashing out of winning positions is crucial, because profits can vanish quickly when reversals hit the marketplace. Technically, ADA/USD continues to look like it may produce speculative bullish momentum. The resistance juncture near the 1.242500 mark could prove important short term; if it is punctured higher, then traders may believe a test of the 1.260000 could develop rapidly.

ADA/USD moves fast and limit orders are essential while trading Cardano to make sure your price fills in line with your expectations.  Short-term technical sentiment appears to remain exuberant and buyers cannot be faulted for pursuing additional gains from ADA/USD. However, reversals are a key element within ADA/USD too, so traders need to use a wise amount of leverage to make sure volatility does not blow them out of a trade if things go wrong. 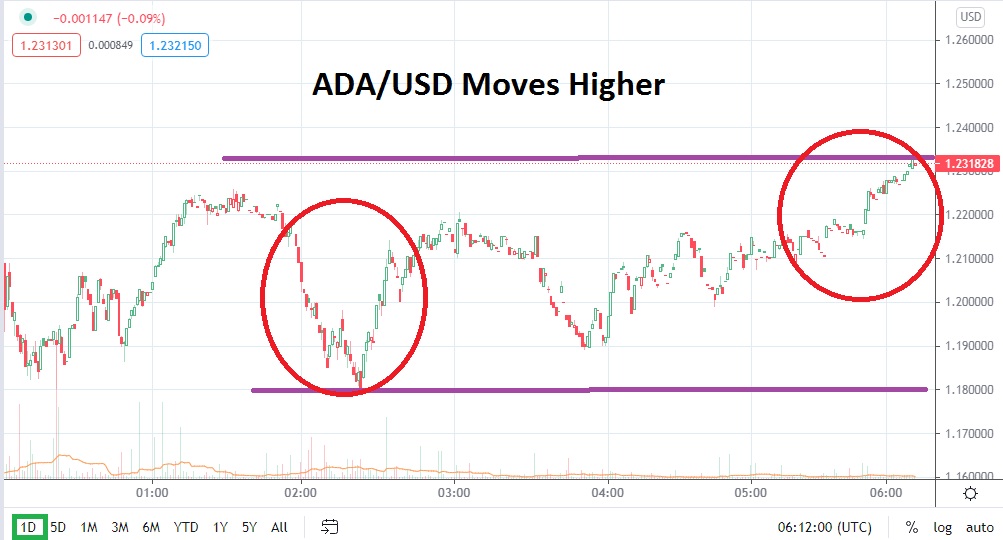 Dogecoin – Reddit Penny Stocks To Watch As Dogecoin Goes To The Moon, Literally

Tron – TRON Cryptocurrency Rises By 39% In The Last 14 Days

XLM price – THIS is when Cardano (ADA) price will reach 3$