DOGE/USD has risen in value the past week as speculative values have created tests of mid-term highs and the cryptocurrency proves sustainable.

DOGE/USD has done well the past week of trading and has challenged mid-term resistance, which may translate into more speculative opportunities for the cryptocurrency. As of this morning, DOGE/USD is above the important six cents mark and, if the value remains above this juncture, it may set off another wave of optimistic buying from its enthusiasts. The broad cryptocurrency market remains exuberant and the ability of DOGE/USD to also display rather solid support levels throughout the month of March adds to its allure.

DOGE/USD remains a speculative asset and its volatility is clear for all technical traders. In late night trading, the cryptocurrency touched value near six and seven/tenths cents which flirted solidly with prices from the 1st of April, and surpassed values traded in March. Since reaching the higher values late last night and early today, DOGE/USD has reversed lower but it remains above six cents and this is important. The capability of Dogecoin to produce moves which demonstrate a change of value of almost ten percent in a time span of less than a day is a feature that speculators drawn to fast-moving assets like to embrace.

DOGE/USD should be watched at its current values because the test of resistance may prove to be a touchstone and the price of six and seven/tenths cents looks to be an inflection point now for potential moves above this level. Yes, DOGE/USD could reverse lower, and support which was seen only a handful of days ago slightly above five-and-a-half cents may be seen, but within the context of speculative buying building within cryptocurrencies, wagering against the bullish trend may prove to be costly.

Speculators certainly need to use limit orders when trading Dogecoin because of its rampant characteristic of moving fast. However, support levels have proven comfortable the past week and can be used as stop loss ratios when factoring technical charts. Using marks slightly below the six cents value as a stop loss order may be appropriate depending on the amount of leverage being used by the trader.

Traders should look for slight pullbacks in DOGE/USD and contemplate buying positions of the cryptocurrency. Yes, short-term sentiment can change in a second within the digital currency world, but sentiment for the time being points to a speculative buying landscape and traders may feel inclined to try and participate in the current conditions with wagers on bullish trajectories to remain stubborn. 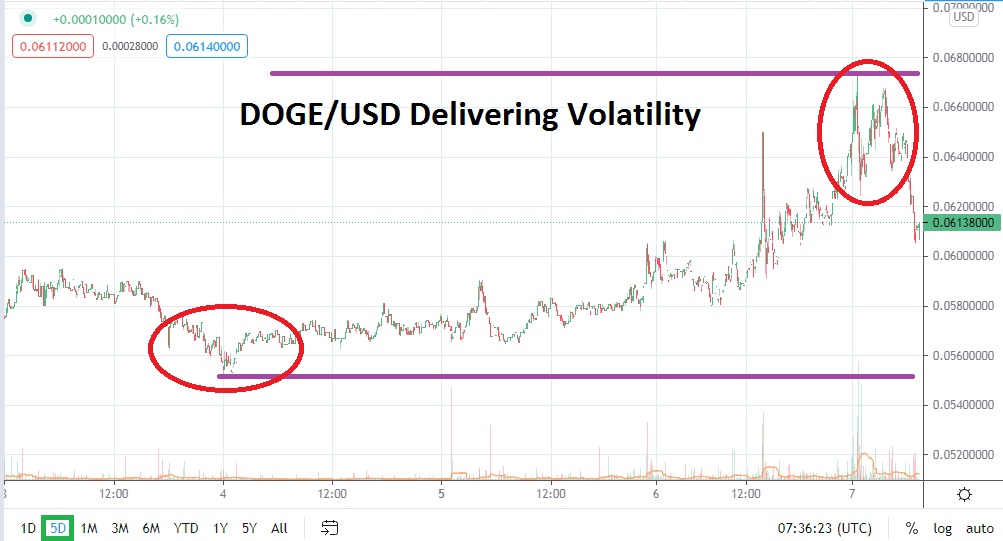 Visa – Visa Stock: Is It A Dividend Stock To Watch?

Visa - Visa Stock: Is It A Dividend Stock To Watch?