As of this writing, ETH/USD is trading slightly below the 3300.00 level which may be viewed as a rather nervous intersection for the cryptocurrency near term.

After traversing near the 4000.00 mark only ten days ago and causing speculators to think about the value summit climbed in May, ETH/USD has demonstrated an ability to drift lower in value. The rather swift fall in prices should not come as a major surprise to speculators. Even if a trader has visions of glorious new heights via Ethereum, if they are a student of the cryptocurrency market they must acknowledge that rather wild reversals downward that are a frequent part of the landscape.

Technically, ETH/USD has enjoyed a very solid bullish run since the third week in July, after the broad cryptocurrency market began to dust off the pain from a rather steep decline in values which was exhibited from the middle of May until about the 20th of July.  In the past ten days of trading, ETH/USD has managed to see a high of nearly 4025.00 on the 3rd of September, and a low of almost 3010.00 on the 7th of September.

While ETH/USD is certainly trading above the lows seen nearly a week ago, that lower depth was hit with what can be described as a flash crash. Technically, the ability to trade above this mark is not that impressive, and in fact may be a troubling warning regarding the support levels bearish speculators may try to target if they believe further weakness in ETH/USD will become pronounced.

ETH/USD is in a rather intriguing and perhaps dangerous trading landscape as this week gets started. Technically, ETH/USD ‘needs’ to be able to penetrate the 3300.00 juncture and sustain values above to help motivate buyers who believe a reversal higher will pick up momentum and the bullish trend seen since late July will be reignited.

However, if ETH/USD is not able to sustain its current price and begins to challenge support near the 3250.00 ratio and then sinks towards the 3215.00 mark, sellers may become convinced that now is the right time to target lower junctures. Short-term traders need to use their risk-taking tactics wisely. Sentiment within the broad cryptocurrency is showing signs of nervousness as speculators wonder if the downturn in evidence the past week will continue. Traders who believe that technically ETH/USD will have additional room to move downward, may want to be sellers around the 3290.00 to 3275.00 levels and place take profits near current support. 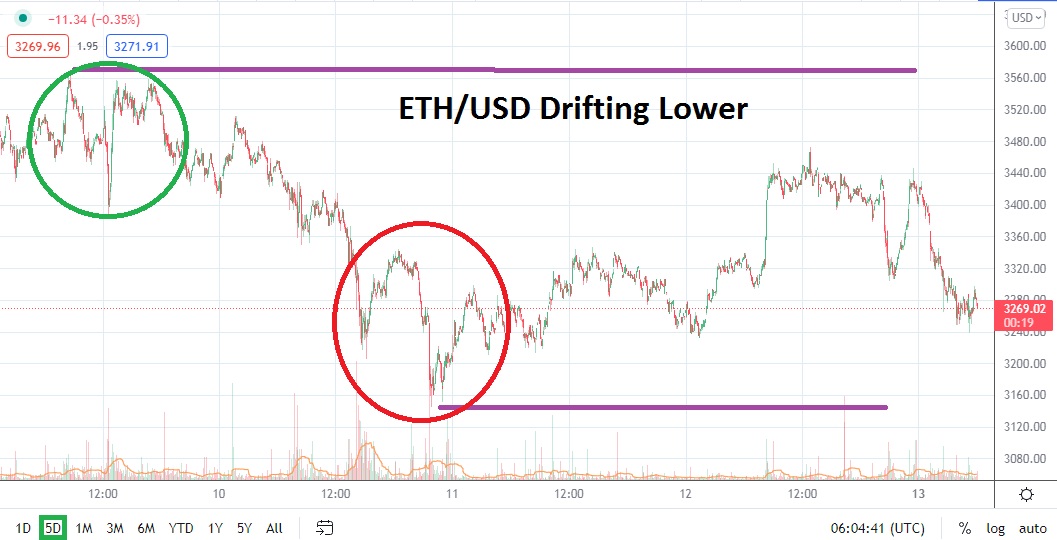