Home » Is DOGE On The Decline?

The Dogecoin price has received a bit of a setback over the past 24 hours with the expected rise not materializing. IN fact, the dog themed meme cryptocurrency descended slightly by around 3.5% over the past 24 hours to settle once again at the $0.195-$0.198 levels. DOGE has been the only Top 10 coin to remain basically stuck in a rut since the July 21 recovery and the short-term prospects do not look good.

It seems that the Dogecoin price has not benefited that much from Elon Musk’s tweets of late although the billionaire has been slightly muted. Baby Dogecoin seems to have been a flash in the pan with not much hype going on in that sector either. If you haven’t bought some Dogecoin yet, take a look at This How To Buy DOGE Beginner’s Guide.

Short Term Forecast For Dogecoin price, A Slow Descent Or A Rebound 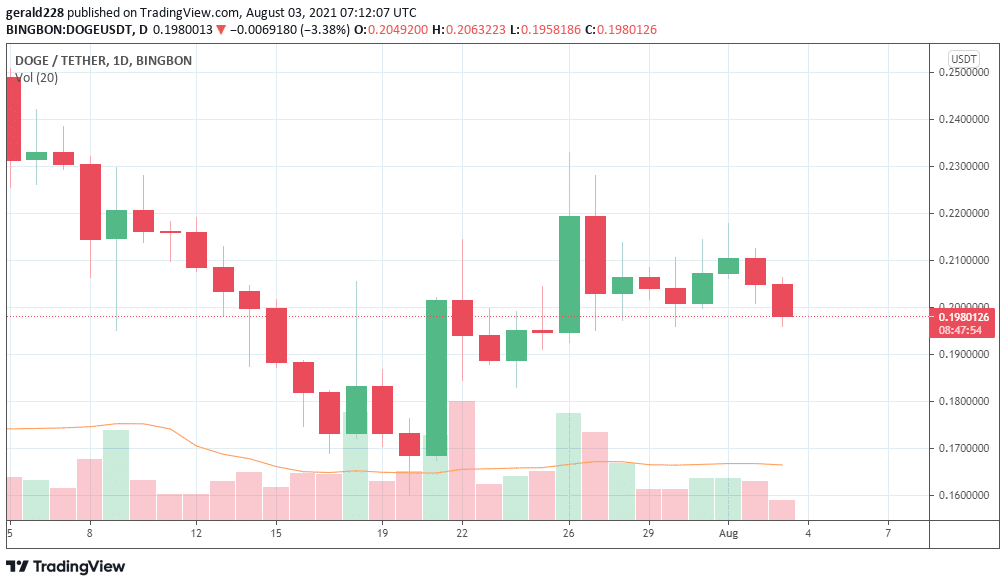 The Dogecoin price appears to be stuck in between the $0.22 and $0.195 range and there is very little movement either way. At present, the $0.19 support level appears to be holding strong although a sell off could even take the price down to the $0.15 level.

A bearish outlook seems to be shaping up for Doge with a slow descent now on the cards. Buyers seem to have deserted the market and there is little appetite for a push upwards. Although there was some hope last week of a rise in price, this was quickly dispelled by bearish activity over the weekend after a jump in the Dogecoin price.

Some analysts were predicting a jump to the $0.30 level for DOGE, but that did not happen. The dip in the Bitcoin price could also have had an effect in crypto market sentiment with Dogecoin certainly not an exception.

A bullish thesis could still materialise with the Dogecoin price rising to the $0.235 level which is the July 26 high and following on to the $0.25 mark. This would represent a 15% increase from the current price although at this point, this price movement does not look too likely.

Elon Musk’s tweets that Dogecoin Is Money seems to have fallen flat with his influence continuing to wane as time goes by. If you haven’t yet bought some crypto take a look at these Top Cryptocurrency Brokers.

The Dogecoin price appears primed for a move downwards in the short term but the long-term outlook is still bullish. Notwithstanding the rather dim mood in the markets lately, a recovery seems to be on the cards especially if the Bitcoin price recovers.

The Dogecoin price needs to recover the $0.20 sooner rather than later if it wants to continue progressing forward. A target of $0.30 is not totally unrealistic by the end of September.

Looking to buy or trade Dogecoin now? Invest at eToro!

Get the 5 most predictable currency
pairs

Marvell Technology Agrees to Buy Innovium for $1.1 Billion. What to Know.

Marvell Technology Agrees to Buy Innovium for $1.1 Billion. What to Know.

Satoshi Nakamoto Collaborator Says His Bitcoin Fork, Zcash, Should Go Proof Of Stake And Wind Down Its Carbon Footprint