Get the Forex Forecast using fundamentals, sentiment, and technical positions analyses for major pairs for the week of April 12, 2021 here.

The difference between success and failure in Forex trading is very likely to depend mostly upon which currency pairs you choose to trade each week and in which direction, and not on the exact trading methods you might use to determine trade entries and exits.

When starting the trading week, it is a good idea to look at the big picture of what is developing in the market as a whole and how such developments and affected by macro fundamentals and market sentiment.

It is a good time to be trading markets right now, as there are a few valid long-term trends left in favor of the U.S. dollar against the Japanese yen, while U.S. and European stock markets are also strong with the major indices closing last week at all-time high prices.

The headline takeaway from last week is that market sentiment is risk-on. Demand has been stoked by dovish monetary policy plus stimulus in the U.S., despite fears that policy will lead to untenable inflationary pressures. The week ended with the major U.S. stock index, the S&P 500, closing at an all-time high price of 4128.80 – the second consecutive weekly close above 4000. European stock markets also hit record highs, with the DAX Index also ending the week at another record high. Global stock markets were generally higher over the week.

The U.S. dollar fell somewhat over the past week after running into technical resistance, making currency crosses the main market drivers. The euro and Swiss franc showed some bullish momentum while the Japanese yen remained weak. The bullish momentum was driven mainly by analysts seeing a much stronger recovery in the Eurozone than had been expected due to the ongoing persistence of the coronavirus epidemic there, upgrading corporate earnings forecasts. Money has been flowing into euros to invest in European stock markets. Late Friday, the President of the ECB committed to potentially expanding its bond purchase program (if necessary) beyond March 2022 when it is scheduled to end, with Lagarde saying the Eurozone will see a strong economic rebound during the second half of 2021.

The main data event last week was the release of the FOMC’s meeting minutes, which had little impact. The coming week will see the release of U.S. CPI (inflation) and retail sales data, plus the RBNZ rate statement and Chinese GDP numbers.

Last week saw the global number of confirmed new coronavirus cases rise for the sixth consecutive week after falling for over two months, driven mainly by a resurgence of the virus in Europe and Latin America (especially Brazil). The total number of global deaths also rose again last week for the third week running.

Many countries have begun vaccination programs. Excepting extremely small nations, the fastest progress towards herd immunity has taken place in Israel, the UK. and the U.A.E. with one study claiming that Israel is the first country to reach de facto “herd immunity” and another claiming the UK. will reach herd immunity next Friday. Immunization is proceeding relatively quickly in the U.S. and the UK. but is going slowly in the European Union, where only a single member state has inoculated more than 20% of its population (Hungary).

The weekly price chart below shows the U.S. Dollar index printed a weakly bearish small near-pin engulfing candlestick last week which followed a near-pin candlestick from the week before. The consolidation of the past few weeks appears to have ended, with the dollar showing a bearish reversal from the key resistance level identified at 11900. The index is above its price from three months ago, which is a bullish sign, but is still below the key resistance level mentioned as well as sitting below its price from six months ago, suggesting that the upwards movement may be capped over the near term. Overall, next week’s price movement in the U.S. dollar looks uncertain. For this reason, it will probably be wise to wait for the index to be established above 11900 before taking any long USD trades over the coming week. 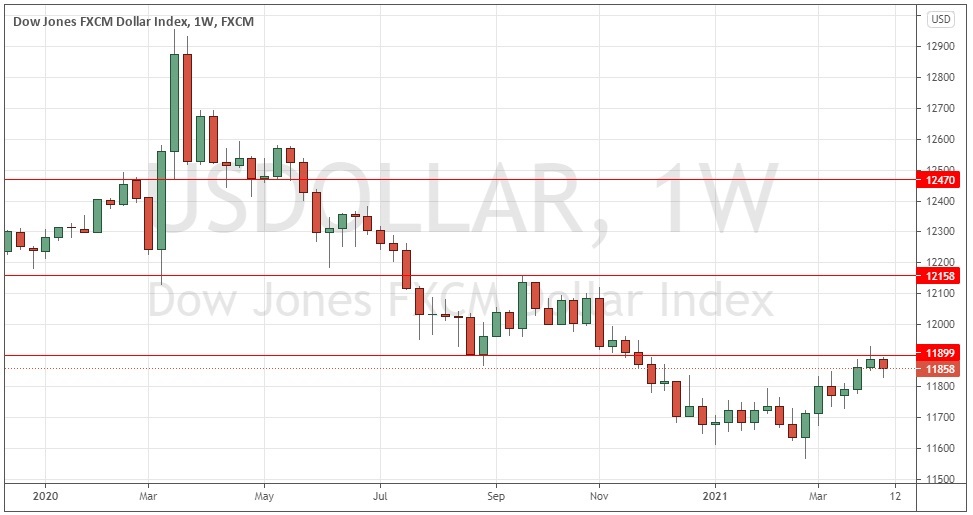 The incredible rise of the U.S. stock market since the initial impact of the coronavirus in March 2020 continues, with the price powering up last week to close right on yet another all-time high. An additional bullish factor is that the closing price was well above the big round number and psychological level at 4000. The price is in blue sky with bullish momentum, and the volatility is healthy enough to suggest the rise is likely to continue for some days. 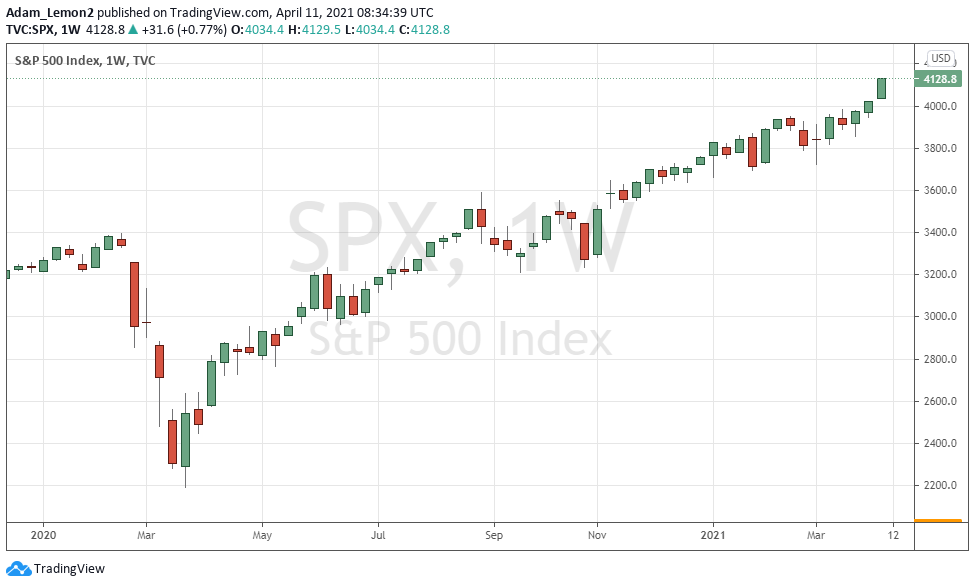 Although the pace of Bitcoin’s incredible and exponential rise to new record highs has slowed in the past few weeks, traders and investors last week pushed the cryptocurrency up and it is now trading very close to its record high near $61,000 after printing another bullish weekly candle. This bullish price action suggests a new bullish breakout beyond that high is increasingly likely to happen over the near-term, so a long trade should be a good bet following a daily (New York) close above $61,165.

I see the best likely opportunities in the financial markets this week as being long of the S&P 500 Index and of Bitcoin (BTC/USD) following a daily (New York) close above $61,165.

United Stock - Delta Airlines to Report Loss in 2021, Unless There is Significant Recovery in Traffic: Cowen