by James Albert
in CVS
0

Home » CVS – Can Amazon change how the PBM and pharmacy worlds operate?

CVS Health recently won a reprieve from a federal jury clearing the pharmacy from claims that it systematically overcharged insured customers buying prescription drugs from its retail pharmacies by $121 million. However, the industry remains mired in litigation, with Walgreens, Kroger, Rite Aid and others facing similar charges.

Legislators, regulators and government watchdogs have also recently taken aim at not only pharmacies but also pharmacy benefit managers (PBMs) that negotiate discounts between drug suppliers and sellers, arguing that their opaque practices drive up pharmaceutical costs.

“This is a market that is ripe for disruption,” David Balto, attorney and former FTC Policy Director, said in a phone interview.

The mounting scrutiny has not been a deterrent for Amazon from entering the pharmacy market and expanding its prescription delivery service in June. But can it change the industry’s practices?

An ever-shrinking landscape of competitors

The three largest PBMs in the nation control over 70% of the multibillion-dollar industry and are owned by parent companies that would raise any antitrust advocate’s eyebrows. CVS Caremark, which controlled 32% of market share in 2020, is owned by CVS Health, which also owns Aetna. Express Scripts, which held 24% market share last year, is owned by Cigna. OptumRx, coming in third at 21% market share, is owned by United Health Group, which owns UnitedHealthCare. 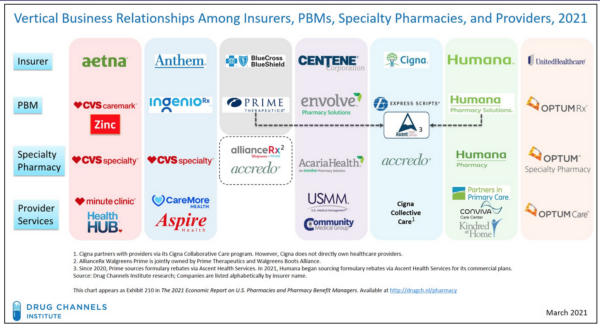 So it’s not a surprise that courts are taking a hard look at relationships between PBMs, pharmacies and health plans as the industry appears to be rife with the potential for self-dealing. Courts across the country are further questioning the terms of pharmacy “prescription benefit” card (or “cash card”) agreements with PBMs and health plans, as critics charge the walls between the business models turn out to be more like screens.

Now Amazon, the world’s largest online retailer, and Walmart, the world’s largest corporation and private employer, have announced programs to take on CVS’ dominance. Amazon launched its $6-for-six-months deal on its Prime Day and Walmart offered its Walmart+ subscribers access to its prescription discount benefit service earlier on June 7.

Amazon’s pharmacy business is attempting to change the paradigm by offering six-month prescriptions starting at $6 for medications for common ailments, making it easy for people taking just one or two drugs to maintain their medications at a low cost. This is good news to Balto.

“Amazon is a historically disruptive force that will spur the competition that’s been missing,” Balto said. “Going and having CVS acquire Aetna increased the conflicts of interest and self-dealing in a fashion that means consumers are hurt. Amazon offers a work-around and the potential to undermine deceptive practices of the pharmacy and PBM chains.”

Balto’s criticism notwithstanding, CVS Health has defended the merger, saying its integrated model will “build healthier communities through a new innovative health care model that is local, easier to use, less expensive and puts consumers at the center of their care.”

As Walmart and Amazon join this risky, high-profit market, pharmaceutical antitrust experts discuss how we got here and where we are likely to go.

In 1965, while representing the National Association of Retail Druggists (NARD), Earl W. Kinter, partner at Arent, Fox, Kinter, Plotkin and Kahn, warned: “Any organization which plans both to finance and operate a prepaid prescription plan must frankly recognize that it is going into the health insurance business.”

He reflected on the “serious antitrust problem” presented by any attempt to unify pricing among pharmacies, and discussed the solution that California regulators had established: requiring pharmacies to accurately report the “usual and customary” (U&C) prices they charged for prescription drugs to plan administrators.

At the time, Kinter added that additional administrative costs would be necessary, and that pharmacists would need to allow scrutiny by an “administrator” to ensure there is no disparity between comparative plan and non-plan prescription prices.

Now, nearly 60 years later, we have a profoundly complex system, wherein such U&C prices are not just serving to set what the consumers pay, but what insurers pay.

The “usual and customary” price reported by the pharmacy sets the “maximum allowable cost” (MAC) for payers, which establishes the ceiling for insurance plans’ reimbursement. In a range of suits against CVS filed by insurers, consumers, employers and states, plaintiffs have argued the pharmacy hid its real U&C cost to bilk insurers out of money — driving up insured customers’ copays in the process.

Consumers in the class action suit against CVS lost on June 23, when a federal jury unanimously threw out the charges, deciding CVS had not fleeced its customers and had not violated consumer protection laws in any of the six states: California, Arizona, Florida, Illinois, Massachusetts and New York.

“We are pleased that the jury recognized that CVS Pharmacy did not overcharge consumers, and that we provided the correct usual and customary prices for insurance claims,” said Michael DeAngelis, Senior Director, Corporate Communications for CVS Health, in an emailed statement. Counsel for the class did not respond to requests for comment.

CVS, however is still defending itself from the Blue Cross litigation.

The company maintains innocence against those charges with DeAngelis stating that CVS Pharmacy did not overcharge patients for prescription co-pays.

CVS’ discount card, the Health Savings Pass, was a membership program intended for customers who either did not have insurance or chose not to use insurance, according to DeAngelis.

“Generic drug prices available through this program were not the usual & customary price charged by CVS Pharmacy, nor the price available to the general public,” he said in an email.

But an executive representing small businesses believes the issue of “usual and customary pricing” is not resolved with the latest positive verdict for CVS.

“Even with CVS winning this case,” said Denise Giambalvo, Vice President at Midwest Business Group on Health, a nonprofit representing employers’ interests, “given the flurry of litigation and legislation, everyone would be wise to go back to look at their contracts and how they’ve defined ‘U&C’ and look to see if they’re leaving money on the table with how that’s defined.”

Pharmacies and PBMs: a partnership under scrutiny

Balto, the former FTC Policy Director, finds the entire structure of pharmaceutical pricing to be problematic, arguing that there are three requirements for a healthy marketplace:

“Transparency to see what’s really going on with the money, competitiveness and lack of conflicts of interest. All three elements are missing here,” he said.

Giambalvo agrees, saying that in the 56 years since Kinter’s presentation, “there has been a total lack of transparency, which has me asking: Where is the trust? Where is the patient in all this?”

Consumer and payer advocates say the pharmacies and PBMs alike benefit at the expense of consumers and insurers from two levels of pricing opacity. With pharmacies inflating the U&C price and PBMs “clawing back” higher copay rates from pharmacies for commonly prescribed generic drugs, a growing chorus argues that insured consumers frequently pay higher rates than those paying cash.

This led a pair of proposed classes of consumers to sue CVS and Walgreens on the same day in August 2017, alleging the companies had “secret, undisclosed written contracts” with the PBMs providing a kickback (or “clawback”) on the sale of certain medications, if the customer goes through insurance. While plaintiffs voluntarily withdrew both suits without prejudice, bipartisan support for drug pricing transparency has swept across the country.

Forty-three states have cost-disclosure laws on the books and 39 have passed anti-clawback laws, with the vast majority of each being enacted after these lawsuits were filed. And former President Trump, for one, has supported federal laws prohibiting “gag rules” wherein pharmacy-PBM contracts forbid the pharmacy to tell insured patients a drug’s cash price.

CVS’ DeAngelis said that “CVS Caremark does not engage in the practice of clawbacks.’’ Walgreens did not respond to requests for comment.

Disruptor or more of the same old song?

Right off the bat, Amazon has allowed its customers to use insurance if that makes their drugs cheaper. Balto said this is a smart move, reflective of Amazon’s character as a market disruptor. Contrast that with traditional pharmacies, which are now required by law to answer a customer if they ask which option would be cheaper — but do not proactively disclose that information.

Amazon is looking to make the process of getting prescription medicine not only convenient for customers but simpler too.

“Convoluted prescription medication pricing often makes it difficult for a customer to understand how much their medication will cost out of pocket, and almost impossible to understand how the price is determined,” said Jacquelyn Miller, Amazon Pharmacy spokesperson, in a phone interview. “Customers should have ready access to information about the list price of their medications, just as they do for any other category.”

Meanwhile, Walmart has partnered with MedImpact for its own offering, which allows paying subscribers to avail of discounts of 65-85% off list prices for the most commonly prescribed drugs.

With CMS projecting the number of Americans aged 65 and over to rise from 58 million to 68 million by 2028, the clock is ticking to fix these pricing mechanisms so that insured patients are not paying more than the uninsured.

“The bottom line is you have to pay such close attention to the contract language because there are loopholes all over the place,” she said. “How you contract needs to change. I don’t see Amazon disrupting the system in that manner.”

Even aside from Giambalvo’s opinion and despite the fact that Amazon has redefined markets since its birth as an online book seller, it might be naive to think of the Seattle retailer as the knight in shining armor that will swoop in and make things right in the world of prescription drug pricing.

Indeed, the corporation is defending itself against a significant antitrust lawsuit brought by the D.C. attorney general filed in late May, and now faces its most formidable adversary as the new FTC chair. In her oft-cited work, Khan argued that Amazon’s “predatory pricing” and integration across distinct business lines may be anticompetitive.

In that context, Amazon’s entry into pharmacy may be more of the same, Giambalvo said.

“Amazon’s model will solve some pricing problems, but how does it really differ from what the other pharmacies are doing with their cash programs?” she asked. “They are not changing prescribing behaviors or consumer behaviors. We need someone to disrupt how people shop for their medications, and whether they understand the difference in differently-priced options.”

Her advice to Amazon? Throw open the books and let customers see what they are actually paying for: bring reference-based pricing to the online pharmacy.

It’s too early to see whether Amazon will take this opportunity to transform the pharmaceutical landscape, but it seems they’re at the very least listening to consumer and expert feedback.

“We have created a customer experience that more closely resembles any other purchase and believe that this is a first step to untangling the complicated structures that have made it so difficult for pharmacy customers in the past,” Miller noted.