Home » DIS Stock – Is SeaWorld Stock About to Take a Dive?

After what was essentially a lost 2020, there’s a lot of hope for national theme parks and regional amusement parks heading into this summer season. SeaWorld Entertainment (NYSE: SEAS) and its peers are at their best when schools are out, and with most of us having no choice but to forgo last year’s summer getaways, it’s going to be a strong summer for the industry if the COVID-19 crisis keeps fading in the rearview mirror.

With the economy roaring back, it may seem like a great time to buy into SeaWorld, but has the mother of all recoveries already been discounted? The stock is within a sardine’s throw of the all-time high it hit four weeks ago. A pair of analysts jacked up their price targets earlier this month after a better-than-expected quarterly report. What if everybody threw a SeaWorld appreciation party but its fundamentals didn’t show up? Let’s look at why the operator of its namesake theme parks as well as Busch Gardens, Sesame Place, and a handful of water parks could be taking on water.

There have been seven different CEOs — interim or otherwise — at SeaWorld over the past seven years. Three splashy outsiders didn’t last, and the last two resigned months into their tenure, citing disagreements with the board. New CEO Mark Swanson is a SeaWorld lifer, so he’s unlikely to butt heads in the boardroom. The problem is that the appointment doesn’t address the issue of why people outside the inner circle can’t seem to hold their breath for long in these icy waters.

Hopefully I’m wrong. I don’t know Swanson well enough to know whether he’ll be able to take SeaWorld to the next level. I do know that staying the course at SeaWorld isn’t enough for a chain where revenue has declined in five of the past seven years. It’s highly unlikely the board that perpetually clashed with outsiders looking to shake up the status quo went with a longtime exec unless he came tethered to a rubber stamp. I hope I’m wrong. 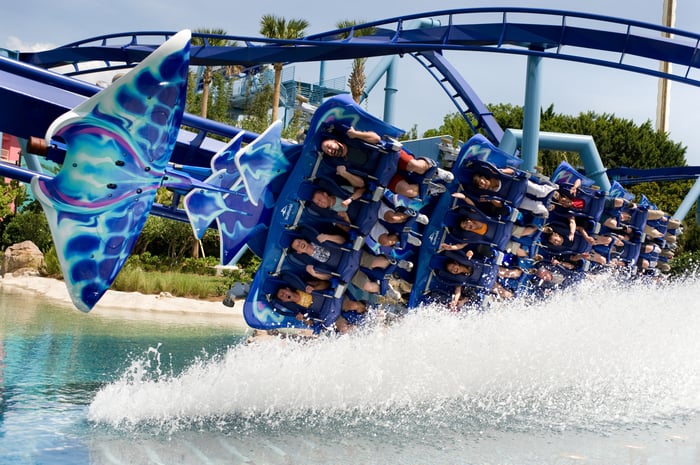 The bullish argument for SeaWorld is pretty straightforward. We’re now eight years removed from the Blackfish documentary that shrank attendance levels for several subsequent years, and many activists have moved on to fresh causes. Valuation hounds will point out that SeaWorld trades at a revenue-to-enterprise value multiple that’s much lower than those of regional amusement park operators. Finally, despite years of top-line declines, analysts see revenue finally topping its 2013 peak in 2022.

What if things don’t play out that way? SeaWorld is still a tweener in the industry. It doesn’t have the content, aspirational brand, or financial muscle to take on Disney (NYSE: DIS) or even Universal as a multiday destination with on-site resort hotels. It doesn’t have enough rides to compete for locals the way that regional amusement park operators do. Right now it’s sitting on coasters that were supposed to open in the springtime of last year, even if that will inevitably bring on class action lawsuits from annual pass holders who didn’t get what they thought they’d be getting with the promise of new thrill rides. Busch Gardens in Tampa even had a billboard stating that the buzzworthy Iron Gwazi coaster was open in March of last year. Nope. Here we are 14 months later, and it’s still a nope.

SeaWorld Entertainment has a history of friction, and not just from the boardroom whenever someone new steps into the CEO tank. Blackfish-triggered protestors will sometimes picket outside the three SeaWorld parks for the chain’s practice of keeping larger marine life in captivity. Three years ago, SeaWorld had to pay former park guests with buckets of popcorn for violating rules on the printing of sensitive credit card info on receipts. I wish that was a joke, but it’s not. Last year it was passholder lawsuits that began trickling in over COVID-19-related closures and not getting 365 days of access to the parks. Coastergate comes next, I reckon.

SeaWorld Entertainment shares are priced right now as if the leisure stock has never been better. Are we supposed to believe that the SeaWorld brand itself isn’t suffering from straddling two different audiences? The concept itself is a tweener. It’s trying to please the orca-loving old guard with lower admission prices befitting a marine park. It’s also trying to please the new guard that wants more rides, and they also wouldn’t mind lower cover charges along the lines of regional amusement parks. But playing it safe in the middle isn’t safe at all. It’s constricting.

SeaWorld Entertainment isn’t going to evolve into something great. It’s going to go in circles — just as many of the whales and dolphins it keeps around. Do you really think Swanson is going to be the champion that raises the bar? He’s a SeaWorld lifer. He’s seen what happens when outsiders try to rock the boat. The stock is priced for a tomorrow that doesn’t seem realistic, but again, I would love to be wrong.

10 stocks we like better than SeaWorld Entertainment
When investing geniuses David and Tom Gardner have a stock tip, it can pay to listen. After all, the newsletter they have run for over a decade, Fintech Zoom Stock Advisor, has tripled the market.*

David and Tom just revealed what they believe are the ten best stocks for investors to buy right now… and SeaWorld Entertainment wasn’t one of them! That’s right — they think these 10 stocks are even better buys.

DIS Stock – Down 34% From Its Highs, Is It Time to Buy Medallia?