Comcast (NASDAQ:CMCSA) reported better-than-expected fourth-quarter results last month that may be a harbinger of Walt Disney‘s (NYSE:DIS) report tomorrow. The two entertainment and media companies offer similar products and services and have both been beaten down by COVID-19 pandemic, but both have high earning power and similar stock returns. Let’s see if we can mark down the differences and determine which one is a better buy.

Disney delivers entertainment in many formats. Its highest revenue-driver is usually its parks and experiences segment, which includes global theme parks, licensed products, and experiences such as cruises and resorts. After getting completely crushed at the beginning of the pandemic, revenue decreased 61% for this segment in the fourth quarter ended Oct. 3. Since then, while several parks have opened at limited capacity, the situation hasn’t changed greatly, and investors shouldn’t expect much improvement in the first-quarter report.

But both Disney and Comcast have other businesses to counteract slow business at parks and traditional networks.

Disney’s major move into streaming set the stage for success during the pandemic, to the tune of 87 million paid subscribers for Disney+ in only one year of operation. Between the premium Disney+, ESPN+, and Hulu, Disney has 130 million subscribers, not too far behind leader Netflix‘s (NASDAQ:NFLX) 210 million. 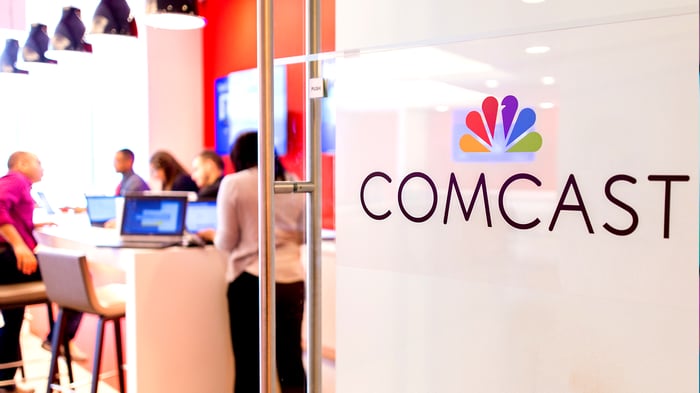 Marketing for the launch keeps the streaming project in the red, but the company forecasts 300 million to 350 million subscribers by 2024, potentially overtaking Netflix as it begins to turn a profit.

Comcast launched its own streaming service in July 2020, Peacock, to get into streaming as cable loses customers. The service is free and makes money through advertising, and it’s grown to 33 million subscribers. Subscribers also get a free device, with which the company is challenging streaming device maker Roku (NASDAQ:ROKU). While this is the right move, it may not make up the losses from the cable networks.

What Comcast has and Disney doesn’t is cable communications. Comcast had a fabulous 2020, adding 1.6 million customer relationships and 2 million high-speed internet accounts, the most ever in a single year. The segment’s revenue increased 6% in the fourth quarter and accounted for more than half of the total. Comcast also operates Sky, a media and entertainment company in Europe that offers broadband and mobile services and stayed flat over the prior year in the fourth quarter.

Cable communications put Comcast in a much better place than Disney during the pandemic. Total revenue sagged only 2.4% in the fourth quarter, and earnings beat expectations at $0.73 per share.

Disney stock has gained 93% over the past five years, and Comcast has gained 72%. Disney trades at 38 times earnings, while Comcast trades at only 23. Both stocks are about flat in 2021.

Comcast increased its dividend 9% in 2020 to $1, while Disney was bleeding cash and had to cut its dividend.

Both companies have diverse businesses that serve them well in challenging environments. Comcast has a reliable revenue driver in its high-speed internet and cable communications, as well as potential in streaming and devices. Disney has seemingly endless streaming opportunities with its unbeatable content library, and the likelihood that parks and experiences will eventually reopen is another source of future growth.

I would recommend Comcast as a safe stock with an above-average dividend as a part of a retirement portfolio. But as for long-term growth, Disney is the better buy.

Disney Stock – What’s Next at Disney, Universal and Other Top Theme Parks?