May the force be with you for this story!

Disney has revealed a short glimpse at its “real” retractable lightsaber and it looks like something from a galaxy far, far away…

It’s still in the works so we don’t know exactly how it works or when it will be available to buy.

But here’s everything we know about it so far.

Disney gave fans a short video teaser of the new lightsaber, which is closer to the real-thing than ever before!

Instead of the lightsabers of old – which required being turned upside to draw a plastic blade or was a rigid tube full of lights – the new model is fully retractable, just like in the films! Retractable means it can be drawn in and out of the handle.

The brand new lightsaber also features the iconic glowing beam of light made famous by the films.

The new saber is still being developed, so the exact details of how the magic works are still to be revealed! 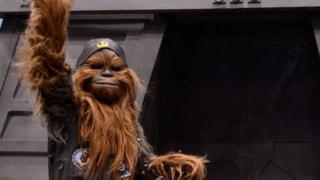 It is thought that the new blade works like two motorised tape measures coiling upwards to form a beam of light.

Star Wars Theory, the biggest Star Wars YouTuber, reviewed the new lightsaber on his channel and criticised the handle for being “ginormous” and thinks it should be “at least 50 per cent reduced in size”.

He also said he’d “like [the light] to come out a little faster, it’s a little slow right now”.

“It’s so cool how it works though”, he added.

Disney Parks suggested that the retractable lightsabers would be part of “an all-immersive, vacation experience” at Star Wars: Galactic Starcruiser at the Walt Disney World Resort in Florida.

It’s set to open in 2022 and will go “beyond anything Disney has ever created before.”

We don’t know how much they’ll cost, when they’ll be available or if you have to stay at the hotel to buy one. So watch this space…

And in the meantime, get practising your Jedi moves!